Fearless: The Collection of Hester Diamond Part I

D ynamic, unpredictable, and incomparable, Hester Diamond was a fearless and visionary collector. Whether through the expressive qualities of the paintings and sculpture in her apartment, the electric colors of her furniture, or in the mesmerizing patterns of the textiles she chose, each piece in her collection personifies Hester’s distinct vision and the freedom that came with being true to herself. The ability to pursue her passions with such conviction and clarity not only propelled Hester to build an extraordinary career as a venerated art dealer and interior designer, but, in a remarkable feat, to assemble important collections of both Modernist works and Old Master Paintings and Sculpture from the ground up that were of equal quality and breadth. Hester was a prolific and passionate collector and traveled extensively in search of quality. She acquired masterpieces by art historical titans such as Bernini and Dosso Dossi, but also recognized the beauty in the hands of anonymous masters, and the fresh viewpoints of contemporary voices like Barry X Ball and Bill Viola. The ease in which Hester displayed art and objects across time periods demonstrated the frivolity of artificial barriers imposed among collecting categories, and she proved that they could be broken and lived with comfortably.

Learn More about The Collection of Hester Diamond
Hester Diamond: The Life of a Fearless and Visionary Collector

Following the guidelines for the Phase Four reopening of Manhattan, we are able to accommodate clients in our building by appointment only. The exhibition for this sale will open on 23 January and will close on 28 January at 5 PM EST. To schedule an appointment please click here or contact appointmentsNY@sothebys.com or +1 212 606 7171. You can read more about our safety requirements here. 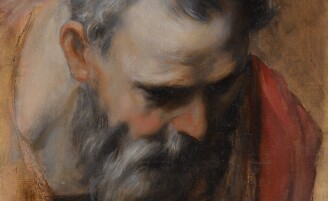 F ew artists have changed the history of art as dramatically as Gian Lorenzo Bernini. Even if he had died at twenty-five, he would be remembered as the greatest sculptor since Michelangelo, and as one of the supreme protagonists in the history of Western art. In his formative years Gian Lorenzo brought sculpture to a level never before imagined and gave life to a new figurative language, the Baroque, which dominated all of Europe for nearly two centuries.

This exceptional and powerful figure of Autumn is an indisputable early masterpiece in which Gian Lorenzo Bernini’s direct involvement can be identified. It is one of a handful of sculptures by Gian Lorenzo and his father, Pietro, from this period, examples of which are in the J. Paul Getty Museum and the Metropolitan Museum of Art.

Carved in around 1616, when Gian Lorenzo was eighteen years old and still working on the commissions given to his father, Autumn was made for Prince Leone Strozzi, one of the Berninis’ first major patrons in Rome. Autumn’s dynamism and expressiveness betray the virtuoso skill of a master and a young genius who revolutionized the outmoded Mannerist sensibility of his father. This exceptional marble figure represents the young sculptor’s bravura and the moment when Gian Lorenzo began to eclipse his father in skill and conception. 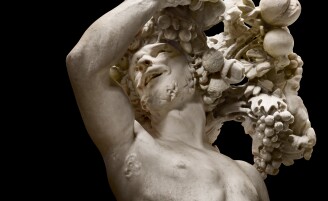