1. Rembrandt was born Rembrant Harmenszoon van Rijn in 1606, though he is now generally referred to as simply Rembrandt. Harmenszoon indicates that his father was named Harmen, and van Rijn refers to his hometown near the Rhine River. He added the silent ‘d’ to his signature for reasons unknown, in 1633.

2. He was one of the leading painters of the Dutch Golden Age, and is remembered for his dramatic use of light and shadow, his versatility, and most specifically, his portraiture.

3. He was born in the city of Leiden, but abandoned his university studies to devote himself to painting, and completed his training in Amsterdam under Pieter Lastman, who specialized in historical and biblical subjects.

4. In 2016, ING and Microsoft collaborated to produce “The Next Rembrandt,” a 3D printed object that closely resembles a Rembrandt painting. The machine-learning algorithms used specific data points like color, geometry and texture to mimic an authentic Rembrandt painting.

5. Almost immediately after moving to Amsterdam in 1631, Rembrandt expanded his business; he became a burgess of Amsterdam and a member of the local guild of painters, acquired some students, and entered the lucrative market for portraiture – the genre for which he would become renowned.

6. Although contemporary and classical Italian masters had great influence on Rembrandt through his training, the artist never actually left the Dutch Republic during his lifetime.

7. Rembrandt’s early work is signed with his Latin Monogram: RHL (Rembrandus Hermanni Leydensis.) He then switched to RHL-van-Rijn, and eventually settled on simply Rembrandt as his signature for the majority of his career.

9. The theme song of the popular sitcom Friends was written and performed by the band The Rembrandts, named after the Dutch artist.

“Rembrandt goes so deep into the mysterious that he says things for which there are no words in any language. It is with justice that they call Rembrandt ‘magician’ that’s no easy occupation.”

10. By 1632, he was already demonstrating his versatility and impressive range. He produced mythological, biblical and allegorical scenes in addition to landscapes and portraits, both in paintings and etchings. He experimented with saturating large areas with color and intense chiaroscuro to achieve unprecedented levels of psychological character in his sitters, as well as dramatic interior and exterior scenes.

11. Despite his commercial and financial success, by the late 1640s, Rembrandt had overspent his fortune, could no longer pay his mortgage, and had to declare insolvency. He sold his house, many objects and paintings from his collection, and his printing press. He moved his family into a smaller home, and never financially recovered, eventually dying in poverty.

12. Rembrandt sustained a significant and influential legacy for painters of later generations. Vincent van Gogh explained the meaning Rembrandt carried for him, “Rembrandt goes so deep into the mysterious that he says things for which there are no words in any language. It is with justice that they call Rembrandt ‘magician’ that’s no easy occupation.”

13. In 1634, Rembrandt married Saskia van Uylenburgh, the cousin of one of Rembrandt’s first dealers, Hendrick van Uylenburgh. Saskia gave birth to four of Rembrandt’s five children, although three of them died in infancy. Saskia died in 1642, probably of tuberculosis, prompting Rembrandt to produce some of his most successful works: dark portraits of his sick and dying wife. After Saskia’s death, he had a child, Cornelia, with his former maid Hendrickje Stoffels, who later became his common law wife. Cornelia was Rembrandt’s only living immediate family member at the time of his death.

14. Rembrandt was known for his history paintings and portraits commissioned by patrons, but he also pushed forward the genre of self-portraiture. The exact number of his self-portraits is unknown, but scholars have attributed at least 40 and as many as 90 authentic self-portraits by his hand.

15. In addition to his paintings, Rembrandt was quite prolific in printmaking. He was capable of achieving extraordinarily intricate detail on a small scale in etchings. These prints were widely disseminated, and launched Rembrandt into international fame that was no longer limited to the Dutch Republic.

16. The Night Watch commissioned by the civic militia, is one of Rembrandt’s best-known works. The painting’s official title is The Militia Copany of Captain Frans Banning Cocq, but is referred to as The Night Watch because of the dimmed and dark atmosphere in the scene. Conservators have since discovered that the darkness is a result of the varnish and some damage, and that the original painting was actually diffused with bright sunlight.

17. After the completion of The Night Watch, the work was cut down on all sides to fit its second home in Amsterdam Town Hall. The original piece had two full figures on the left side, which are now missing, as well as a balustrade and steps which had given the work more depth. 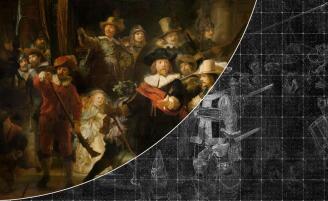 The Most Famous Artworks in the World
Rembrandt van Rijn's 'The Night Watch', A Masterpiece with a Violent History

18. Rembrandt’s innovations extend past his handling of light and shadow. In arranging his group portraits, he broke the convention of stately and formal figural compositions, and shifted toward mid-action scenes of movement. His grouped figures appear preparing for missions, relaxing together in a jovial manner, or naturally arranged around a single focal point.

19. When a nineteenth century critic referred to the work of Auguste Rodin in the same vein as that of Rembrandt, Rodin responded: “Compare me with Rembrandt? What sacrilege! With Rembrandt, the colossus of art! We should prostrate ourselves before Rembrandt and never compare anyone with him!”

"Compare me with Rembrandt? What sacrilege! With Rembrandt, the colossus of art! We should prostrate ourselves before Rembrandt and never compare anyone with him!"

20. Some scholars have posited that Rembrandt may have suffered from ‘stereo blindness’ meaning he had insufficient depth perception. This problem have helped him in painting three dimensional scenes on two dimensional surfaces.

21. Rembrandt died in 1669 at the age of 63. Because he had lost most of his fortune, he was given a funeral that was customary for the poor. He was buried in an unknown grave owned by the church, despite his atheism. His remains were later dug up and destroyed, a common custom for remains of the poor. 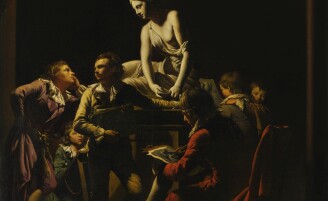