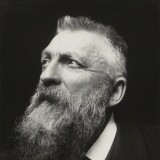 Born 1840. Died 1917.
Interested in selling a work by Auguste Rodin?
Request an Estimate

Works by Auguste Rodin at Sotheby's

Considered the forefather of modern sculpture, Auguste Rodin created works were imbued with a passionate realism. Born in Paris in 1840, Rodin was rejected by the École des Beaux-Arts three times and was largely self-taught. Early on, he worked a variety of jobs, mainly as a craftsman of architectural embellishments. In 1870, the artist moved to Belgium for six years where he continued to work as a craft designer. During these years he travelled to Italy where he was deeply affected by the work of Michelangelo. returning to Paris in 1877, Rodin was invited by his former employer Albert Carrier-Belleuse to work at the Sèvres national porcelain factory as a designer. He saw increased acceptance in the French art world during these years. Through his friendship with Edmund Turquet, a secretary in the ministry of fine arts, Rodin won several major commissions, completing his famous Gates of Hell of 1880, which included the figures of his most lauded works The Thinker and The Kiss. Rodin’s career continued to blossom and in the late years of the 1890s created both his monument to the city of Calais, The Burghers of Calais, and a memorial sculpture to Honoré de Balzac.

Rodin worked prolifically throughout his life until his death in 1917 at the age of 77. Works by Rodin fill museums throughout the world including the Musée Rodin, Paris, founded in his honor in 1916, as well as the Brooklyn Museum and the Metropolitan Museum of Art, New York. According to Sotheby’s Mei Moses, the average compound annual return for Auguste Rodin resold at auction between 2003 and 2017 was 10.8%. 85.5% of 159 such works increased in value.

Museums with Works by Auguste Rodin

Artist Image: © National Portrait Gallery, London
Please note that prior performance of the indexes and realized returns contained herein does not guarantee future results. In addition, there is no guarantee that random collections of individual works of art or stocks will yield index returns. We are not financial advisors and we are not in the business of recommending art as an investment. We also have no comparative advantage in forecasting the future direction of the art market. Investment decisions should be based on the risk return tolerance and time horizon of the investor with, if desired, the support of a licensed financial advisor. This information is provided "as is" and with no representations or warranties either express or implied of accuracy, merchantability, fitness for a particular purpose or of any other nature are made with respect to this information or to any expressed views presented in this information.