1. Caravaggio was orphaned at a young age.

Caravaggio was born in 1571, when the bubonic plague was still ravaging much of the population of Europe. His father, grandfather and grandmother each died of the plague in the span of three days when Caravaggio was just six years old, and his mother succumbed to the disease four years later. At the age of twelve, he began an apprenticeship in the studio of Simone Peterzano, which secured his career as an artist when he was still a child. The artist’s real name was Michelangelo Merisi, though he was ultimately named after the town where he spent much of his early childhood, Caravaggio.

2. Caravaggio’s works were in the service of the Counter Reformation.

In the late 16th and early-17th centuries, the Catholic Church was building a campaign known as the Counter Reformation as a response to the Reformation, which would counter the growing threat of Protestantism. As part of this program, the Church turned to painters, sculptors, and architects to visually confirm the dominance and power of Catholicism and woo back Catholics who had converted to Protestantism. Caravaggio’s paintings synthesized the two major approaches to artistic production during this period, of both theatrical, highly dramatic light and compositions, alongside scenes which welcome believers of all social echelons, painting religious figures in dark, dingy taverns, filled with the poor and marginalized members of society.

Caravaggio was a pioneer of tenebrism, a technique which implements intense chiaroscuro (an effect of contrasted light and shadow) for dramatic ends, dominating the painting with darkness and producing a spotlight effect. The theatricality of tenebrism was a key element of Baroque painting and stemmed from the chromatic experimentation of Mannerism. Caravaggio’s facility with tenebrism was matched by his observational naturalism, which allowed for heightened intellectual and emotional engagement with the contemporary viewer.

Caravaggio died young at the age of 38, but while he lived, he was a highly prolific artist who consistently produced large-scale paintings. His observational technique lent itself to working rapidly and intuitively; he preferred painting directly onto the canvas without sketches or drawings, and usually painted from live models. He would work in an intense fury, often staying up all night, or famously painting for two weeks straight.

5. Caravaggio was a dangerous criminal.

Caravaggio had a reputation for a short temper and was quick to fall into bar or street brawls. He committed relatively light but bizarre infractions, such as swearing at a constable or roaming with an unlicensed sword. In one instance, he cut a hole in his ceiling to allow more natural light while painting; this impromptu carpentry gave his landlord cause to throw him out. Beyond this, he was brought to trial for significant crimes at least eleven times, including scarring a guard and throwing a plate at the face of waiter because he believed his undercooked artichokes were an insult. 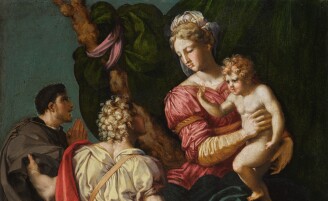 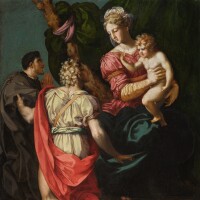 6. Caravaggio once killed a man in a duel.

Art historians continue to debate the specific details and context of the death of Ranuccio Tomassoni, though he certainly died at the hands of Caravaggio. Tomassoni was a Roman pimp who had somehow insulted a prostitute whom Caravaggio admired. Caravaggio asked Tomassoni to play a game of tennis as a cover to start a duel. Some scholars believe the tension between the two started over a gambling debt, while others believe Caravaggio did not intend to kill Tomassoni during a brawl over the tennis game.

7. He spent some of his later years in exile.

As punishment for Tomassoni’s murder, Caravaggio was issued a death warrant, which could be executed at any time in Rome. He fled to Naples, where he hid in the homes of noble families including the Sforzas and the Colonnas, and to Malta, an independent sovereignty that welcomed him safely. Throughout his exile he continued working, traveling to Sicily to paint some of his most beloved and influential works, including The Beheading of Saint John the Baptist.

8. He escaped from prison after assaulting a high-ranking knight.

While in Malta, Caravaggio was offered a knighthood by the Grand Master of the Knights of Saint John, which would have presumably secured Caravaggio a pardon for his death warrant. However, he assaulted a higher-ranking knight during another brawl, which left Caravaggio in prison and stripped of his knighthood. He escaped and made his way to Sicily, where he lived in constant fear. His paranoia was founded in reality; a group of men ambushed and attacked him, likely in retaliation for the attack on the knight in Malta, leaving his face permanently disfigured.

9. He tried to leverage paintings for a pardon from a death warrant.

Throughout his four years in exile, he was in constant pursuit of a pardon from the Pope for his death warrant after having murdered Ranuccio Tomassoni. He sent paintings including David with the Head of Goliath and Salome with the Head of John the Baptist to powerful friends and family members who had the ear of the pope, with the hope that they could mediate a pardon. He died before ever being pardoned.

10. The subsequent artists whom he influenced were called the Caravaggisti.

Caravaggio and his work left enormous impacts on the artists of each city he visited. Many artists of his time and of the generations that followed incorporated Caravaggio’s tenebrism and truncated compositions, and often referred to themselves as Caravaggisti. In Rome, Bartolomeo Manfredi, Carlo Saraceni, and in particular, Artemesia Gentileschi looked to Caravaggio as the forefront of the cutting edge of painting. In Naples, Battistello Caracciolo and Carlo Sellitto led the Neapolitan Caravaggisti. His works had influence on major artists around western Europe, including Rubens, Rembrandt and Velázquez.

11. The Italian mafia may have stolen a Caravaggio painting.

In 1969, Caravaggio’s Nativity with St. Francis and Saint Lawrence was stolen from the Oratory of Saint Lawrence in Palermo. Although the work has never been found, members of the Italian mafia have claimed that the painting was often on display at major meetings and gatherings of high-ranking mafia members, but that it had been damaged and subsequently destroyed. The work was valued at approximately $20 million.

12. Although he was a beloved artist of his time, his work also garnered consistent criticism from shocked Catholics.

Caravaggio’s work and ability were admired throughout his lifetime, and contemporary artists regarded him as a master of painting. However, at times his works are controversial. Some contemporary critics view the heightened naturalism in Caravaggio’s paintings as unnecessarily brutal, noting that it diverges too drastically from the idealization of High Renaissance Masters. Although his paintings were in the service of the Counter Reformation, some devout Catholics found offense with biblical scenes populated with drunkards, or Saints modeled on prostitutes. 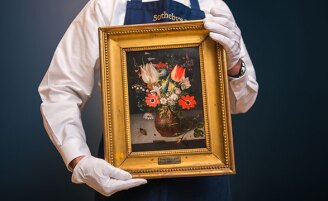 13. His cause of death is still unconfirmed.

Scholars continue to debate the cause, details and timeline of Caravaggio’s death. He died at some point in July of 1610, while attempting to obtain a papal pardon and return to Rome, perhaps even aboard a boat heading northward. Some historians claim he probably died of syphilis, malaria or brucellosis. Others believe he was murdered as retribution for Tomassoni or the knight he assaulted in Malta.

In 2010, human bones were found in Porto Ercole that scientists have concluded are likely those of Caravaggio. The bones reflected a toxic level of lead – almost certainly from the paint with which he worked quite physically and messily – which could have killed him. The artist’s reputation for erratic and violent behavior, which is a common symptom of lead poisoning, bolsters this theory.

15. One of his most famous paintings, The Calling of Saint Matthew has not been moved in over 400 years.

Caravaggio’s style of utilizing dramatic tenebrism, the spotlight effect and brooding scenes in dark taverns left a significant impact on visual culture, the reverberations of which continue to appear in works by contemporary artists. Martin Scorsese explained that he referenced Caravaggio in Taxi Driver and Mean Streets: “It’s basically The Calling of St. Matthew but in New York!” The poet Thom Gunn wrote works in response to Caravaggio’s paintings in the twentieth century.

17. Pope Francis is an ardent fan of Caravaggio.

Pope Francis explained that he has often visited and contemplated The Calling of Saint Matthew and other Caravaggio works. In reference to Matthew’s figuration in the major work, Pope Francis stated, “This is me, a sinner on whom the Lord has turned his gaze.”

18. He painted himself as an interpretation of Bacchus while convalescing from malaria.

Caravaggio painted himself into a number of his paintings, but appears most shockingly as a young sickly Bacchus in a portrait from 1594. He observed himself in a mirror while producing the painting, directly after having left the hospital for a grave disease, which scholars believe to have been malaria. Bacchus, who physically resembles Caravaggio in the painting, appears thin, pale, and nearly mad with illness. The painting retains Caravaggio’s focus on the contrast between the painting’s subject and the intense darkness which surrounds him.

Because of Caravaggio’s status as a Baroque master, his works are not often available for sale, particularly on the public market. His second version of Judith Beheading Holofernes, discovered in a French attic in 2014, garners an estimate of $170 million. The work was set to go to auction in June 2019 (for no reserve) but was acquired via a private sale at the last moment; the final purchase price remains confidential.

20. Both Tilda Swinton and Sean Bean’s filmic debuts were in a fictionalized biography of Caravaggio.

The 1986 British film Caravaggio directed by Derek Jarman retold the story of Caravaggio’s life with some dramatic, artistic license. Although the movie presents the characters in costumes and architectural settings that were contemporary to Caravaggio’s time, the movie incorporates a motor bike, a typewriter, and cigarette smoking to build the character of Caravaggio. The film won the Silver Bear at the 36th Berlin International Film Festival.

Caravaggio’s epitaph, composed by his friend Marzio Milesi, reflects a beloved artist. “Michelangelo Merisi, son of Fermo di Caravaggio – in painting not equal to a painter, but to Nature itself – died in Porto Ercole – betaking himself hither from Naples – returning to Rome – 15th of August – in the year of our Lord 1610 – He lived thirty-six years nine months and twenty days – Marzio Milesi, Jurisconsult – Dedicated this to a friend of extraordinary genius.”