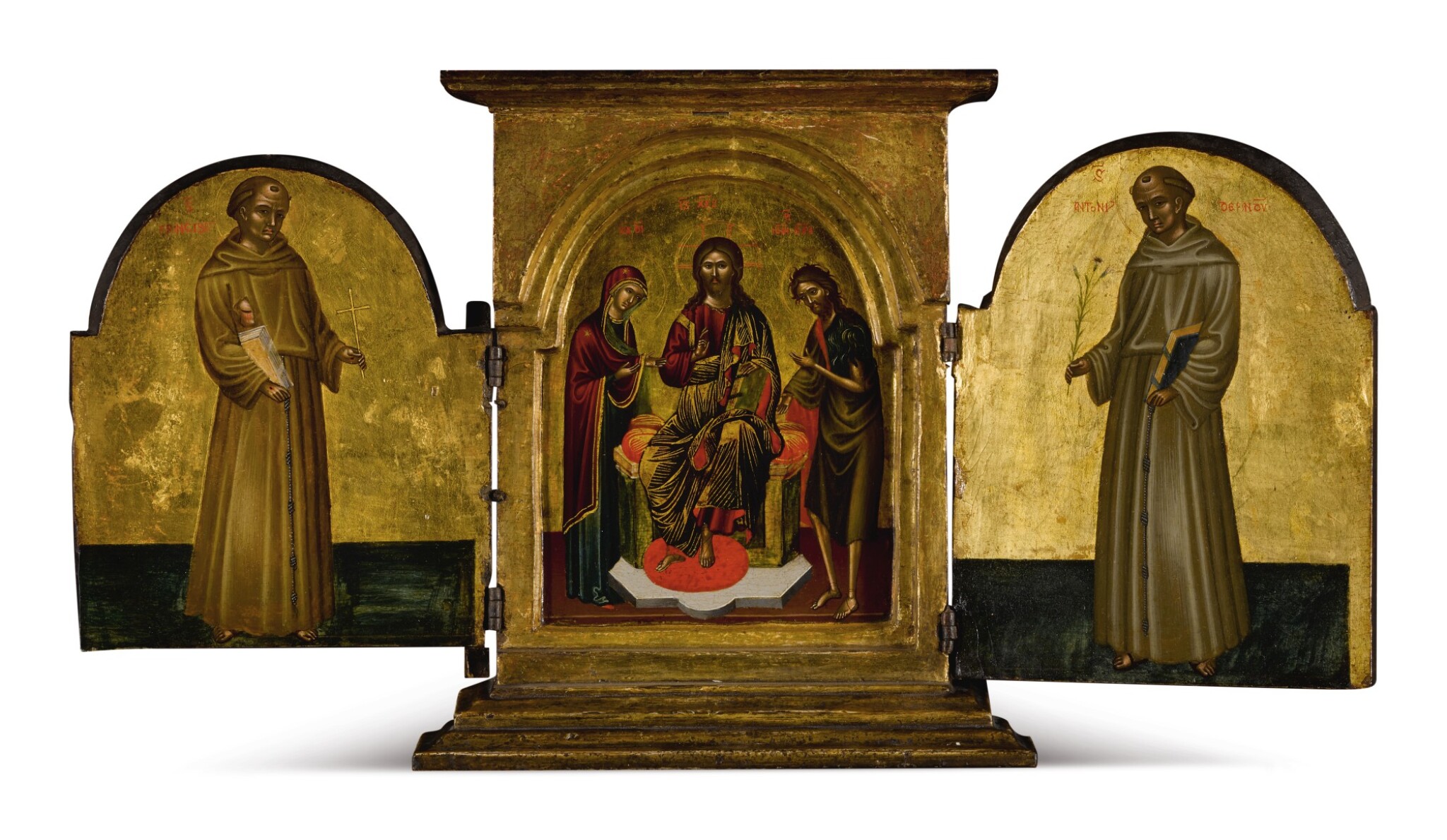 tempera and gold ground on panel

This triptych is in remarkably good condition, particularly in light of its age and domestic use. All the images have been restored at a high level of quality and precision. The largest areas of loss are, not surprisingly, found on the outermost face showing Veronica's veil, where portions of the faux marbling along the left and right sides, especially adjacent the hinge hardware, have been reconstructed, and along the bottom edges of the wings. It seems likely these are areas that would have been most exposed to handling over time. The Sudarium is otherwise nicely preserved, with an irregular loss is found in the left half of the face and scattered minor losses in the red backdrop. The majority of the restoration of St. George slaying the dragon concentrates on losses around the perimeter of St. George's billowing red cloak and through his dark blue tunic, with smaller scattered retouches to minor losses. While the gold grounds surrounding Saints Francis of Assisi and Anthony of Padua have been widely reinforced with new gold leaf, the paint layers are quite well preserved; here retouching almost exclusively addresses typical age-related increased transparency in the paints used for the garments. In the central panel scattered minor losses have been restored, along with the right half of Christ's neck. All faces of the triptych appear to be coated with a natural resin varnish which is clear and evenly gloss. Structurally, the triptych appears sound.

This fascinating triptych combines elements of Byzantine and Italian style and iconography, as is typical of the work of Nikolaos Tzafouris, an icon painter from Venetian-controlled Candia, Crete (modern-day Heraklion). Although the Byzantine and Latin churches could not officially reconcile, there was rich artistic and cultural exchange between them, and Tzafouris found many patrons for his hybrid works in the port city of Candia.1 It has been suggested, due to the combination of Latin and Greek inscriptions throughout the work, as well as the combination of typically Byzantine and Roman iconography, that the original owners of this triptych were a bilingual family with both Greek Orthodox and Venetian Catholic members.

When the polyptych is closed, the outer door shows the Sudarium of Veronica, the cloth on which Jesus wiped His face on his route to Calvary and on which His miraculous image appeared. The cloth is rendered in perspective with its edges overlapping the faux porphyry frame while the face of Jesus is more schematic, in keeping with the tradition of icon painting. Opening this door reveals St. George on horseback slaying the dragon at left and St. Anthony of Padua on the right. Astride a rearing white horse, St. George wears Cretan gold armor over a green velvet suit and a red cape and plunges a spear into the cowering dragon’s mouth. The composition is active, with naturalistic landscape details and folds in the velvet suit indicated subtly, but George’s face remains stoic. St. Anthony of Padua on the right stands before a solid gold background wearing his western monastic attire with tonsure and cincture, holding a flower and a Bible.

Opening the triptych still further reveals behind St. George the central image of the Deesis, and on the left wing, St. Francis of Assisi. Posed to mirror St. Anthony, St. Francis likewise wears western monastic garb and holds a cross and Bible, with the stigmata on his hand and side visible, the latter wound appearing prominently. The central panel, which would be shown only on special occasions, depicts Christ seated on a stone bench with red cushions, offering a blessing and holding the Bible on His lap. On the left is the Virgin in a blue dress and deep red mantle adorned with stars, and on the left, St. John the Baptist, barefoot in a hair shirt and a just-visible red robe. The Deesis is a powerful Byzantine image representing, with the Baptist, the end of the Old Testament, and with Mary, the beginning of the New Testament. Both the Virgin and the Baptist supplicate Christ on behalf of all humanity, and Christ Pantocrator (Almighty) unites beginning and end. The combination of a Byzantine central icon with Saints Francis and Anthony, popular in Roman Catholicism, highlights the cross-cultural nature of this triptych and of panel painting in the Mediterranean in the late-fifteenth century.

1. See A. Labatt, “The Religious Relationship between and the West.” In Heilbrunn Timeline of Art History. New York: The Metropolitan Museum of Art, 2000–. http://www.metmuseum.org/toah/hd/rrbw/hd_rrbw.htm (October 2004).