By Zoë Vanderweide
Claude Monet is among the most celebrated Impressionist painters of all time. His magnificent 1908 work, Nympheas, is the top lot in Sotheby's upcoming Impressionist & Moderrn Art sale on 19 June.

1. Disillusioned with the Académie and the salon system, Monet and others founded the Impressionist movement…

In 1862, Monet entered the studio of the Swiss painter Charles Gleyre. Alongside like-minded artists Pierre-Auguste Renoir, Frédéric Bazille and Alfred Sisley, he began to refine his visual language and technique. In 1874, Monet and others whose works were often rejected at the conservative Salon de Paris (including Renoir, Edouard Manet, Edgar Degas, Paul Cézanne and Camille Pissarro) formed the Anonymous Society of Painters, Sculptors, and Engravers and organized an independent exhibition. It would later became known as The First Impressionist Exhibition.

2. …Which derives its name from Monet’s Impression, Sunrise.

Displayed at the 1874 exhibition, the painting depicts a hazy scene at the port of Le Havre. The critic Louis Leroy disparagingly referred to the painting as “Impressionistic”, commenting that “Wallpaper in its embryonic state is more labored than this seascape!” The term, however, was soon enthusiastically embraced by the budding movement.

3. Before becoming a painter, he was a popular caricaturist.

By the age of 15, Monet had made something of a name for himself with his charcoal caricatures of various Le Havre locals. The pieces, which he sold for 10-20 francs each, were signed “O. Monet” (His first name is Oscar; Claude is his middle name).

4. He was drafted into military service and spent a year in Algeria.

In 1861, at the age of twenty, Monet was drafted into he First Regiment of African Light Cavalry. His father, despite having the means, declined to purchase the 2,500 franc exemption from conscription when Monet refused to give up painting. Monet served for one year in Algiers until he contracted typhoid; his aunt then stepped in to remove him from the army on condition that he would complete a formal art course. While no works from his time in Algeria survive, Monet later reflected that “the impressions of light and color that I received there…contained the germ of my future researches.”

5. Monet was inspired by Japanese art.

Over his lifetime, Monet amassed an impressive collection of Japanese Ukiyo-e wood block prints, many of which are still on view at his Giverny home. While his fascination with Japanese culture is evidenced in his earlier work on a more superficial level, as in La Japonaise (Camille Monet in Japanese Costume) (1876), he later incorporated the ethos of Japanese “pictures of the floating world” on a much deeper level. The Japanese-style bridge and waterlily pond that he designed became Monet’s predominating subject matter in the last decades of his life.

6. His friend and mentor, Eugène Boudin, introduced him to en plein air painting.

In 1856, a teenage Monet met Boudin on the beaches of Normandy. Boudin instructed his protégé in the techniques of painting outdoors and instilled in him a deep appreciation for the play of light on natural forms. The dynamic plein air style became a hallmark of the Impressionist movement; Monet later acknowledged: “If I have become a painter, it is entirely due to Eugène Boudin.”

7. Fascinated by the effects of atmosphere on light and color, Monet created many studies of the same subject observed under different conditions.

Monet produced numerous series examining the effects of the time of day, seasons, and weather conditions. These include the Haystacks series of 1890-91, the famous Rouen Cathedral paintings of 1892-94, and the over 250 Water Lilies that Monet painted in the last decades of his life. His series paintings diverge from his earlier and more spontaneous work in their careful and deliberate creation. Pop Art and Minimalism are both influenced by Monet’s pioneering interest in the serial display of objects.

Shortly after the birth of his first son, Monet and his family were living in poverty; his father did not approve of his relationship and career and had cut him off financially. Struggling to support his family and frustrated by the French art establishment, Monet attempted suicide by jumping off of a bridge into the Seine River. While he survived and went on to engage a group of like-minded artists with whom he would found the Impressionist movement, Monet would continue to struggle with bouts of depression throughout his life. 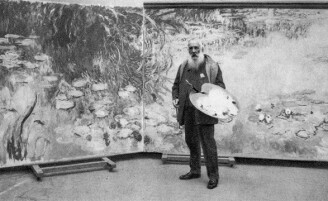 9. During the Franco-Prussian war, he and his family fled France.

In 1870, the Monets took refuge in London. During this time, he studied the works of the English landscape artists John Constable and J.M.W. Turner. He also met his first art dealer, Paul Durand-Ruel. In 1871, the family left London for Zaandam in the Netherlands. There, he made 25 paintings and reportedly came under police scrutiny for “revolutionary activities.” He returned to France later that year, settling in Argenteuil.

10. Later in life, Monet developed cataracts, which give the paintings from this period a reddish tone…

He was diagnosed with cataracts in both eyes in 1912 at the age of 72, from which he suffered until undergoing surgery in 1923. Nuclear cataracts have the effect of absorbing light, desaturating colors, and making the world appear more reddish yellow. Consistent with these perceptual changes, Monet’s paintings of water lilies and willows at this time become more abstract, with a notable color shift from the blue-green spectrum to muddier yellows, pinks, and reds. While Monet himself was deeply troubled by the effects of vision loss on his work, paintings from this period are nevertheless recognized as an important bridge between Impressionism and modern abstraction.

11. …And following corrective surgery, it is believed that he could see colors on the ultraviolet spectrum.

In 1923, Monet underwent cataract surgery on his right eye; he refused, however, to have his left eye operated on. As a result, he could see violets and blues through his right eye but not his left. It is also believed that due to the removal of the lens, which filters out ultraviolet wavelengths, Monet began to perceive—and paint— a spectrum of color typically unseen by the human eye.

While Monet saw financial and critical success in the latter part of his career and was well known in artistic circles, a major revival of interest in his work occurred in 1940s New York with the birth of Abstract Expressionism. These artists drew on Monet’s use of scale, composition, and semi-abstraction, sparking an enduring renaissance of appreciation.

13. Monet created a bateau-atelier, or studio boat, from which he painted many of his water-scene works.

Monet was inspired by Charles-François Daubigny, a Barbizon school painter, who, in 1857, had first built a studio and a small shelter on his boat to bring him closer to the water he so-often painted. Daubigny was an influential Pre-Impressionist and a close friend of Corot. Monet took up this "boat studio" himself and which he made the subject of several of his canvases.

14. In honor of the end of World War I, Monet donated a series of monumental Nymphéas to the French government.

Installed in 1927 at the Musée de l’Orangerie in Paris, the eight paintings from his over 60 Nymphéas, each measuring 14 feet wide, are exhibited according to Monet’s wishes in an immersive elliptical display. The result, in the words of the artist, is “the illusion of an endless whole, of a wave with no horizon and no shore.” The French painter André Masson famously hailed it as the “Sistine Chapel of Impressionism”. 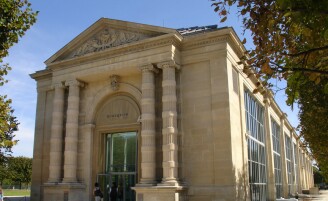 15. His favorite model was his first wife Camille Monet (née Doncieux), who appears in over 30 of his paintings.

The two met in 1865 and were married in 1870. Doncieux, who also modeled for Renoir and Manet, is featured in numerous works including the 1866 painting Camille (The Woman in the Green Dress), and Women in the Garden (1866-67), for which she posed for all four figures. Shortly after the birth of their second child, Camille tragically died at the age of 32, probably from pelvic cancer. A grieving Monet painted her for the last time in Camille Monet on her deathbed (1879). The art critic John Berger described the painting as “a terrible blizzard of loss…there can be very few death-bed paintings which have been so intensely felt or subjectively expressive.”

Alice and her then-husband, Ernest Hoschedé, impoverished by debt, moved in with the Monets in 1878. Soon after Camille’s death, rumors began to swirl about Monet’s relationship with Hoschedé. They were eventually married in 1892 after the death of Hoschedé’s estranged husband. Alice was reportedly so jealous of Camille that she demanded that Monet destroy all photos, letters, and mementos of her. Only one photograph is known to have survived, an 1871 portrait that was kept in a private collection. 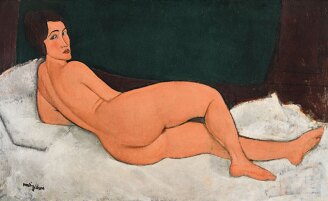 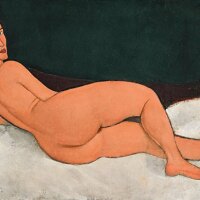 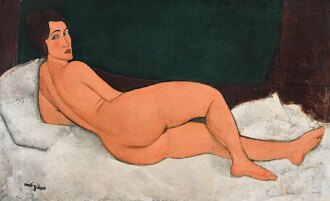 17. Monet and Hoschedé lived with their combined 8 children.

Monet had two children from his relationship with Camille, Jean and Michel. Hoschedé had six of her own children with her estranged husband: Blanche, Germaine, Suzanne, Marthe, Jean-Pierre, and Jacques. Blanche, herself a painter and a particular favorite of her stepfather, later married her stepbrother Jean.

18. His own harshest critic, Monet destroyed as many as 500 of his own paintings.

In 1908, a show of his work in Paris had to be postponed after he took a knife to at least 15 of his water lily canvases. This was not his first bout of destruction, nor would it be his last; after his cataract surgery, he disposed of or reworked many of the paintings that were created at the height of his vision loss. His friend and former French Prime Minister Georges Clémenceau told a journalist in 1927, “Monet would attack his canvases when he was angry. And his anger was born of a dissatisfaction with his work…Monet destroyed canvases in his quest for perfection.”

19. He rerouted a nearby river and imported exotic flowers to create his famous garden in Giverny.

In 1890, Monet bought a house in the village of Giverny and embarked on an ambitious project to create the gardens from which he would paint for the remainder of his life. An exacting landscaper, Monet wrote daily instructions to the six gardeners that were hired to realize his vision. In 1893, to the displeasure of his neighbors, Monet created a pond on his property by diverting a local river. He filled it with water lily cultivars from South America and Egypt.

20. At his funeral, the French statesman Georges Clémenceau declared: “No black for Monet!”

Monet died of lung disease on December 5, 1926 at the age of 86. According to his wishes, he had a small and simple funeral. When Clémenceau saw the black shroud intended for Monet’s casket, he rushed to replace it with a floral cloth, exclaiming “No, no black for Monet!” Indeed, Monet almost never used black in his paintings, preferring to combine darker colors to create a more dynamic appearance of shadow.

Monet’s son and heir Michel bequeathed the Giverny property to the Académie des Beaux-Arts. Over a period of ten years, the house and gardens were painstakingly restored to their former splendor and opened to the public in 1980. The grounds feature two gardens: the Clos Normand flower garden and the Japanese-inspired water garden. The site is open to visitors 7 months out of the year.