T his remarkable collection of letters and documents, assembled by a discerning connoisseur over a period of some twenty years, provides a myriad of insights into four centuries of history, from an important document signed by Ferdinand and Isabella on the aftermath of the Reconquista of Granada, to Lawrence of Arabia on the Arab Revolt.

It expresses the collector’s passion for the Napoleonic period: there are multiple letters by Napoleon himself at different stages of his life, but also members of his family, his Marshals, and his enemies – pre-eminently Nelson, who is represented by exceptional letters and other items including the sumptuous grant of the Dukedom of Bronte.

There are letters by key monarchs of European history, ranging from Mary, Queen of Scots, writing to give safe passage to a rebel Highland laird; to Frederick the Great, writing to his former tutor on his belief that he deserved no congratulations for a military victory that had been bought with so much blood; to Queen Victoria, writing to Tennyson about the death of John Brown. This is a sale that reveals the potency of the autograph letter to convey history in manuscript form.

A key strength of the collection is its assemblage of letters by key European monarchs from the 16th to the 20th century. These range from Ferdinand and Isabella, the joint monarchs who established the kingdom of Spain, to Nicholas II, the last Tsar of Russia, and include some of the most fascinating figures in European history such as Elizabeth I, Louis XIV, and Frederick the Great.

The sale features a selection of signed and inscribed photographs of some of the greatest minds of the last two centuries, including a signed photograph of Charles Darwin by collaborator and father of art photography, Gustave Rejlander.

This magnificent album includes contributions from writers, artists, composers, politicians, royalty, veterans, explorers, and many others. It was assembled in the early 1920s to raise money for British veterans of the First World War, and was described at the time as “the world’s most notable collection of autographs”. A number of the contributors make moving reference to their gratitude to the generation that was sacrificed in the trenches – whether that be Lloyd George’s acknowledgement of the suffering of the war, William Orpen’s harrowing drawing of a soldier facing death, or Holst’s transcription of the opening of ‘I vow to thee, my country’. 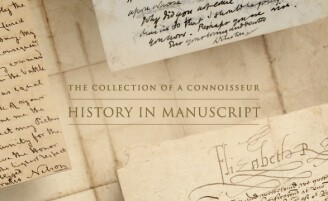