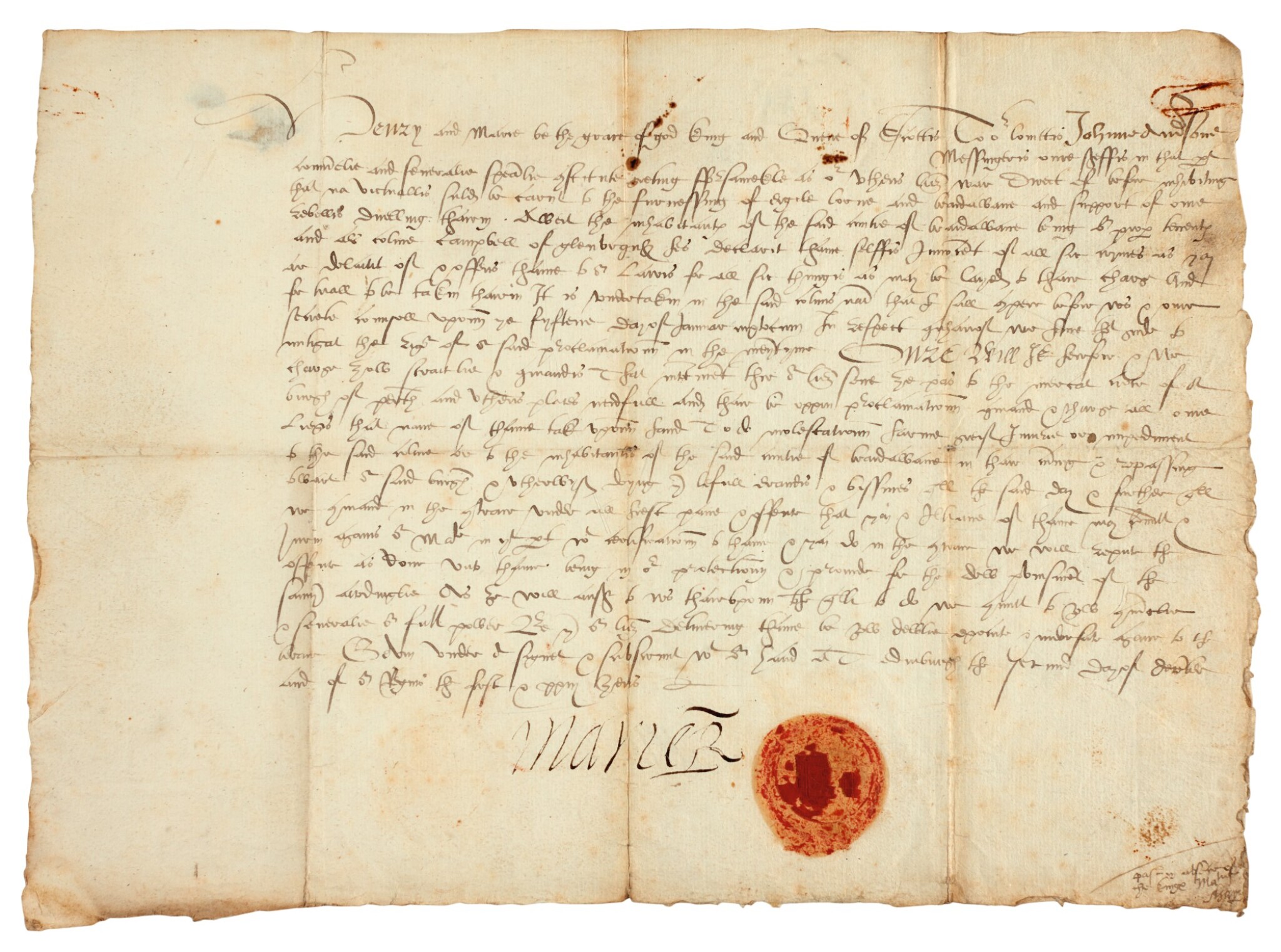 DOCUMENT SIGNED ("MARIE R"), IN THE JOINT NAMES OF "HENRY [IE. HENRY STEWART, EARL OF DARNLEY] AND MARIE BE THE GRACE OF GOD KING AND QUENE OF SCOTTIS"

countermanding a previous order that Argyll, Lorne, and Breadalbane should be starved of provisions, acknowledging that "coline campbell of glenurquy hed declarit thame selffis Innocent of all sic crymes" and has agreed to appear "before us & our secrete counsell" on the 15 January, so he and the inhabitants of Breadalbane should be allowed to travel unmolested, 1 page, oblong folio, remains of red wax seal impression, Edinburgh, 2 December 1565

A ROYAL ORDER RELATING TO "GREY COLIN" OF GLENORCHY JUST AFTER THE CHASE-ABOUT RAID, A REBELLION AGAINST MARY'S MARRIAGE TO LORD DARNLEY. Colin Campbell of Glenorchy (1499-1583) was caught up in this affair as a kinsman to Archibald Campbell, Earl of Argyll, the only leading rebel noble who had not fled to England after the failure of the raid in September. This document arranges for Grey Colin to travel to court on behalf of Clan Campbell to negotiate a settlement with the Queen and her husband. The Campbells were able to make peace with the crown early in 1566. Within months the murder of Mary's secretary Rizzio set the Queen against her husband and changed Scottish political allegiences again; Argyll was almost certainly complicit with Mary in Darnley's murder in February 1567.

"Grey Colin" was himself a laird who exerted formidable power from his base in Breadalbane. He commenced the long-running blood feud between the Campbells and the MacGregors, and in 1570 personally executed Gregor Roy, chief of Clan MacGregor. THIS ROYAL DOCUMENT PROVIDES A GLIMPSE OF THE SCOTTISH HIGHLANDS DURING A PERIOD OF EXCEPTIONAL TURBULENCE.

Rust marks from paper clip, some minor soiling and spotting