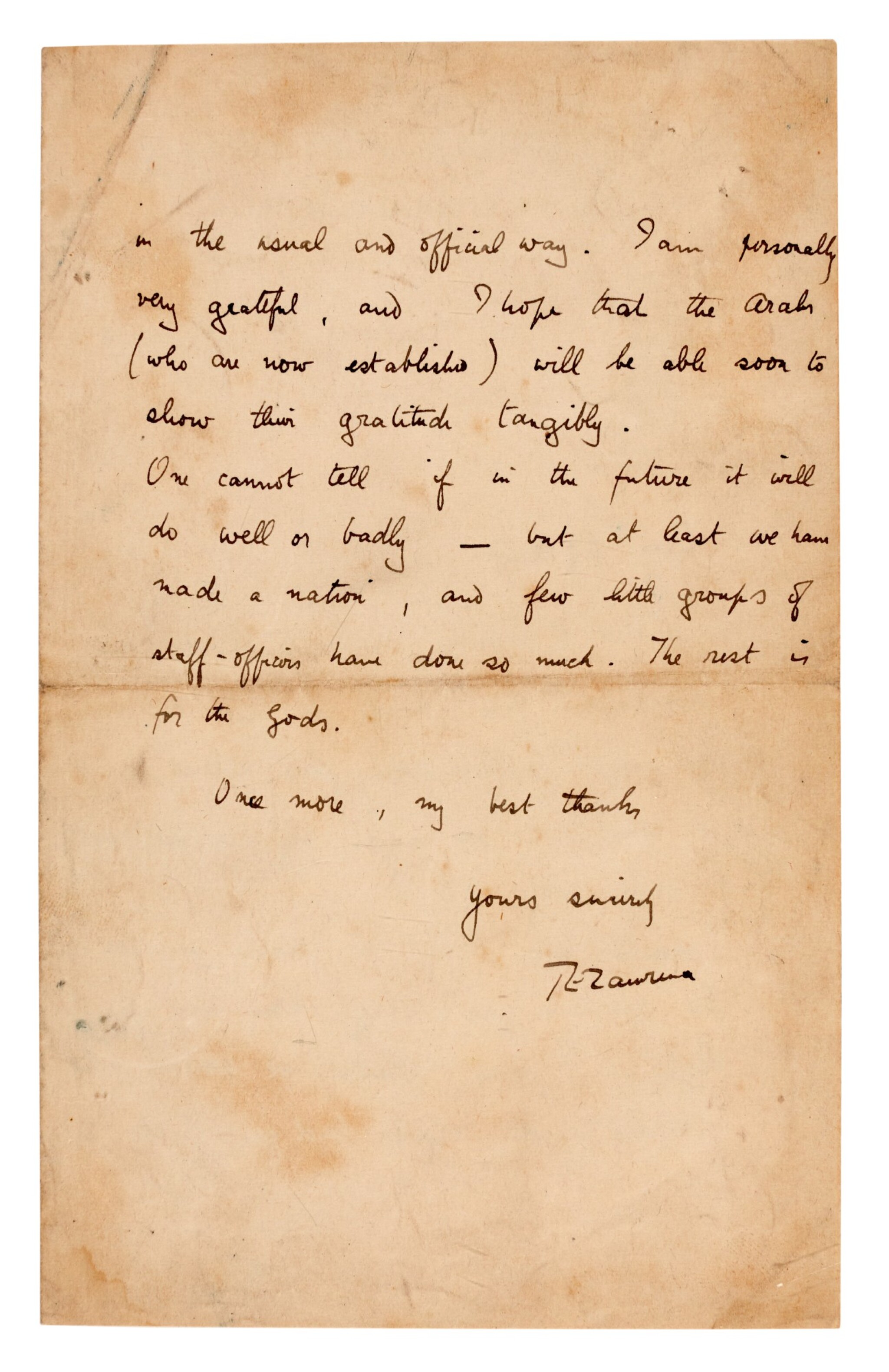 discussing the future of the Arab Revolt two weeks after the Capture of Damascus ("...We reached Damascus on September 30, and circumstances there made it best for me to come away. General Allenby has allowed me to go home, so here ends my connection with the Arab revolt..."), thanking him ("...for all that you and your staff have done for the Hejaz: I doubt whether we would have succeeded in our object had you treated us in the usual and official way..."), and expressing his personal gratitude ("...I am personally very grateful, and I hope that the Arabs (who are now established) will be able soon to show this gratitude tangibly..."), 2 pages, 8vo, headed stationery of The Grand Continental Hotel & D'angleterre Cairo, 14 October 1918

"...One cannot tell if in the future it will do well or badly - but at least we have made a nation, and few little groups of staff officials have done so much. The rest is for the gods..."

AN EXCEPTIONAL LETTER BY T.E. LAWRENCE WITH SOME OF HIS EARLIEST REFLECTIONS ON HIS INVOLVEMENT IN THE ARAB REVOLT, WRITTEN JUST TWO WEEKS AFTER THE FALL OF DAMASCUS AND THE DAY BEFORE HIS DEPARTURE FROM THE MIDDLE EAST. The fall of Damascus was the culmination of the Arab Revolt, marking the end of Ottoman power in the region, and on 4 October 1918 Allenby and Feisal, the British and Arab military leaders, met for the first time. Lawrence was suffering from severe fatigue, unsurprisingly given he had been in the field for two years, and his presence in the region was no longer crucial, so Allenby ordered him home with the rank of full Colonel. He stayed in Cairo before sailing from Port Said on 15 October, and the role of Littleton, "a major of the busiest", during these days is recalled in Seven Pillars of Wisdom: "He never failed us. As soon as he heard who and where I was, and what was not happening in the Inland Water Transport, the difficulty was over....Lyttleton saw my weariness and let me go at once to the hotel. Long ago it had seemed poor, but now was become splendid; and, after conquering its first hostile impression of me and my dress, it produced the hot baths and the cold drinks (six of them) and the dinner and bed of my dreams."