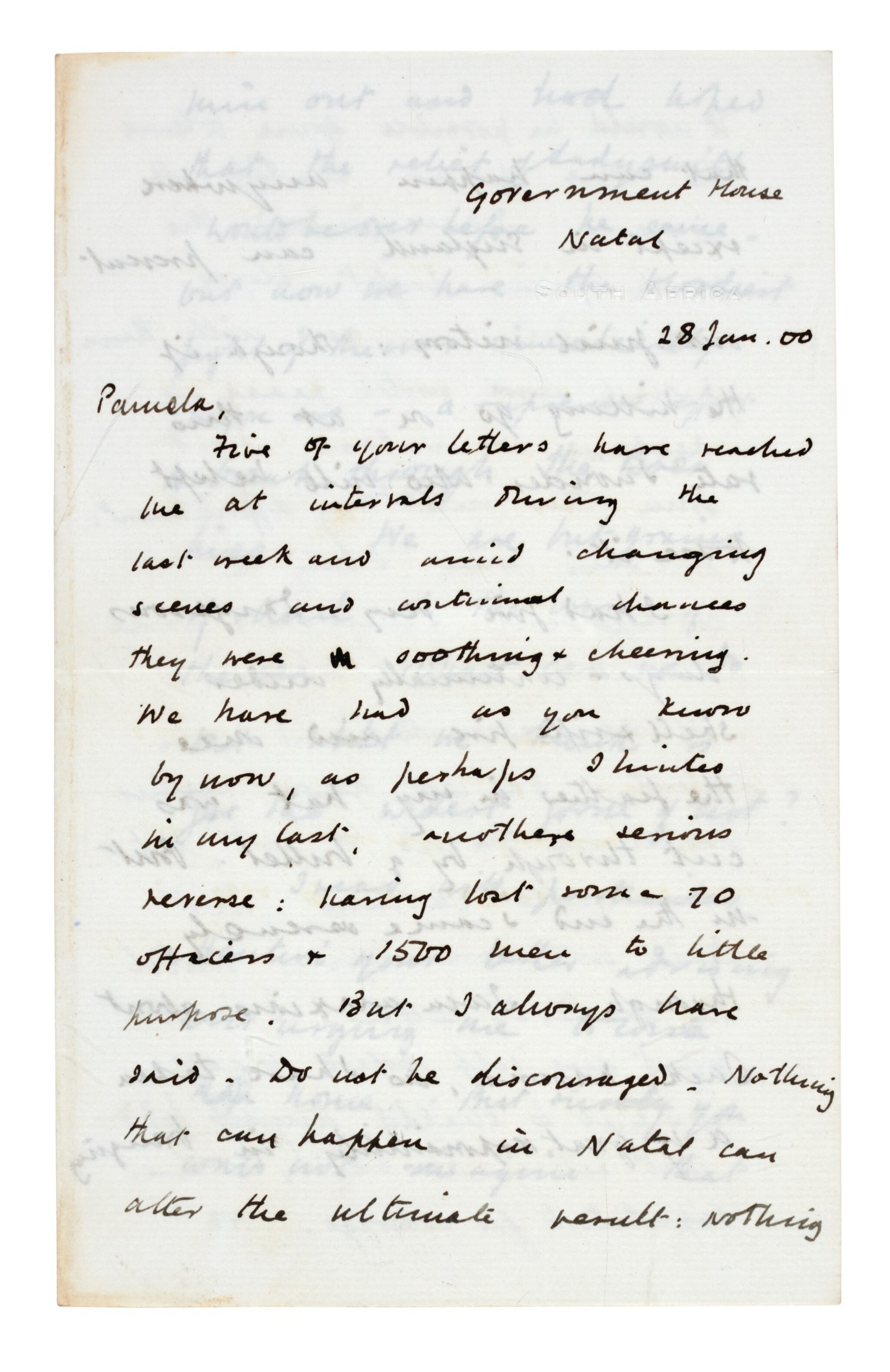 A REMARKABLE, EBULLIENT LETTER WRITTEN DURING THE BOER WAR AFTER THE BRITISH DEFEAT AT SPION KOP ("...We have had ... another serious reverse: having lost some 70 officers & 1500 men to little purpose..."), assuring her that this has not dented his confidence in ultimate British victory, admitting the personal danger he has faced ("...I had five very dangerous days - continually under shell & rifle fire and once the feather in my hat was cut through with a bullet. But in the end I came serenely through..."), explaining his decision to join the South African Light Horse, writing of his worry about his brother Jack, and of his mother's arrival in a hospital ship ("...The Marie will take 200 shattered creatures to be nursed into life again..."), although lamenting that Plowden did not accompany her, 8 pages, 8vo, Government House, Natal, 28 January 1900, autograph envelope

"...I am sure I am doing what is right from the largest point of view and am careless what may result - but I have a good belief that I am to be of some use and therefore to be spared..."

A letter by Churchill to his first love that reveals his supreme self-confidence, coolness under fire, and appetite for danger. In the previous three months he had been taken prisoner, escaped, and taken a military commission in the South African Light Horse - whilst remaining a war correspondent (the normal rules rarely applied to Churchill). Just five days before writing this letter Churchill had taken part in a failed British attack on Boer forces that had tried to break the Siege of Ladysmith, where "the scenes ... were among the strangest and most terrible I have ever witnessed". Despite, this, he assures her, "I am really enjoying myself immensely". Churchill remained in South Africa until the tide of war had turned in favour of the British, much as he had foreseen. By June of 1900, however, Churchill's thoughts were of Britain; as he put it in a letter to his mother, "Politics, Pamela, finances and books all need my attention." He proposed marriage to Pamela Plowden on his return. She turned him down, but the two were to remain lifelong friends.

Tear to final leaf with loss of one or two letters