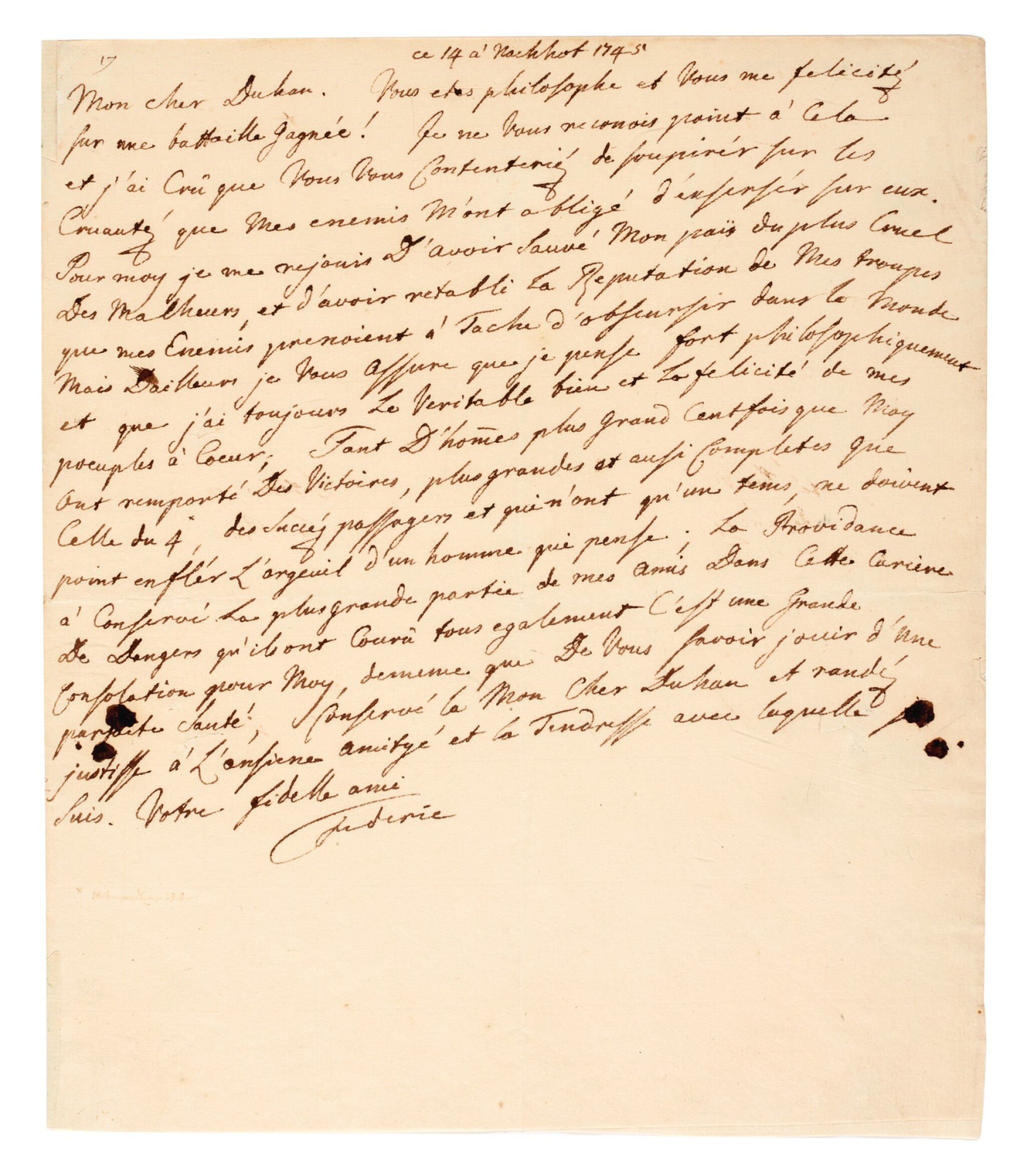 AUTOGRAPH LETTER SIGNED ("FEDERIC"), TO HIS FORMER TUTOR JACQUES DUHAN DE JANDUN, EXPRESSING HIS COMMITMENT AS AN ENLIGHTENED RULER DEDICATED TO THE BEST INTERESTS OF HIS PEOPLE

in French, responding to Duhan's congratulations on his victory over the Austrians at the Battle of Hohenfriedberg (on 4 June 1745), but saying he scarcely recognizes his old tutor in his letter, and that as a philosopher he should rather be commiserating with him over the cruelties that his enemies had forced upon him; he concedes he is happy to have saved his countrymen from the most cruel misfortunes and re-established the prestige of his troops, but assures him that he approaches all this as a philosopher, having always the best interests of his people at heart, observing that men a hundredfold greater than him have won more complete victories, and that such transitory success should not inflame the personal vanity of any man capable of considering himself a thinker, 1 page, 4to (22 x 19cm), integral blank, posthorn watermark (Heawood 2748), Náchod, 14 [June] 1745

This letter is a clear exposition of Frederick's desire to be a Philosopher King as defined by Plato, thereby realizing D'Alembert's encomium on his accession: "philosophers and the men of letters in every land have long looked upon you, Sire, as their leader and model". He corresponded with key figures of the Enlightenment, including Voltaire, Algarotti and Rousseau (whom he gave shelter, even though he profoundly disagreed with him). The Battle of Hohenfriedberg in the War of Austrian Succession was one of Frederick's most admired military achievements, which lead to him being dubbed "the Great", yet his first concern here is to assure his old tutor that always he "thinks very philosophically" and has the best interests and happiness of his people at heart, regarding military success as merely transitory. Jacques Duhan de Jandun (1685-1746) had been Frederick's tutor for twelve years, instilling in him a love of the Greek and Latin Classics, rather than the religious observance his father had planned for him. On his accession in 1740, Frederick appointed Duhan director of the Liegnitz Academy in Silesia and attended him at his deathbed in 1746.

a few ink-blots, careful repairs to splitting at hinge