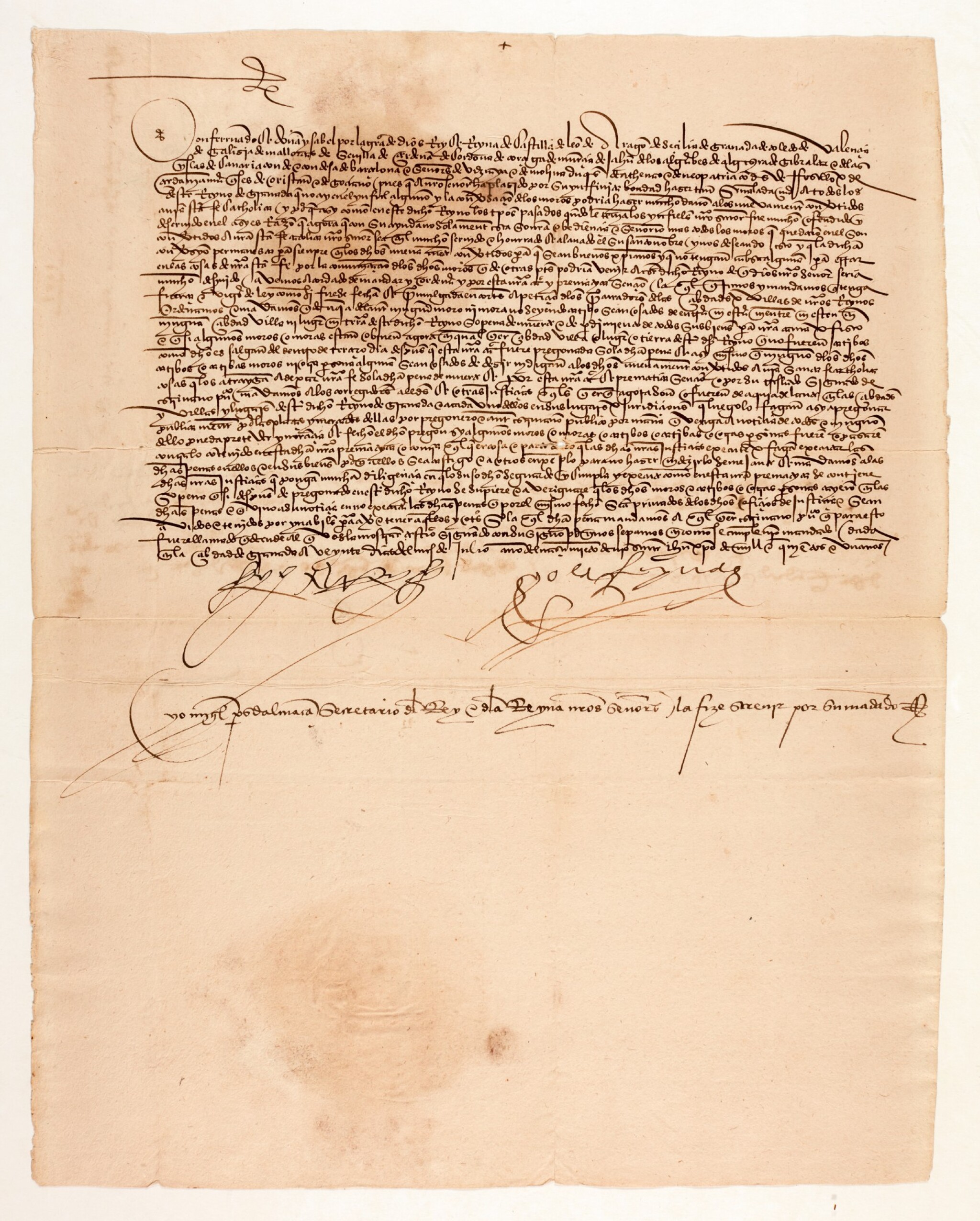 FERDINAND V, KING OF SPAIN AND ISABELLA, QUEEN OF SPAIN

FINE AND IMPORTANT DOCUMENT SIGNED BY LOS REYES CATÓLICOS ("YO EL REY" AND "YO LA REYNA"), ORDERING THE EXPULSION OF MUSLIMS FROM THE KINGDOM OF GRANADA,

in Spanish, written in a scribal hand in dark brown ink, decreeing that all unconverted Muslims must leave the Kingdom of Granada within three days of the proclamation, and that none shall henceforth be permitted to re-enter on pain of death and confiscation of their goods, noting that their presence threatens those Moors that have converted to Catholicism and that good Christians had been abused under the former Muslim rulers, 1 page, large folio (39.5 x 31cm), "Letter P" watermark (somewhat similar to Briquet nos 8788 & 8789), countersigned by Miguel Perez de Almazen, the royal secretary, fine large papered seal bearing the royal arms on verso, 5-line contemporary endorsement and signatures to verso, Granada, 20 July 1501

[translation: "We order and command that henceforth no Moorish man or woman, unless they are prisoners, shall dare to enter or be in any city, town, village or territry of the aforesaid Kingdom [of Granada] on pain of death and of the loss of all his or her goods for our Treasury"].

THIS LARGE AND ATTRACTIVE DOCUMENT SIGNALS THE EXPULSION OF MOORS FROM SPAIN, FOLLOWING THE "RECONQUISTA" OF 1492. THIS MOMENT MARKS A WATERSHED IN EUROPEAN HISTORY

A series of increasingly severe decrees began to regulate the life of the Moors following the fall of Granada in 1492, the last Moorish stronghold in Spain. Under the terms of the surrender, the Moors were initially allowed to continue to practice their religion. However, once Granada had been made a see of a Catholic archbishopric, a programme of registration and forced conversion of Moors was undertaken, first by Archbishop de Talavera, and then more vigorously by Cardinal Cisneros. There was a great burning of Arabic books and manuscripts, which, together with other stringent measures, provoked mass protests, culminating in an uprising in 1499.

The present Pragmatic of 20 July 1501, following the registration and the forced conversions in Granada, prohibited all Moorish Castilians from elsewhere in the Kingdom of Castile, from entering the Kingdom of Granada and intermingling with the converts. Although it did not deal directly with the matter of conversion, this decree in Granada, together with its subsequent confirmation on 12 February 1502 in Seville, effectively ordered the expulsion of Muslims from Spain. The text of the final 1502 proclamation is published in Novísima recopilación de las leyes en España (volume V (1805), libro 2, pp.311-312), but not the present original Pragmatic of 1501.

Slight wear at folds, including a small hole affecting two words, slight browning from the papered seal, otherwise in very attractive condition for its age.