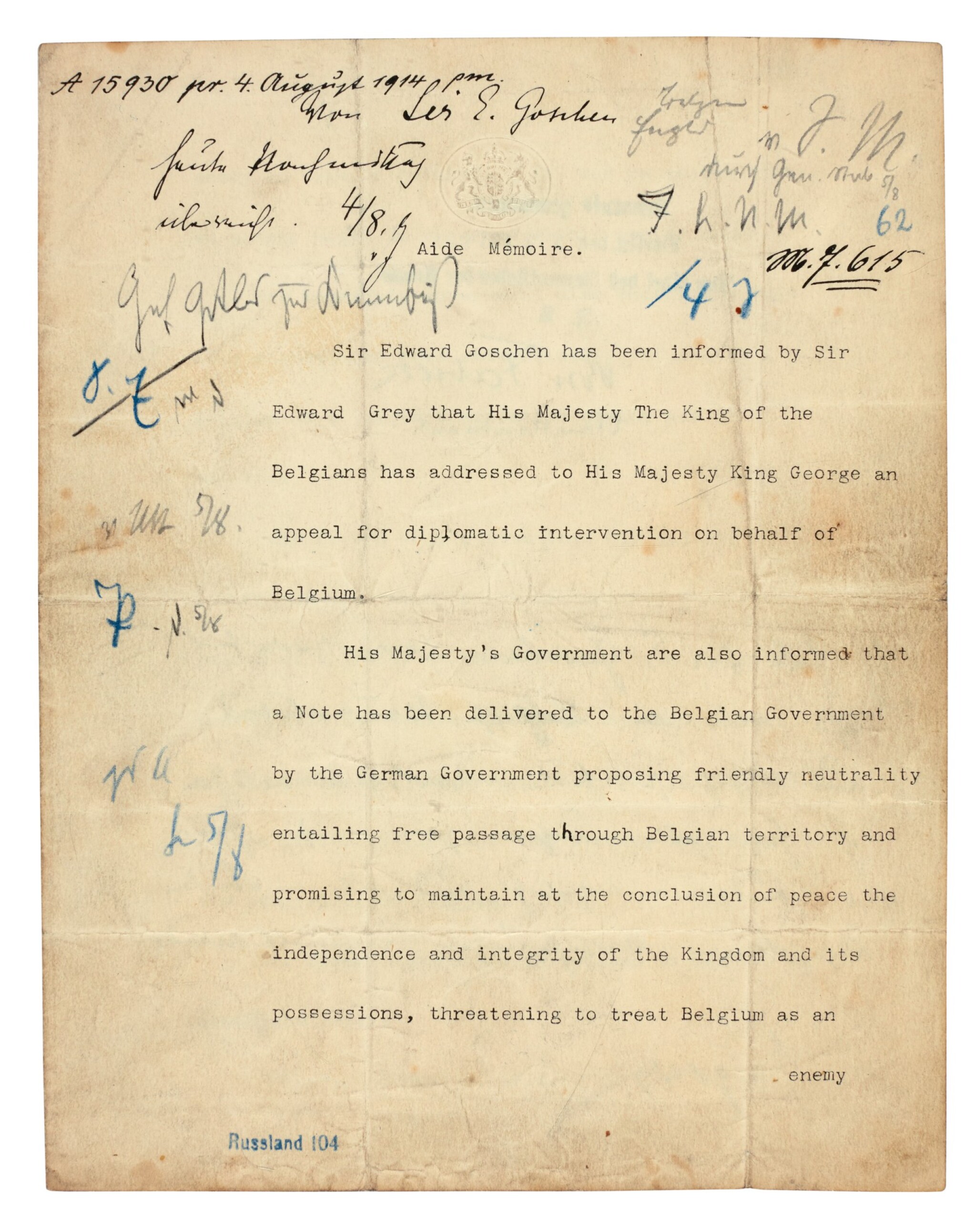 THE FINAL WARNING ISSUED BY THE BRITISH GOVERNMENT TO GERMANY A FEW HOURS BEFORE TWO COUNTRIES WENT TO WAR IN 1914, stating that the German demand for free passage through Belgian territory has been denied by the Belgian Government as a "flagrant violation of the Law of Nations", and confirming the British Government's support for Belgium ("...His Majesty's Government are bound to protest against this violation of a Treaty to which Germany is a party in common with themselves and that they must request made upon Belgium will not be proceeded with and that Germany will respect the neutrality of Belgium..."), 2 pages, 4to (c.24.5 x 19cm), on rectos only, embossed stationery of the British Embassy, Berlin, 4 August 1914;

extensively annotated by Gottlieb von Jagow in black ink, recording receipt of the document that afternoon ("Von Sir E. Goschen heute Nachmittag überreicht 4/8. J"), and (on the blank verso) his answer to Goschen that Germany had violated Belgian neutrality out of necessity, explaining all their reasons and repeating all the assurances that had been given in London ("...Ich habe Sir E. Goschen geantwortet, daß wir die Belgische Neutralität aus Nothwehr hätten verletzen müssen, ich habe alle unsere zweigenden Gründe auseinandergesetzt und alle in London abgegebenen Versicherungen nochmals wiederholt..."), also bearing further notes and docketing mainly in pencil, one possibly by the Kaiser himself ("Gut Gutes zur Kenntniß") and another indicating that the memorandum had been shown to him by the German General Staff ("v. S. M. durch Gen.Stab 5/8"), with an archival stamp at the foot of the first page ("Russland 104")

[together with]: three press cuttings and two related letters concerning the discovery of this document by Neville H. Bullock, a British Marine, in the ruins of the Reich Chancellery, Berlin, 1946

A KEY DOCUMENT IN THE COMPLEX SERIES OF EVENTS THAT LED TO THE OUTBREAK OF WORLD WAR ONE. As the crisis that began in the Balkans spread through Europe, Germany found herself facing enemies east and west and decided to execute the Schlieffen Plan, which aimed at a quick defeat of France before Russia could mobilise its massive reserves. French defences were to be avoided by marching through neutral Belgium, and on 3 August 1914 Germany demanded that her military forces be given free passage through Belgium. It was this disregard for Belgium's long-standing neutrality, which had been established in the 1839 Treaty of London, that finally overcame British reluctance to become involved in a rapidly escalating European conflict. It fell to the British Ambassador, Sir Edward Goschen (1847-1924) to present the British ultimatum. He handed the current document to von Jagow, the Secretary of State at the Imperial Foreign Office, when they met on the afternoon of 4 August. As Jagow's note confirms, he refused to provide any assurance over Belgian neutrality and at midnight, after a series of further fruitless meetings, the British deadline passed: Britain and Germany were at war. When Goschen had his final meeting with the German Chancellor, Theobald von Bethmann-Hollweg, after the midnight deadline, the Chancellor famously expressed his anger and disgust that Britain would go to war over "a scrap of paper", as he described the 1839 treaty.