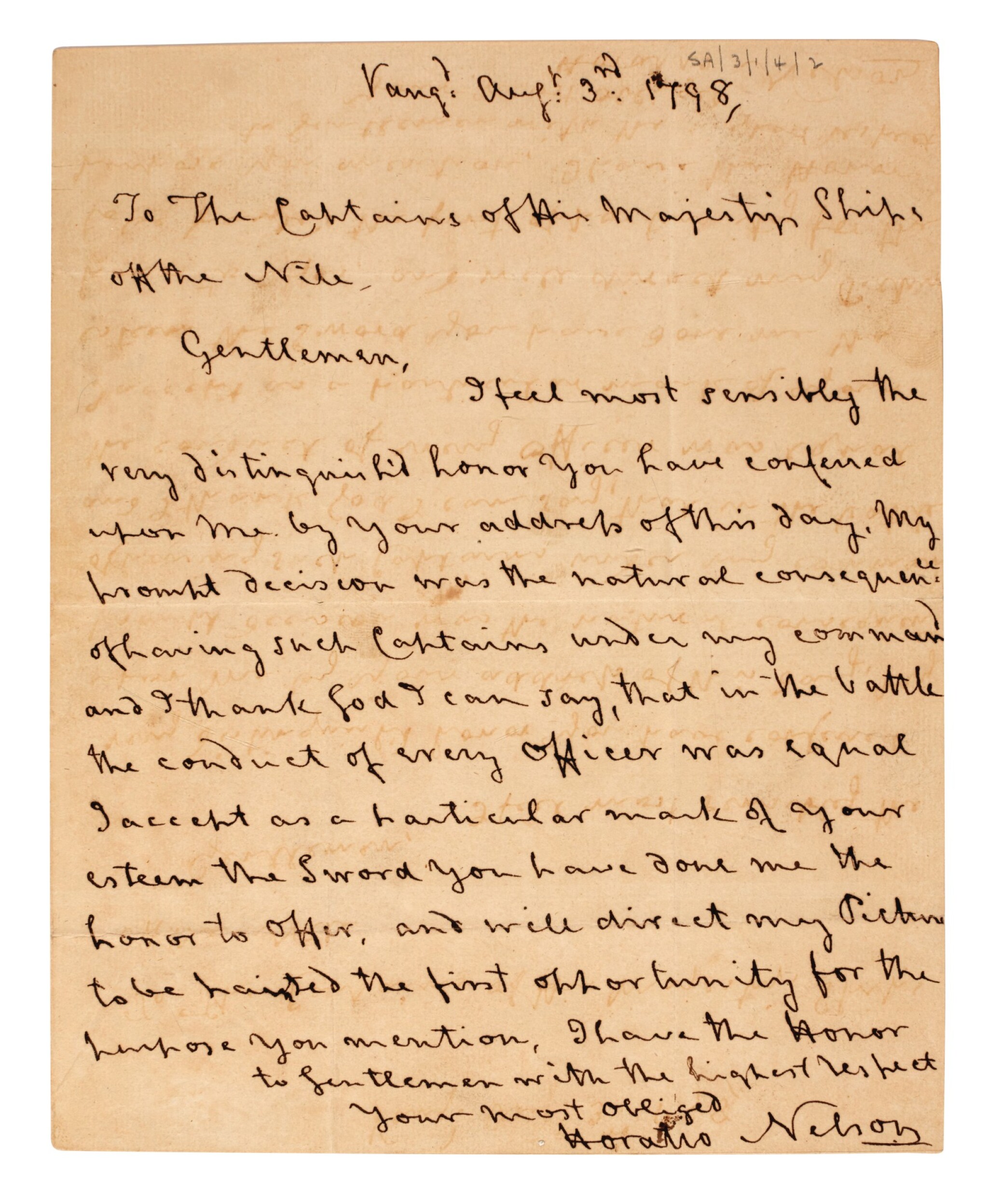 AUTOGRAPH LETTER SIGNED ("HORATIO NELSON"), TO "THE CAPTAINS OF HIS MAJESTY'S SHIPS OFF THE NILE",

PRAISING HIS CAPTAINS TWO DAYS AFTER HIS VICTORY AT THE NILE ("...My prompt decision was the natural consequence of having such Captains under my command and I thank God I can say, that in the battle the conduct of every Officer was equal..."), accepting "as a particular mark of your esteem" the promised gift of a ceremonial sword, and agreeing to have his portrait painted "for the purpose you mention", 1 page, 4to, integral blank, docketed, HMS Vanguard, 3 August 1798

A letter expressing in powerful and heart-felt terms the remarkable bond that Nelson developed with the "band of brothers" who served under him at the Nile. It was Nelson's complete trust in the bravery and consummate seamanship of his officers and men that made possible his devastating victory over the French fleet at the mouth of the Nile. As Admiral Howe, who in 1794 had gained victory at the Glorious First of June, remarked when he heard news of the battle: "the most remarkable feature of the transaction consists in the eminently distinguished conduct of each of the captains of his Squadron. Perhaps it has never before happened, that every captain had equal opportunity to distinguish himself in the same manner, or took equal advantage of it." (Quoted in Knight, The Pursuit of Victory (2005), p.296).

This letter is Nelson's response to the establishment of the Egyptian Club, an act that further strengthened the bond between the captains at the Nile. Earlier that day the Captains of the fleet met on board HMS Orion - captained by Sir James Saumarez, from whose papers this letter derives - and agreed to commemorate their great victory by inaugurating a club for the victors, commissioning ceremonial swords for the members, making a gift of one such sword to Nelson, and inviting their commander to commission a portrait of himself for the club. Nelson's portrait was never completed and his sword has been lost since 1900, but other surviving swords of the "band of brothers" are amongst the most highly prized pieces of Nelsoniana. The Egyptian Club and its associated artefacts reveal the rapidity with which the battle developed an aura appropriate to a legendary victory.

some off-setting of ink, slight browning