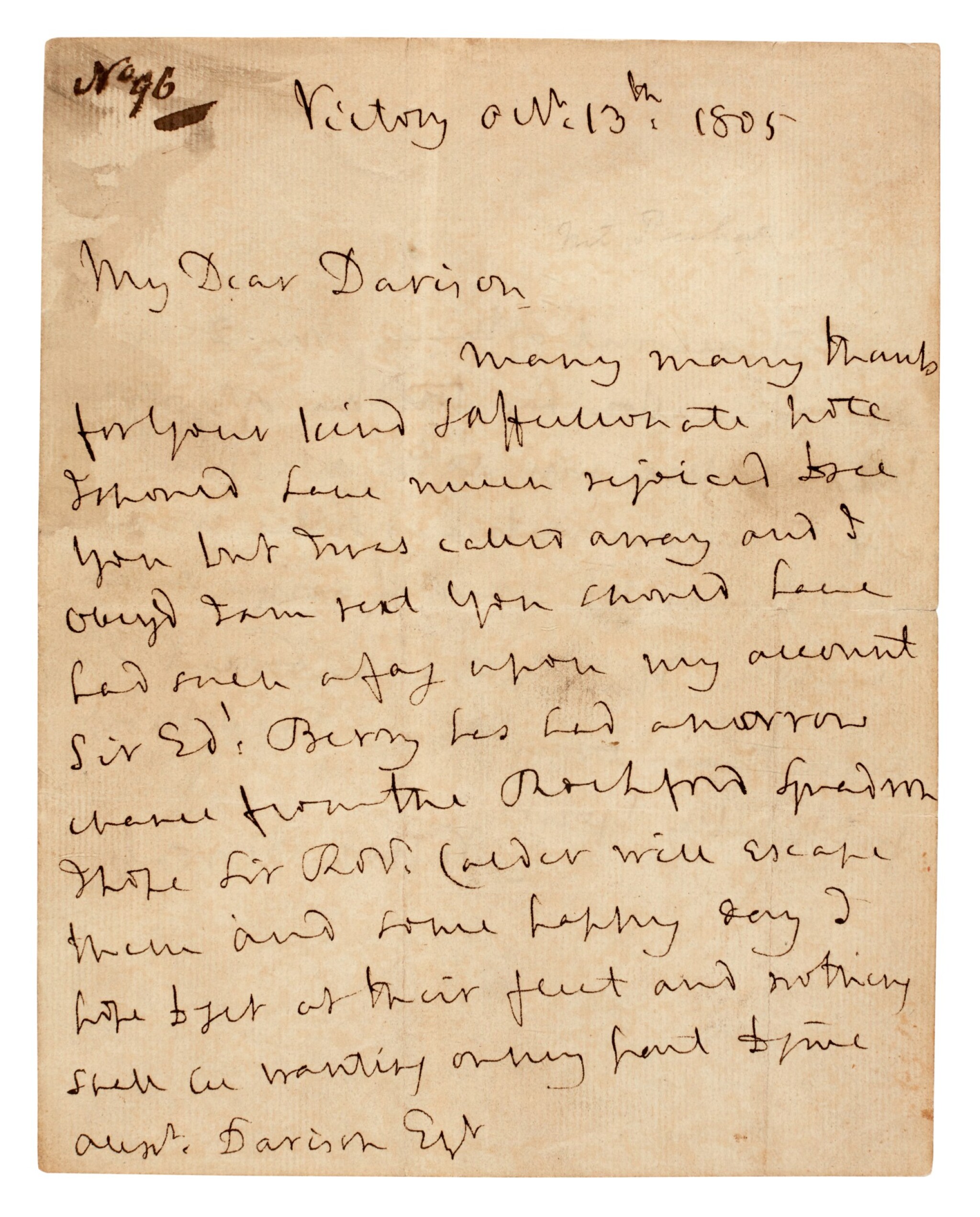 WRITTEN DAYS BEFORE THE BATTLE OF TRAFALGAR ("...some happy day I hope to get at their fleet and nothing shall be wanting on my part to give a good account of them..."), thanking him for his "kind & affectionate note", expressing regret that they did not meet during his final shore leave ("...I should have much rejoiced to see you but I was called away and I obeyd..."), commenting on the build-up to the coming battle ("...Sir Ed: Berry has had a narrow chance from the Rochford Squadron I hope Sir Robt. Calder will escape them..."), and thanking him for his continued help with financial affairs, 2 pages, 4to, detached blank, later secretarial docketing ("No. 96"), HMS Victory, 13 October 1805, with autograph address wrapper, complete black wax seal impression

NELSON'S FINAL LETTER TO HIS CLOSE FRIEND ALEXANDER DAVISON. Nelson had returned to the fleet blockading Cadiz on 29 September, and was waiting for the combined Franco-Spanish fleet to leave harbour, which they were to do when the wind turned on 18 October. He refers in this letter to the brilliant but narrow escape by his former flag-captain at the Nile, Sir Edward Berry (1768-1831), who had been pursued and raked by fire for seventy miles by the Rochefort Squadron when in command of the Agamemnon. Rear-Admiral Sir Robert Calder (1745-1818) was about to face the same enemy squadron as he returned to Britain to face a court martial for his indecisiveness the previous July, when Calder had failed to engage satisfactorily Villeneuve's fleet off Finisterre.

Nelson also takes this final opportunity to thank Davison for his kindness to Emma Hamilton and care for his finances. His gratitude was well warranted: Davison was to provide invaluable help and support to Emma, and indeed to Nelson's other surviving family, in the months and years that were to follow.

patches of light dust-staining, nicks at edges of folds