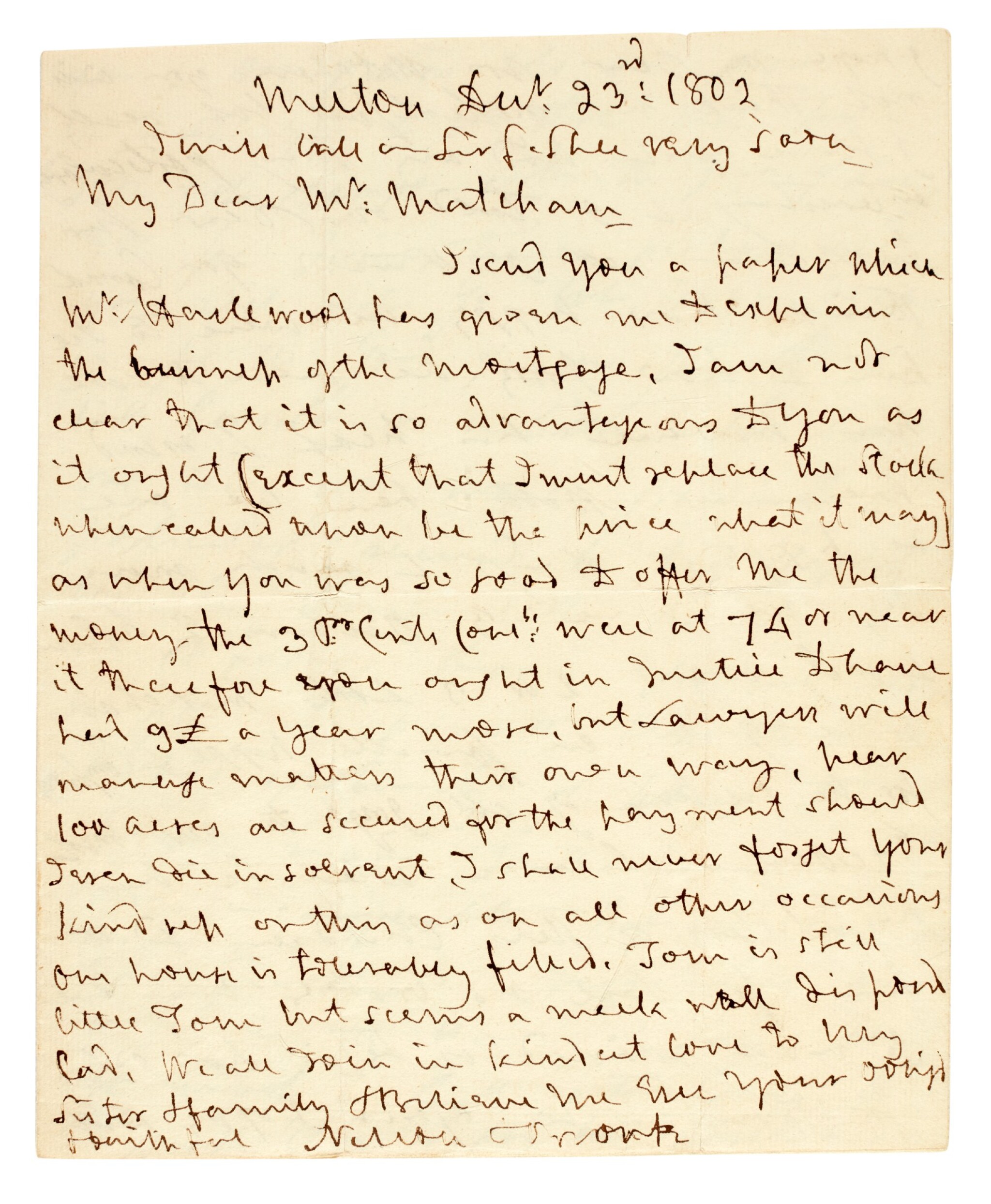 GIVING A VIVID IMPRESSION OF THEIR LIFE AT MERTON PLACE DURING THE PEACE OF AMIENS, AND DISCUSSING THE ROYAL FAMILY, Nelson beginning the letter by updating Matcham on negotiations for a mortgage to cover a loan, summarising an enclosed note from his lawyer but assuring him that "I shall never forget your kindness", then touching on their domestic affairs and the extended family in residence at Merton ("...our house is tolerably filled, Tom [Bolton] is still little Tom but seems a meek well disposed lad..."); the letter then continued in the hand of Emma Hamilton, who writes in her characteristic adulatory manner of her love for Nelson, her delight at his recent reception at court with Sir William Hamilton ("...our Hero was most graciously & particularly received by her Majesty when he went with sir wm to the Drawing Room sir Wm who is often in private with the R[oyal]. F[amily]. so had the opertunity of letting them Know many truths concerning our incomparable Nelson dont you think he speaks like an angel in the House of Lords..."), and picturing in blissful terms their life at Merton ("...we are as happy as Kings & much more so, we have 3 Boltons 2 Nelsons & onely want 2 or 3 Little Matchams to be quite en famille happy & comfortable for the greatest of all joys to our most Excellent Nelson is when he has his sisters or their Children with him for sure no brother was ever so much attached as he is..."); altogether 4 pages, 4to, Merton, 23 December 1802

[with:] William Haslewood, Nelson's lawyer, autograph memorandum, detailing the terms upon which Nelson's loan from George Matcham is secured, 2 pages, integral autograph address leaf by Nelson with franking signature, endorsed by Emma Hamilton ("he has bought & got the Estate"), postal marks, trace of wafer seal, 23 December 1802

"...I love him adore him his virtues his Heart mind soul Courage all merit to be adored & every thing that Concerns his Honner glory & happiness..." (Emma on Nelson)

The immediate reason for this letter was to outline arrangements by which Nelson would secure a loan from his sister's husband George Matcham - who had made a fortune in India as a young man - that would allow Nelson to expand his estate by purchasing a farm adjoining Merton Place. Both Nelson and Emma take the opportunity to present a picture of happy and vibrant family life at Merton at Christmas time, with Lord Nelson's brother Dr William Nelson, his sister Susannah Bolton, and both of their families in residence. They talk in particular of the children: Tom Bolton (1786-1835), who would eventually to succeed as 2nd Earl Nelson, and Charlotte Nelson (1787-1873), who came to inherit the Bronte estate in Sicily.

This letter is also notable for Emma's triumphant account of her men's recent attendances at court. Their unorthodox personal life had complicated both Nelson's and Hamilton's positions in society: the King had snubbed Nelson at a levee at the palace in June 1802, and Sir William had also found himself shunned by the monarch and his consort. Emma evidently saw their recent reception at court as a sign that their shared life together was gradually finding acceptance in high society.

Matcham, The Nelsons of Burnham Thorpe, pp.203-5, in which extracts from this letter are printed.