T he writing of Sylvia Plath has inspired generations of readers. Her poetic voice, especially in the posthumously published Ariel poems, has a power and intensity that is utterly unique, whilst The Bell Jar is both an intimate narrative of depression and a dark feminist satire that still resonates today. Her life, her marriage to Ted Hughes, and her death, have also commanded more attention and controversy than almost any other modern writer. This is in part because she crafted so much of her life into her writing, but also because of the tragedy of her life, curtailed by suicide at the age of thirty when she was at the height of her creative powers.

This sale of letters and personal items, which comes directly from the family, provides a unique portrait of Sylvia Plath as a writer, a lover, and a wife. At the heart of the collection are the letters that Plath wrote to Ted Hughes in October 1956. These are the only surviving letters from Plath to Hughes, dating from a rare period of separation between their meeting in February 1956 and the collapse of their marriage in the summer of 1962. The couple had been married for just four months and these are passionate love letters, full of optimism and unabashed literary ambition, revealing the deep and close collaboration between the two young writers. They are also letters in which Plath does not hide her emotional vulnerability, and in which she makes clear to Hughes how much she has invested her happiness and identity in their relationship.

If the letters to Hughes reveal a moment in Plath’s life in high intensity, the rest of the sale provides a narrative of their life together, through her regular letters to her parents-in-law as well as family photographs and association items. Their marriage is commemorated by the wedding bands, second-hand gold rings hurriedly purchased in the days before their rushed marriage; their honeymoon by Hughes’s gift of an Egyptian turquoise hawk; their domestic life together by typed recipe cards. Plath’s letters to Hughes’s parents describe their life together in Cambridge, their two years in America, Hughes’s early and burgeoning success as a poet, and their return to England and new life with children. Plath’s own photo album provides a further narrative of this journey into domesticity, beginning with photos of the two young and fresh-faced poets beginning their life together, and ending with a smiling Plath and her two young children in a field of daffodils at their home in Devon in the spring of 1962, just before Hughes’s affair sent their lives spiralling out of control. 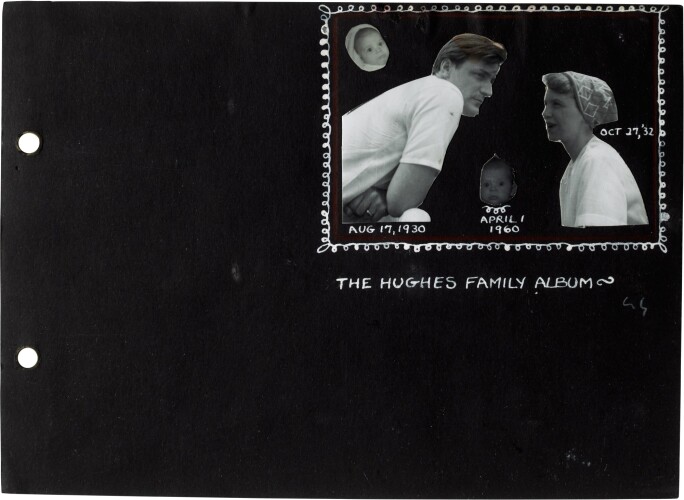 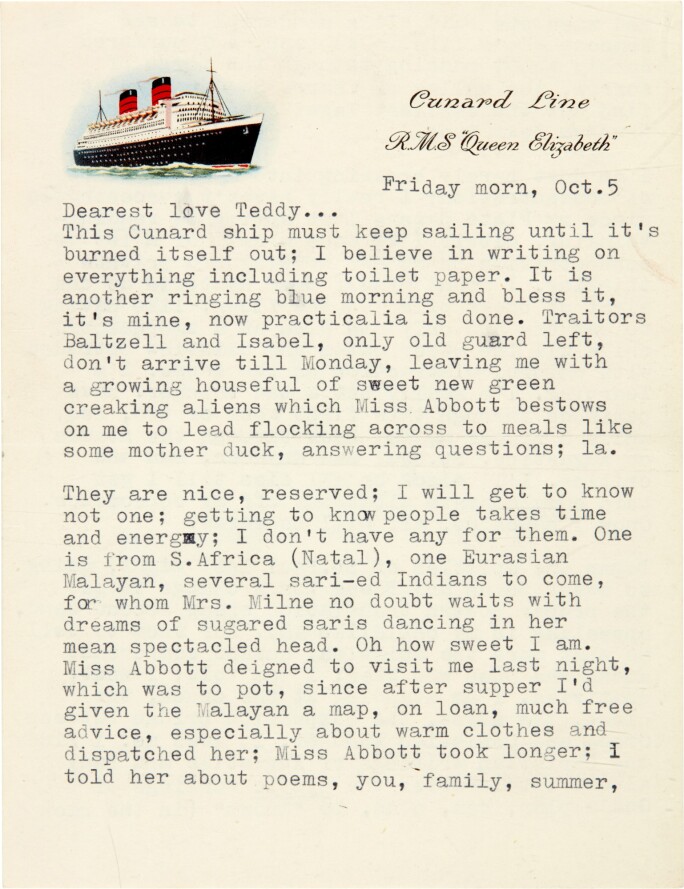 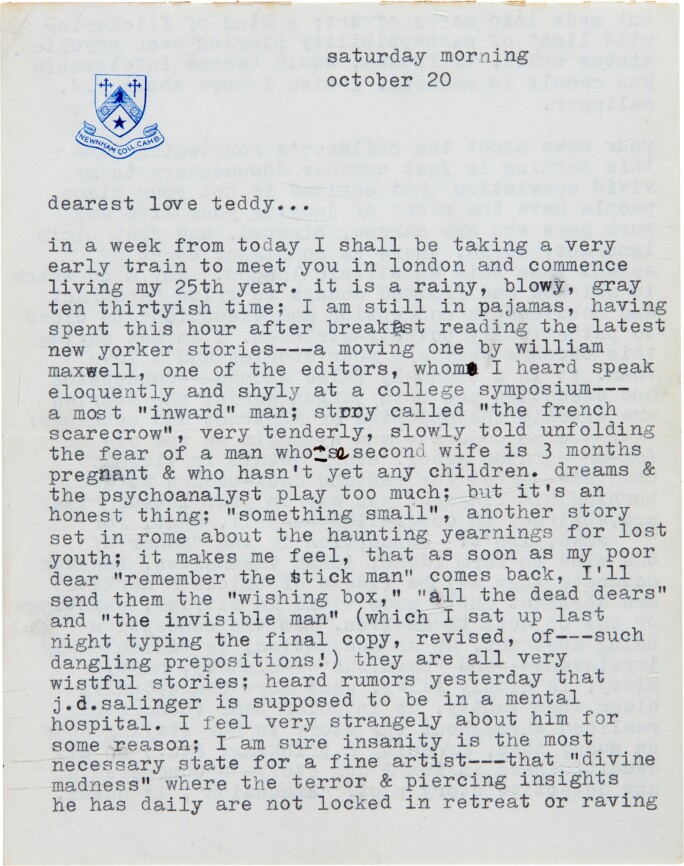 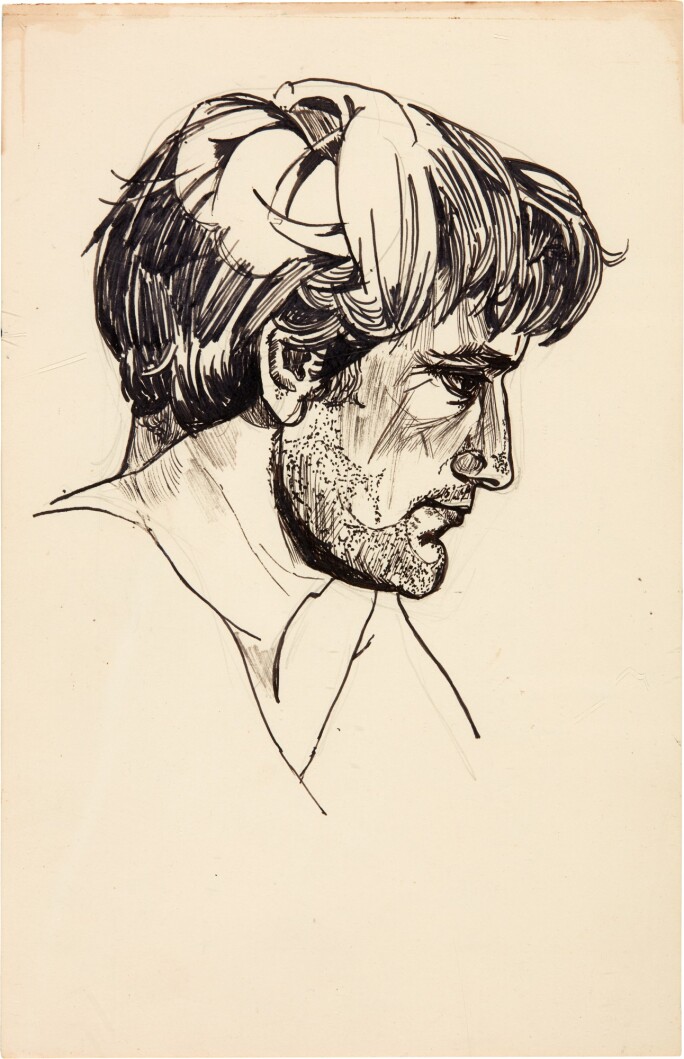 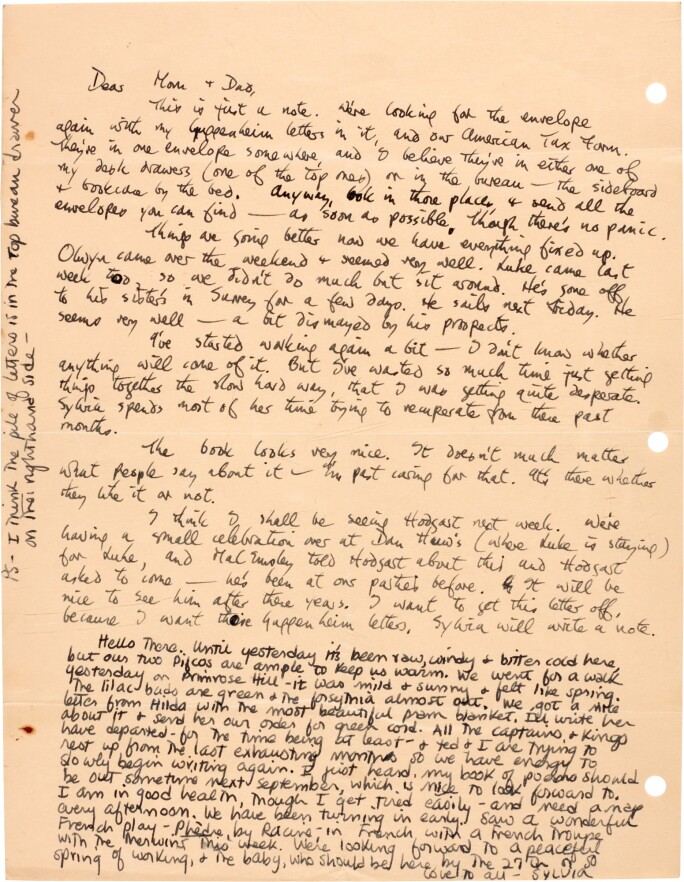 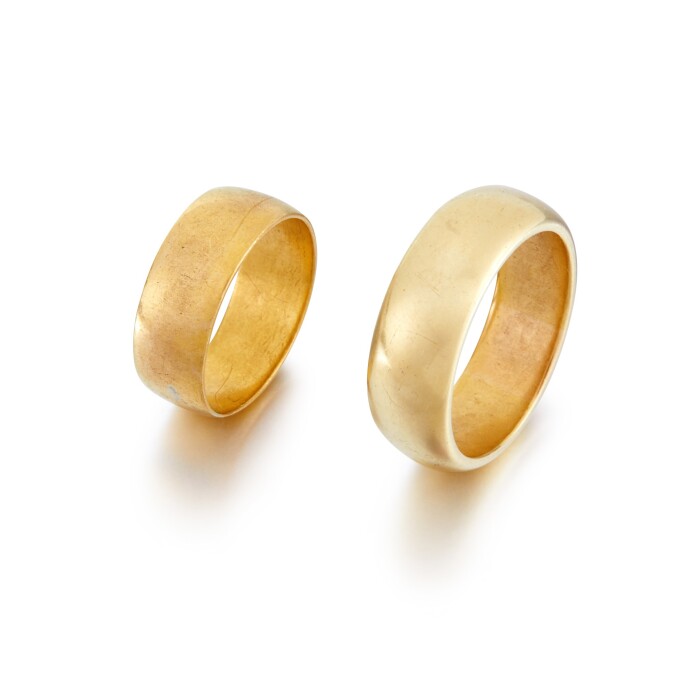 The Extraordinary Love of Sylvia Plath and Ted Hughes

Sylvia Plath’s love letters to Ted Hughes (lots 6-21) were all written at the beginning of her second year studying at Newnham College, one of the women’s colleges at Cambridge University. She had come to Cambridge in October 1955 to study English Literature as a Fulbright scholar, following her graduation from Smith College. Her literary horizons were much broader than the Cambridge student scene, but on 26 February 1956 she had bought a copy of a new student poetry journal, Saint Botolph’s Review, in which Ted Hughes’s poems first appeared in print. She was immediately struck by the energy of his poems and went that evening to the launch party, determined to meet the poet. The sexual chemistry was immediate and powerful – Hughes was left with prominent bite-marks on his cheek; they were soon lovers and by the time her second year began in October 1956 they had been married for just over three months. She writes in her letters to Ted Hughes of her difficulty settling back into Cambridge life. The beauty of the city and its surrounding countryside enchanted her, as did the university’s rich traditions, but sexism was deeply entrenched throughout Cambridge, including in the attitude of many academics. Women had only even been allowed to take a degree at Cambridge in 1948 and Newnham was one of just two women’s colleges in a sea of male-only institutions. She found the asceticism and hauteur that marked Cambridge life uncongenial, and she did not find the atmosphere at Newnham itself welcoming or supportive. Her letters to Ted Hughes were written when Sylvia Plath was living for her second year in Whitstead, a large house within Newnham college grounds with no central heating and only a very basic kitchen, which housed twelve foreign students. In these letters we see her world starkly divided between the cold and cerebral Cambridge life, and her intense life with Ted Hughes that brought warmth and love to her body and soul.

The current sale includes 16 letters written by Sylvia Plath to her parents in law, Edith and William Hughes (lots 23-37, 39-40, 42). William had fought in the trenches in World War One and in 1938 the couple had bought a newsagent shop in the industrial Yorkshire town of Mexborough. They were far from the British elite Plath had encountered in Cambridge (indeed Hughes had felt barely more at home at Cambridge than Plath), although Edith’s family, the Farrars, had a place in literary history (in the 17th century, Nicholas Farrar had published George Herbert’s The Temple and was one of the founders of Little Gidding). Sylvia Plath first met them in September 1956 when she visited their home with Ted Hughes on their return from their honeymoon. Their home, The Beacon, had panoramic views from the Pennines over the Yorkshire moors, and was sited just outside the hilltop village of Heptonstall. This was Brontë country, and Sylvia Plath loved it. Her letters to Edith and William are warm and friendly, although she never admits to depression and presents a relentlessly sunny account of her life with Ted Hughes. Edith also struck up a friendship with Plath’s own mother, Aurelia. Plath could be condescending about the modest life and unintellectual outlook of Edith and William Hughes, but her affection for them was deep: when she wrote in the summer of 1962 to tell them that Ted Hughes had left her, she assured them of her continued deep love. 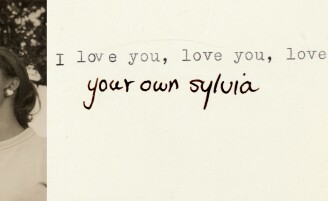 AUCTION
Your Own Sylvia: Sylvia Plath’s letters to Ted Hughes and other items, property of Frieda Hughes
9 July 2021 | 10:00 BST | London