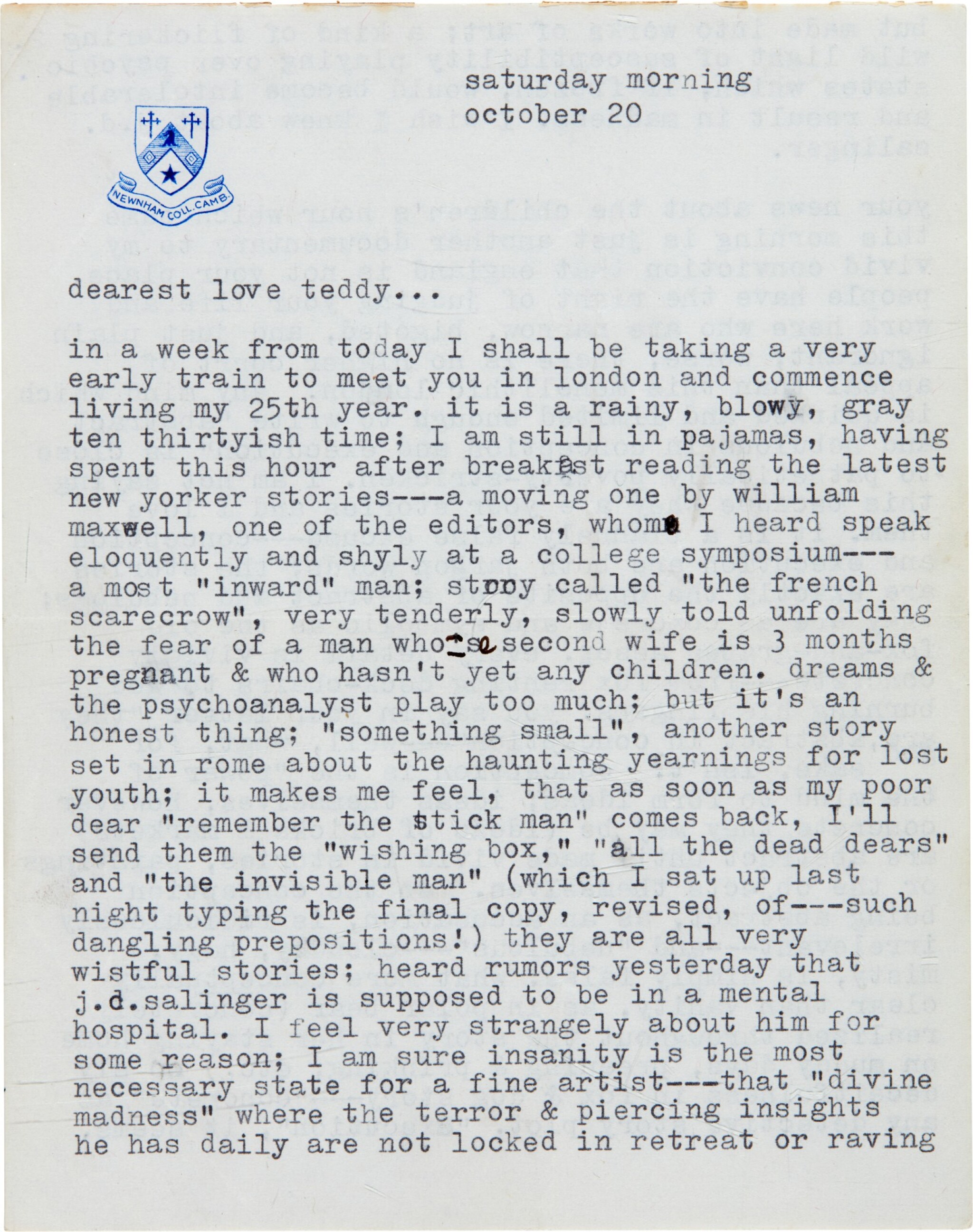 fulminating against the English literary scene following a rejection of Hughes's fables ("...people have the right of judging your life and work here who are narrow, bigoted, and just plain ignorant; worse, there is no higher court of appeal than this monolithic london..."), with her opinion of the latest New Yorker, rumours about the mental health of J.D. Salinger leading to significant comments on madness and art, also her latest plans for submissions to magazines and competitions, with a 26-line autograph postscript in which she expresses how much she misses living as his wife ("...it is so hard for me to be deprived of doing all the woman-things for you - cooking & bedding & listening & telling you how fine you are & how all my faith is in you. I walk in the thought & love of you as in a sheath of radiance which keeps me. in spite of the nightmares, the strange instinctive guilt I feel at being your wife, and cut off from all the symbolic, rich gestures and acts of a wife..."), scattered autograph corrections, 6 pages, 8vo (177 x 140mm), blue writing paper, headed stationery of Newnham College, Cambridge, 20 October 1956

"...heard rumors yesterday that j.d. salinger is supposed to be in a mental hospital. I feel strangely about him for some reason; I am sure insanity is the most necessary state for a fine artist--that 'divine madness' where the terror & piercing insights he has daily are not locked in retreat or raving but made into works of art; a kind of flickering wild light of susceptibility playing over psychic states which, if frozen, would become intolerable and result in madness. I wish I knew about j.d. salinger..."

Salinger had been one of the authors whom Plath had requested to interview during her ill-fated guest-editorship at Mademoiselle magazine in 1953. Her comments about madness here echo Ted Hughes's opinions; he had written to her in a letter earlier that month that madness meant "your thoughts have autonomous life, whereas sane people have them in harness, under their will, in slavery" (quoted in Clark, Red Comet, p.469).