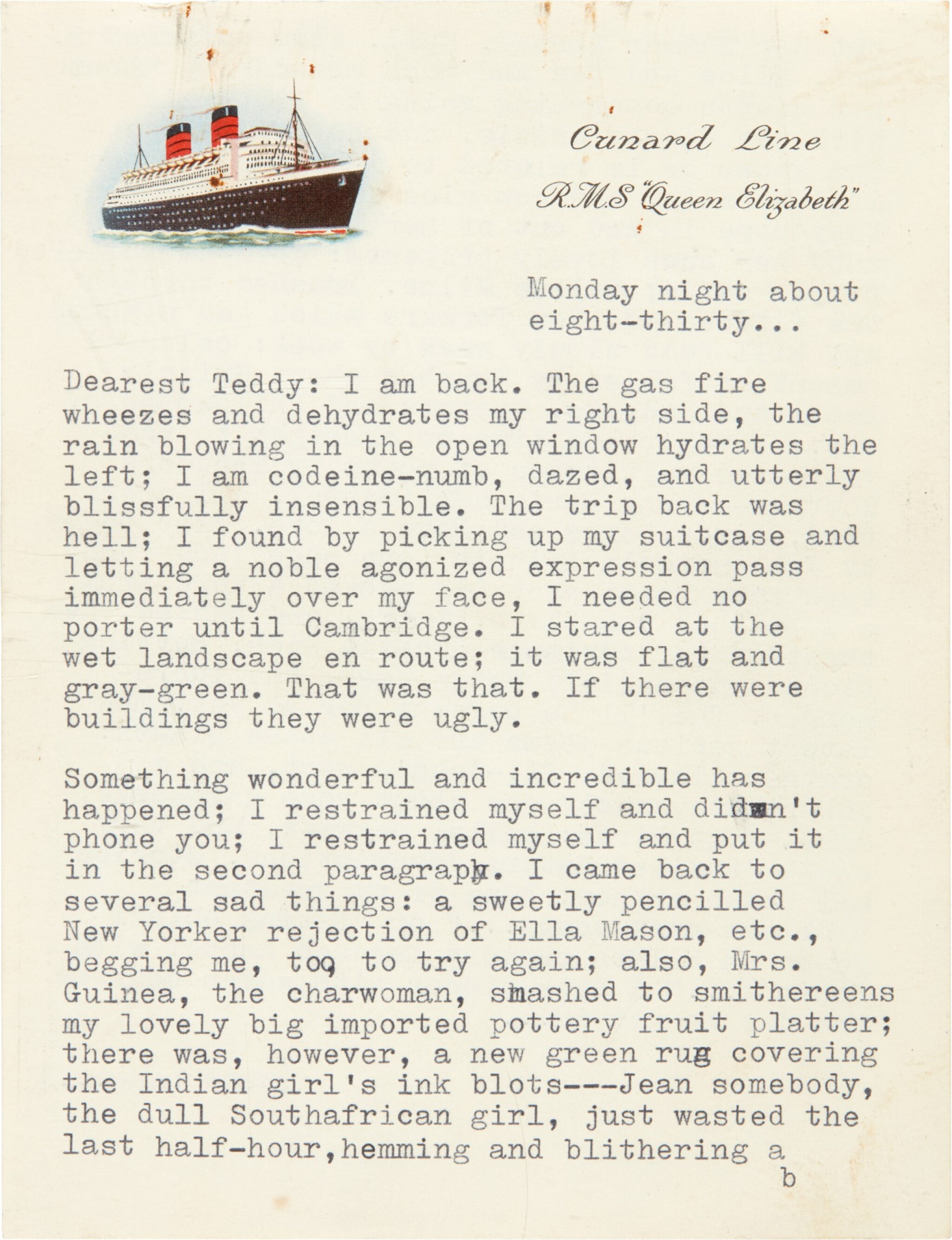 on her return to Cambridge ("...I am back. The gas fire wheezes and dehydrates my right side, the rain blowing in the open window hydrates the left; I am codeine-numb, dazed, and utterly blissfully insensible..."), sharing the exciting news that awaited her return ("...POETRY has accepted SIX of my poems..."), with a lively account of her reintroduction to Cambridge life and preparations for the new term, autograph correction, 6 pages, 8vo (174 x 133mm), RMS Queen Elizabeth headed stationery [but Whitstead, Newnham College, Cambridge,] "Monday night about eight-thirty" [1 October 1956], rust marks from paper clips, small stain

"...I don't know how I can keep still without exploding; I want to share everything with you--rain, rejections, wine, money, acceptances, reading..."

PLATH'S RETURN TO CAMBRIDGE AFTER HER MARRIAGE.

Sylvia Plath had met Hughes at a party in Cambridge to celebrate the inaugural (and only) issue of the Saint Botolph's Review on 25 February 1956, just hours after first reading his poetry in the magazine. They were married less than four months later, and had spent the summer in Paris, Benidorm, and latterly with Hughes's parents at the family home in the Yorkshire moors. She now returned to Cambridge to begin the final year of her Fulbright scholarship. She had come alone, unwilling to admit to her marriage in case it would jeopardise her scholarship. "The trip back was hell" and she writes with little enthusiasm for her rooms at Newnham or fellow students. She had also returned to discover - perhaps unsurprisingly - that the food she had left in her rooms had not been improved by her absence for more than three months ("...the cream crackers are soggy; the nescafe is a hard cake; the strawberry jam is rancid...").

Yet she returned to a triumph that far outweighed these problems, in the form of a letter from Henry Rago, editor of the prestigious Poetry magazine, accepting six of her poems for publication. She was especially excited that that they had chosen "ALL MY NEW POEMS": "It is the consecration of my new writing, which properly began with you and 'Pursuit' and ramped on through spring and summer". Plath was focused, determined, and professional in her approach to her writing. The publication of these poems would significantly enhance her profile and the cash payment moved her a step closer to being able to live by her pen ("...Tutored by your most mercenary self, I ran to count lines: Teddy, it should be about $76 [...] One line was only two words: 'Looks up': that's 25 cents for looks, and 25 cents for up..."). She playfully imagines crowds waiting for them at their triumphant entry into America. Ted Hughes responded to her letter with tremendous enthusiasm: "Joy, joy as the hyena cried. Now you are set [...] It will spellbind every editor in America."

More immediately, however, she prepares for a new term. She had found Cambridge a cold an unsupportive environment and the only company she wants now is her new husband. She vows to keep her distance from fellow students ("I shall be so noncommittal and cold it's death"), and finds some consolation in the presence in her rooms of his leather coat and manuscripts of several of his poems (including "the new version of Hawk in the Rain").