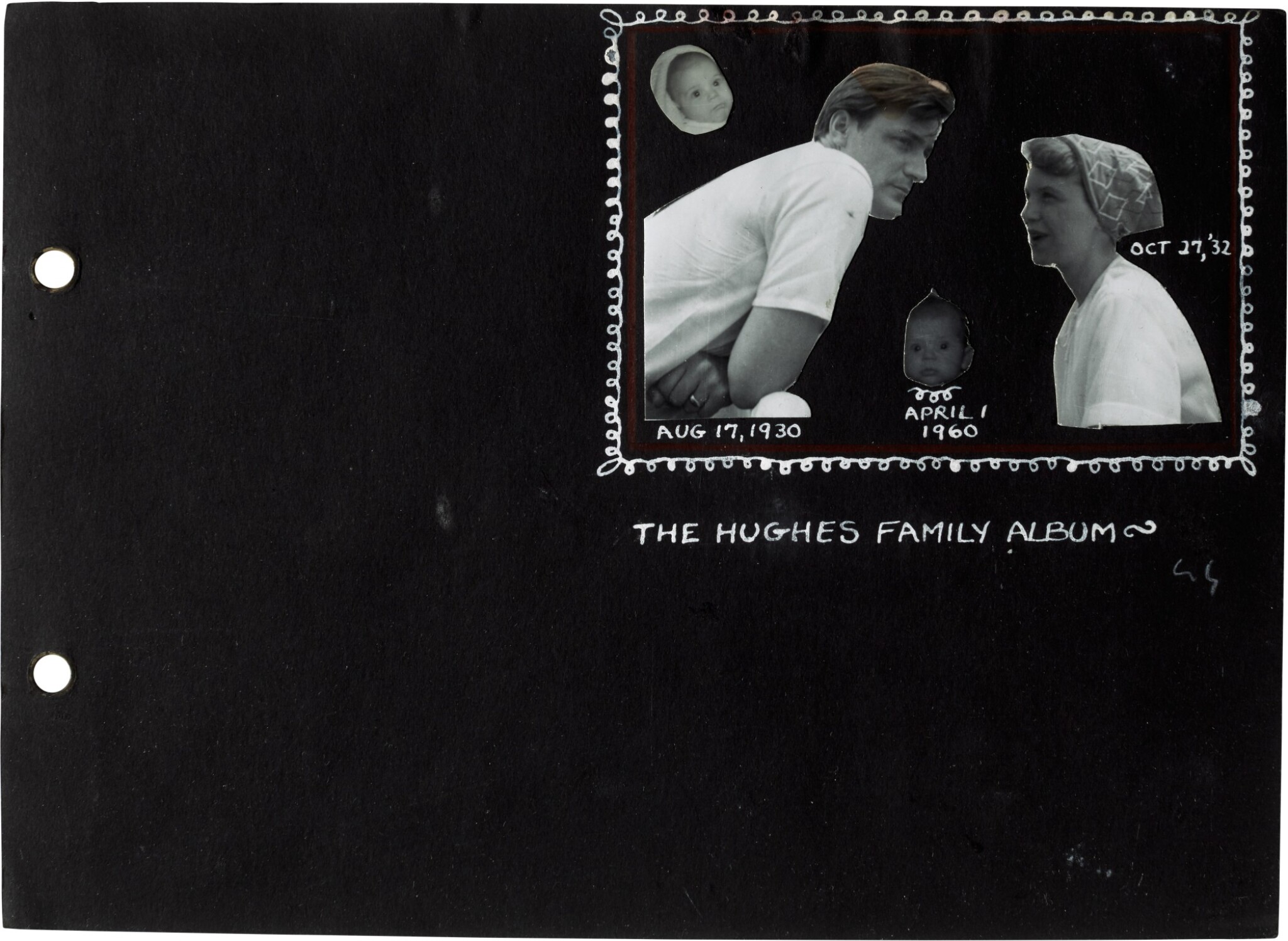 192 photographs mounted on 48 pages, arranged in chronological order, the first 32 pages with captions by Sylvia Plath in white ink, several of the later photographs with captions by her or Ted Hughes on the reverse, the photos mounted with adhesive corner mounts, photos of various sizes, including 10 colour photographs, the photographs chiefly depicting Plath, Hughes, and latterly their children, in England and America, September 1957 to April 1962, with title-page collage incorporated photographs of Syliva, Ted, Frieda, and Nicholas, with birthdates of the first three, oblong 4to (185 x 250mm), disbound, lacking one photograph

A REMARKABLE PHOTOGRAPHIC RECORD OF SYLVIA PLATH'S LIFE WITH TED HUGHES. It is an album carefully assembled by Plath and with her own handwritten captions.

The album begins with photographs taken around the Hughes family home in Yorkshire during her first visit in September 1956, after their return from honeymoon in Spain and before her return to Cambridge (see lots 5-6). There are photographs of their year in Cambridge. Many of the photographs cover their two years in America. There are photographs taken on RMS Queen Elizabeth in June 1957 (see lot 27), their summer cabin in Cape Cod (see lot 28), and time in Northampton then Boston (see lots 29-37). There is a lengthy sequence of photographs from their American road-trip in the summer of 1959 (see lot 39). This is a period that figures strongly in Hughes's Birthday Letters and the photos are a visual record of several of the moments recalled in those poems, from fishing in the Great Lakes, to the harsh sun of the Badlands in Theodore Roosevelt National Park, to the bears of Yellowstone, to the scale of the Grand Canyon, "America's Delphi". The photographs that follow their return to Britain chart both growing domesticity and literary celebrity. There are several photos of the Faber party for W.H. Auden on 21 April 1960 which saw Hughes photographed alongside Eliot, Auden, MacNeice, and Spender. However, the latter part of the album in dominated by baby photos. There are photographs taken in their Primrose Hill flat, on day trips (including several at Stonehenge), and latterly at Court Green in Devon. The album concludes with several colour photographs of the family enjoying the incredible profusion of daffodils in flower at Court Green in April 1962.