James Bond: A Collection of Books and Manuscripts, The Property of a Gentleman
Online Auction: 28 October–11 November 2020 • 3:00 PM GMT • London

The Best of Bond on Bond Street

I t has been said (by an auctioneer, I believe) that modern authors are collected less for the quality of their writing than the colour of their lives. A brutal reflection, perhaps, on the status of literature; but one that Ian Fleming would have appreciated. Nobody understood better than him the value of sensation. It infused his novels and marked every aspect of his career. While Foreign Manager at The Sunday Times he promised to hold the presses if a correspondent was delivering ‘dynamite.’ (Lot 2) He pestered his publishers, Jonathan Cape, with advice on how to improve sales. He sought constantly to make his dust jackets more striking and never hesitated to suggest improvements. Sometimes he designed them himself. But he was also a man who knew the importance of luck. In terms of collectability he has been very lucky indeed: not only did he write well but he lived well; and much of his life – wartime Intelligence officer, bon vivant, romantic - made its way into his books. He also had the unhappy fortune to have died before his time at the age of fifty-six, leaving not a diminishing trail of lesser works but the eternal cliffhanger: what might have happened next? It is this confluence of fact and fiction, life and death that sets him apart from other authors.

The books presented here are remarkable not just for their rarity but for their biographical narrative. Here is Fleming’s life as told by a bibliophile: from his 1918 copy of Boy’s Own Journal to a book he owned at Sandhurst and his 1948 manual of journalism for Kemsley Newspapers; from Bond novels inscribed to friends and colleagues - also to his wife Ann, Bobby Kennedy and his hero Winston Churchill – to copies used by film and TV companies (Lot 9); from a corrected typescript of Diamonds Are Forever to a notebook used while researching one of his last novels, You Only Live Twice (Lot 110). There are nice touches, such as Raymond Chandler’s annotated copy of Moonraker (‘all padding’ he fumes on p.18) (Lot 16). There is a nod, too, to Fleming’s oft-unadvertised role as a bibliophile. During the 1930s he amassed a library of first editions charting milestones in human progress - ‘books that had started something’ - which was considered so important that it had to be evacuated from London during the Blitz. And in 1952 he set aside the manuscript of Casino Royale to launch The Book Collector, one of the most authoritative journals of its kind, which flourishes to this day. Its editor was the redoubtable John Hayward, to whom several of these volumes are dedicated.

Fleming would have relished the irony of a collector becoming himself collectable. He would also have enjoyed the idea of his story being told through a collection of his own books. To him, stories were paramount whether on paper, in life or, in this case, posterity. Famously, he boiled down his recipe for a successful thriller to a few short words: you simply have to turn over the page. I think you’ll find this catalogue fits the bill.

The sale includes inscribed first editions of every James Bond book including inscriptions to personal friends and literary inspirations. 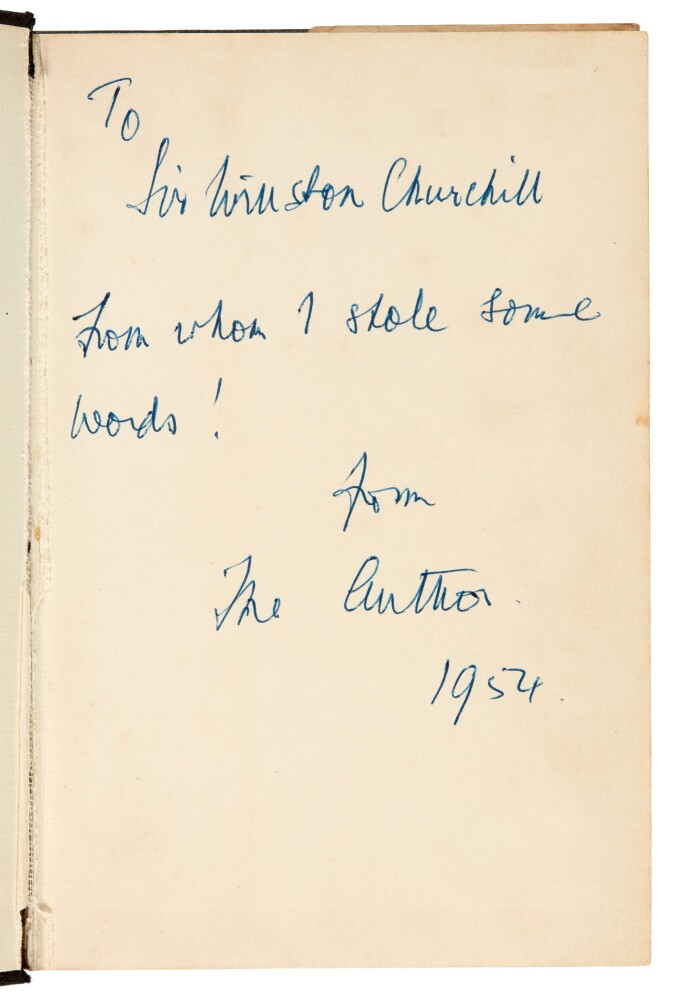 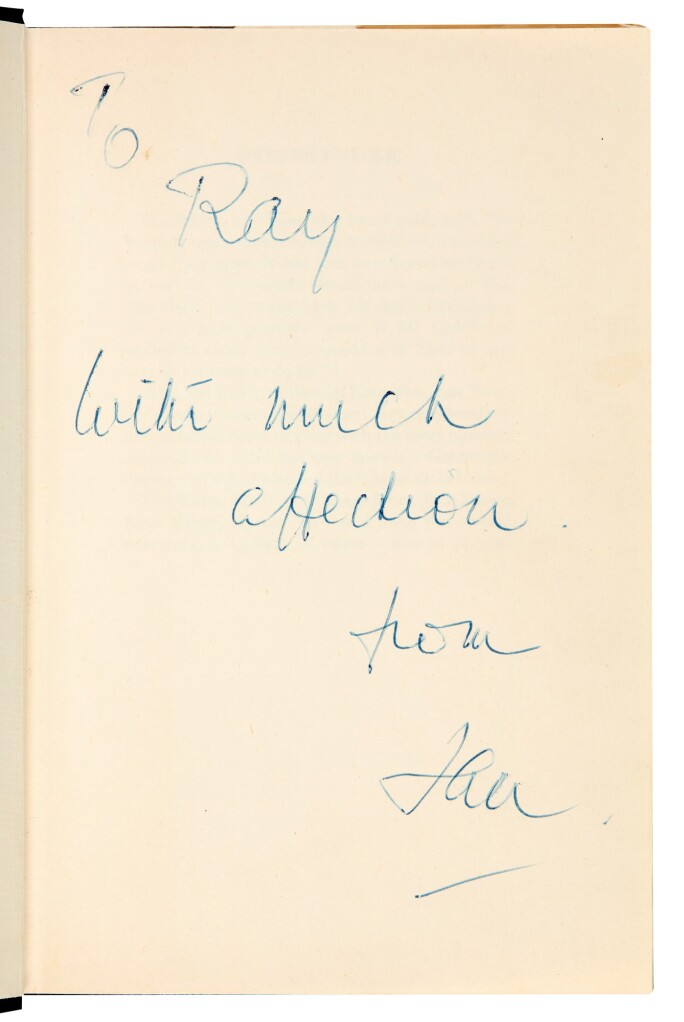 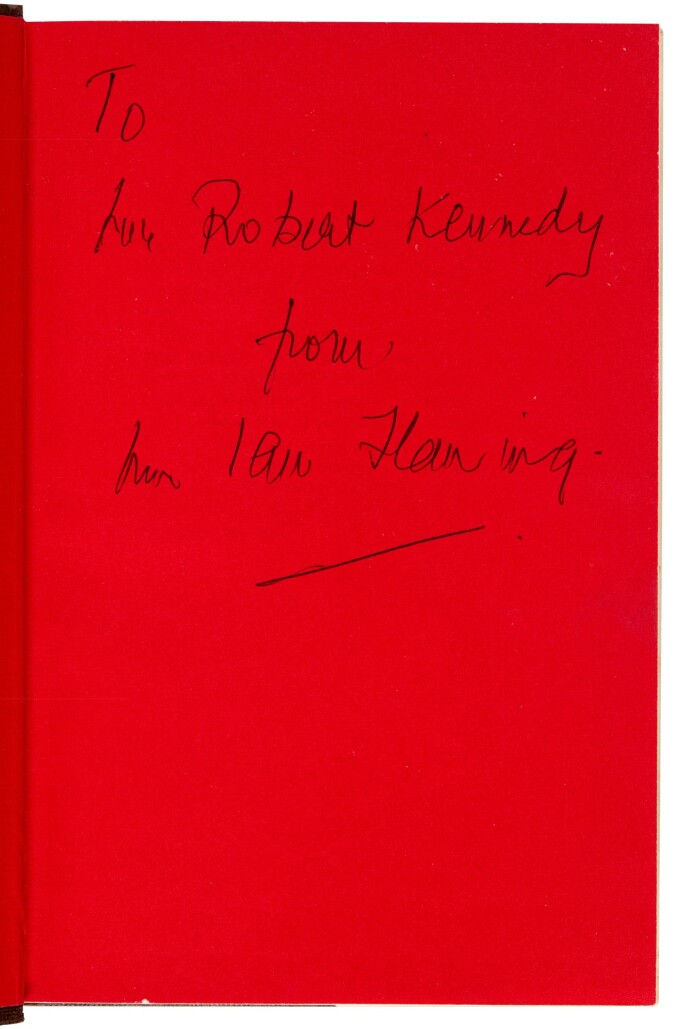 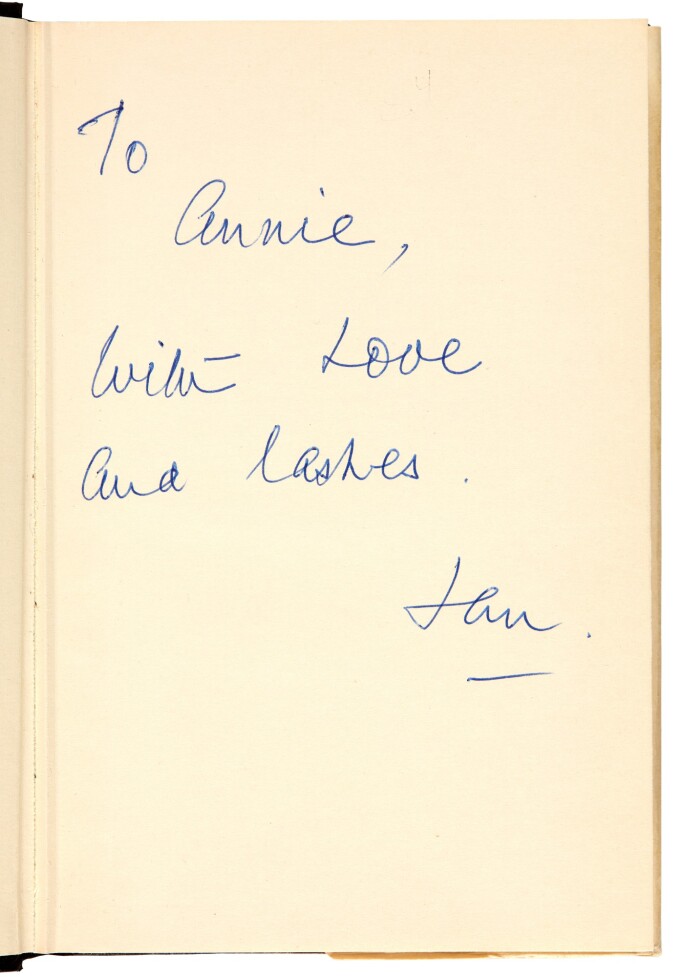 From the Library of Ian Fleming

Beyond Bond, a remarkable selection of books from Fleming’s own library also feature, including a copy of The Boy’s Own Annual, given to a ten-year old Fleming at Christmas and a fine presentation copy of close friend Raymond Chandler’s Playback. 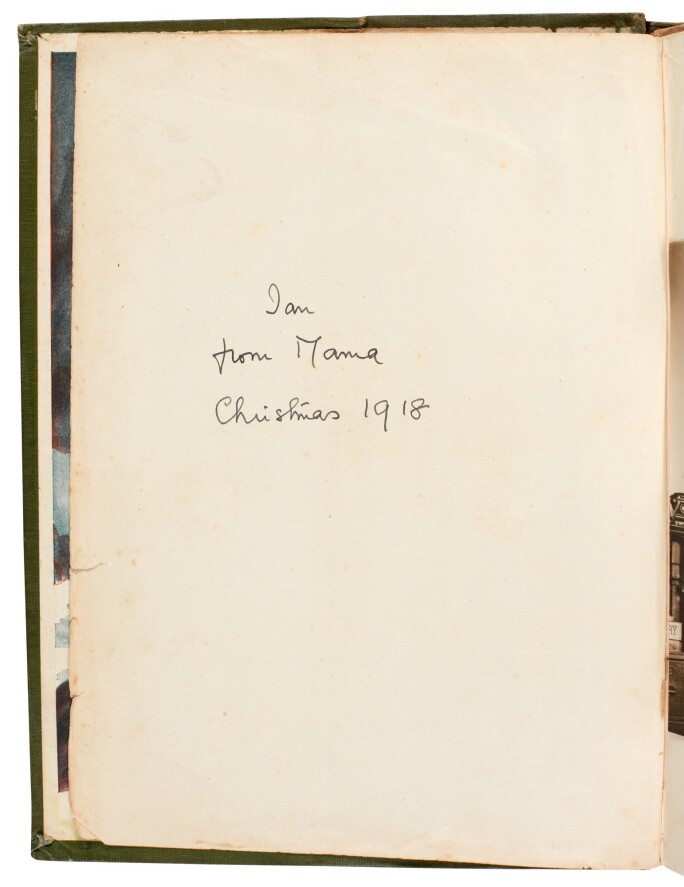 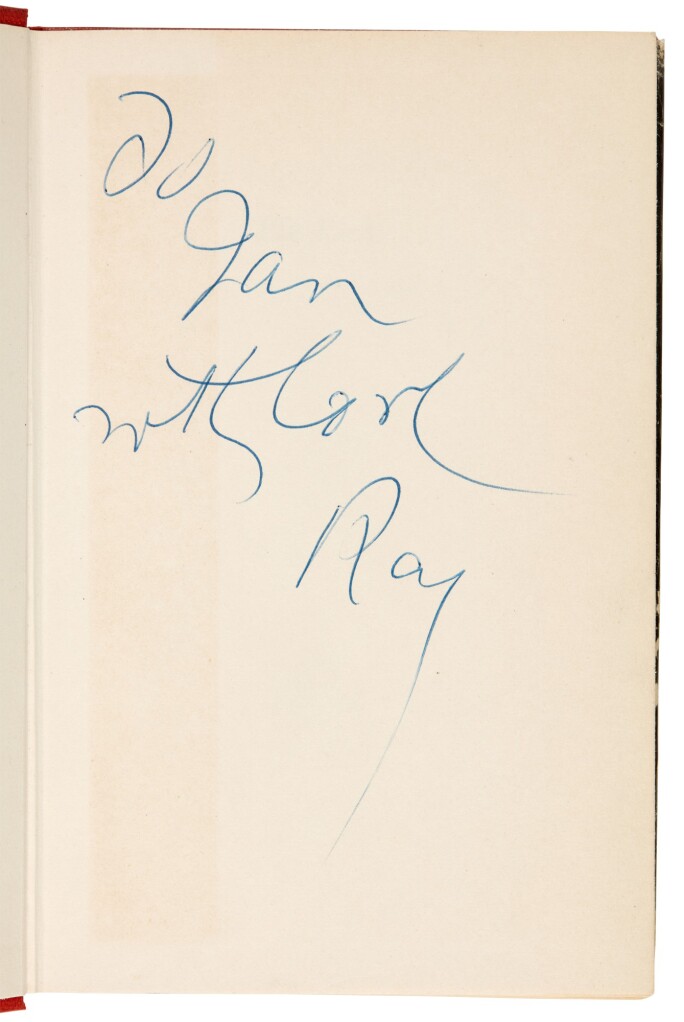 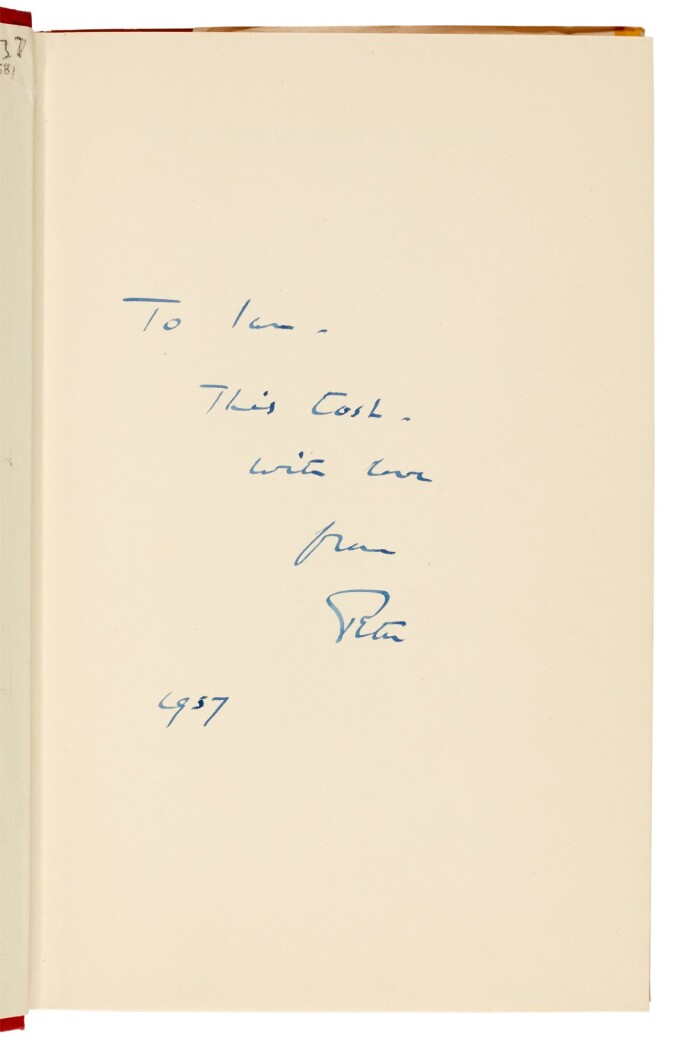 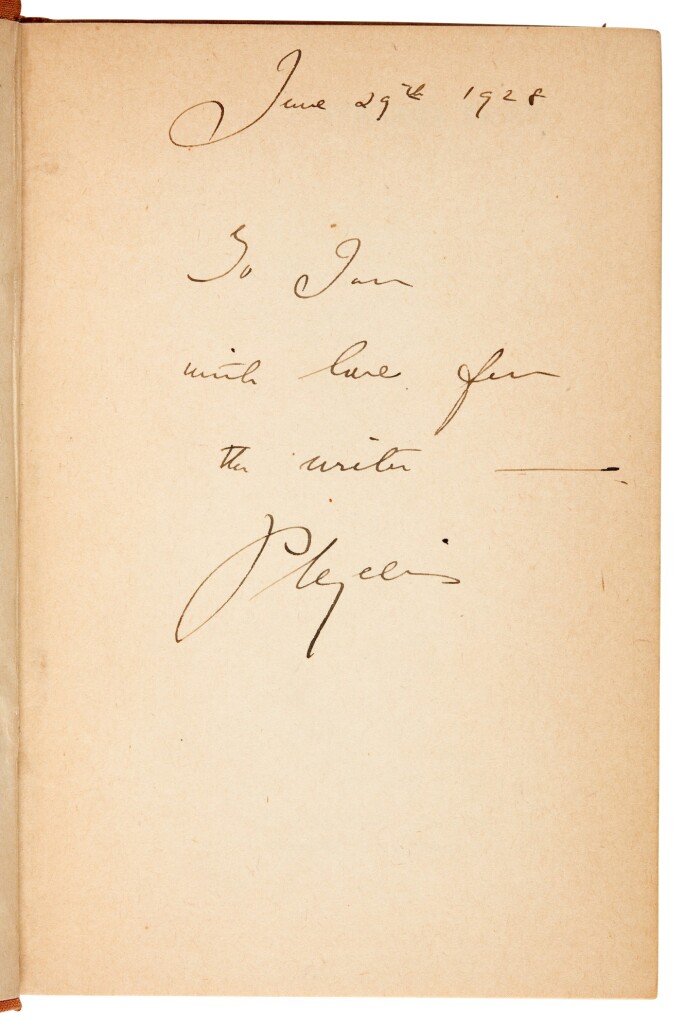