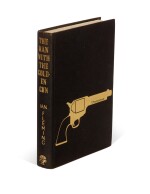 THE MAN WITH THE GOLDEN GUN. LONDON: JONATHAN CAPE, 1965

A LEGENDARY RARITY IN COLLECTING MODERN FIRST EDITIONS AND A HIGHSPOT IN ANY FLEMING COLLECTION.

During binding, the cost of blocking each copy with the gun design on the upper board proved to be prohibitive. Jon Gilbert notes that "the decision to cease stamping a golden gun was purely economical... What is apparent... is that these copies were sent to Commonwealth countries..."

The total print run for the first edition was 81,890 copies making these 940 copies a highly collectible rarity.