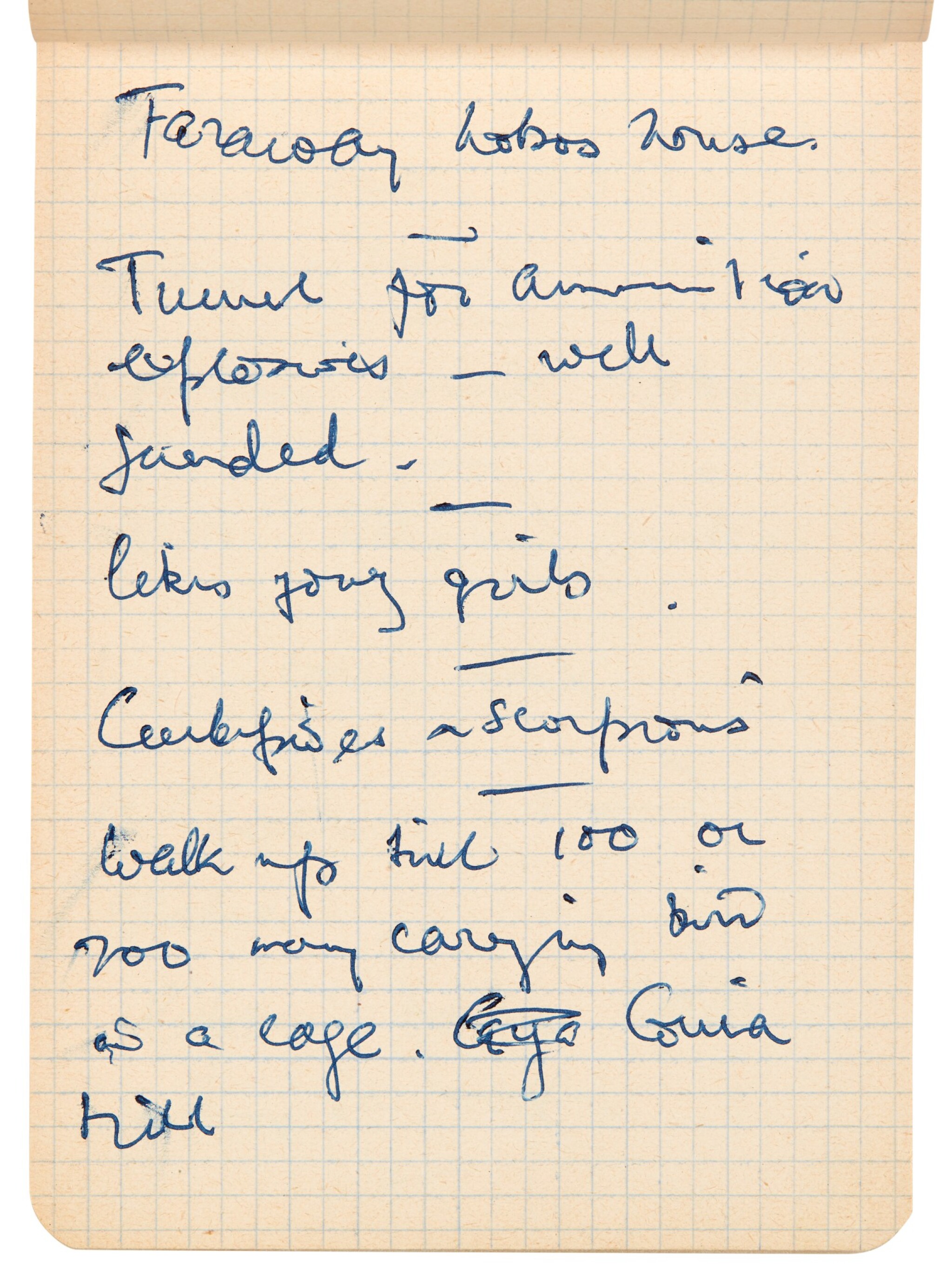 MANUSCRIPT NOTEBOOK USED DURING A TRIP TO THE FAR EAST

recording vivid descriptions and vignettes of places, people, and experiences, commencing with landing in Beirut ("...a sprawl of twinking hundreds & thousands under a theatrically new moon that swayed from heavens to ground as the Comet turned in to land..."), continuing on to Hong Kong, Macau, Japan, and Hawaii, with notes for future use in Bond books ("...GOKUHI = Top Secret..."), also hotel and restaurant addresses, schedules, and other practical notes, some entries cancelled in pencil or red ink, 54 pages, plus blanks, November 1959, graph paper, oblong 12mo perfect bound notebook, navy blue wrappers stamped "Bloc-Notes | Nr. 3" with a crossbow design, collector's red cloth chemise and red morocco-backed slipcase

IAN FLEMING'S RAW AND VIVID FIRST-HAND IMPRESSIONS OF THE FAR EAST. This notebook was used by Ian Fleming during the first part of a circumnavigation of the world that he undertook as one of his last assignments for the Sunday Times in November 1959, a trip subsequently worked up into his travel book Thrilling Cities. It includes substantial material that was subsequently worked into Bond's trip to Japan in You Only Live Twice, but the locations included in the notebook show that it does not date from his 1961 trip to Japan (as described in the Rechler sale).

Fleming was introduced to Hong Kong by his friend Richard Hughes. His notes convey his fascination with the city, whether it be the Lok Kwok Hotel (a brothel), the antiques and curios on display at Cat Street Market from opium pipes to a "naked ivory woman used by doctors", or the local wildlife ("...No seagulls in Hong Kong. In Shanghai they say seagulls have come back because no longer have to fight with humans for the refuse...").

A short trip to Macao was dominated by a visit to the "gold king", Dr P.J. Lobo, the closest thing to a real-life Auric Goldfinger. Fleming's notes record secret tunnels, caged birds, and Lobo's boasts about his wealth as well as more fragmentary impressions ("...Opium, sex, neuter, waste away. | Insect wing sails of junks...").

Then it was on to Japan, where Fleming and Hughes were joined by "Tiger" Saito. These notes are of particular interest as they informed Fleming's treatment of Japan in You Only Live Twice. Again, some of his most vivid impressions are terse notes ("...Willow pattern interior | earthquake for breakfast..."). He lists the content of his room in Tokyo in some detail, describes Japanese antiques with a connoisseur's care, and even gives his own summary of Eastern dualism under a sketch of the Yin-Yang symbol ("...Only the good can be bad - only the believer can blaspheme - only the black can be white...”). The notebook also contains notes from a visit to a Kodokan judo institute, and hot springs, as well as the small details that enliven Fleming's books such as the Japanese preference for sweet sherry.

Another recurring subject in this notebook is is the experience of travel itself. This was the beginning of modern commercial air travel, and Fleming's round-world trip led him into various thoughts about the "Jet Age": "Round the world in 30 days - but at what price in blurred impressions, fudged facts..." Alongside his delight at the beauty of the world from the air and the amazing new ability to travel the world with such speed, he carefully records what are now the familiar down-sides of air travel - red eye, the unpleasantness of air pressure changes, and jet lag. More dramatically, he records his impressions when his JAL flight across the Pacific (on Friday 13 November) developed a fault, had to dump fuel, and prepared for a possible emergency landing at sea. After this drama it was onward to Hawaii, and the notebook ends with Fleming on Waikiki beach: "eternally in & out with the waves for the past 300 years - the place of the eternal honeymoon where only the bill is vile."