T he breadth of this magnificent collection of gold and porcelain boxes unites beauty and rarity with impeccable provenance, representing objects of vertu produced in the most important European centres over a period of two centuries, from a rare Southern-German enamel snuff box, dated 1671, to the pearl-set leopard ‘form’ snuff box for the Chinese Market by Sené & Neisser, made in Geneva in 1801–1804.

A Treasury of Vertu furthermore encompasses the idea of a museum-quality Schatzkammer, with a very rare gold-mounted hardstone box by Hoffman representing brightly coloured-carved hardstone beetles on a delicate creamy agate ground, circa 1765, as well as two gold-mounted pietra dura examples and a ‘surprise’ souvenir by the Dresden court jeweller Johann Christian Neuber. Of utmost rarity and 18th century scientific interest is the Steinkabinett by Christian Gottlieb Stiehl (1708-1792) – the lid of this ingeniously inlaid ‘Zellenmosaik’ hardstone box opens to reveal what resembles a stained glass window, and the original booklet contained in its secret compartment in the base lists all the stone specimens used for the carefully arranged hardstone surface of this precious masterpiece. Also represented are rare and wonderful boxes made in London, Paris, Stockholm, Geneva, Amsterdam, Vienna and Meissen, displaying different techniques and materials, highlighting the limitless inventiveness of the goldsmiths, lapidaries and enamellers during two and a half centuries. 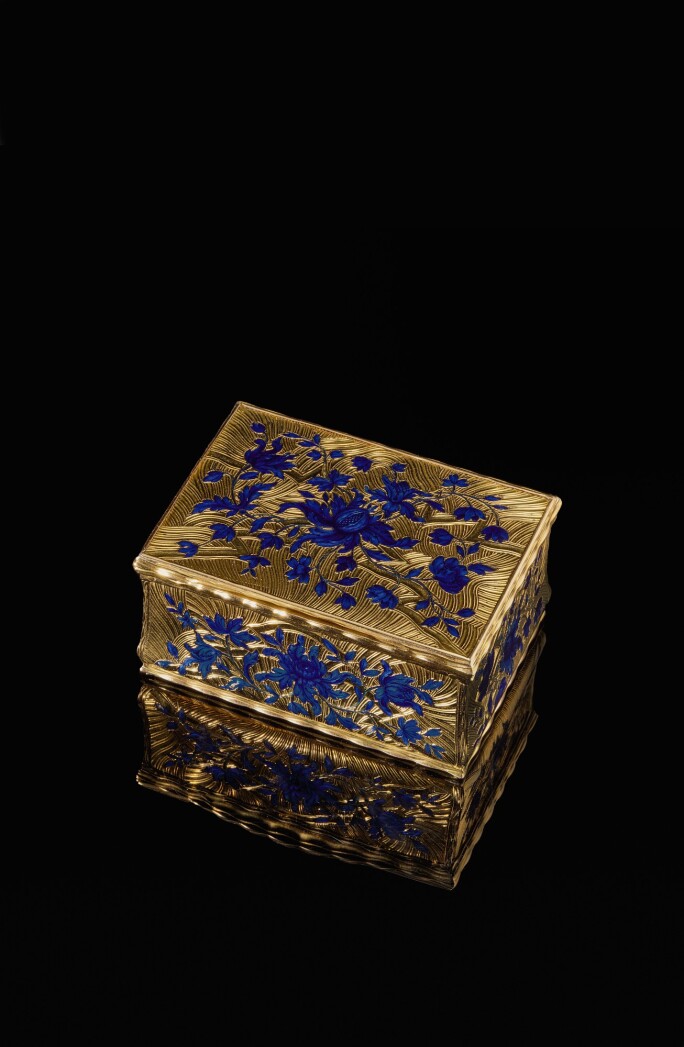 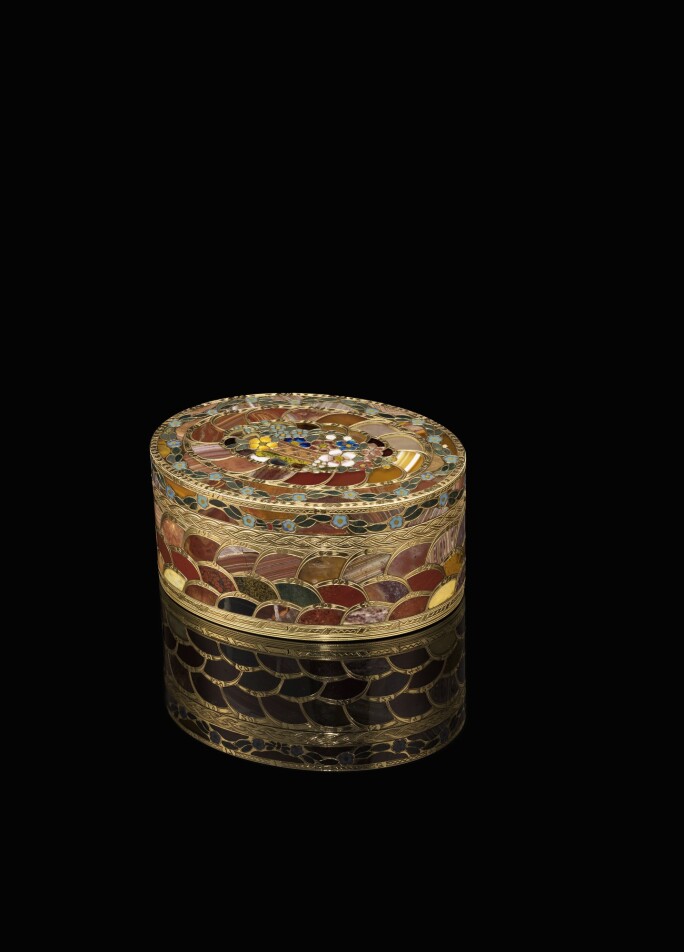 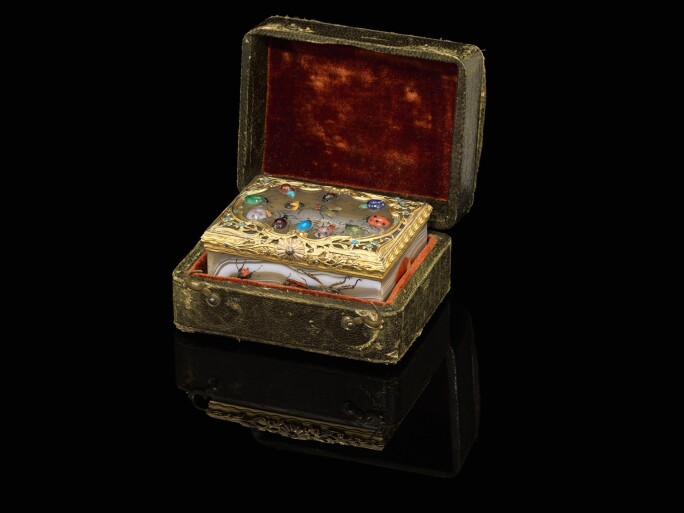 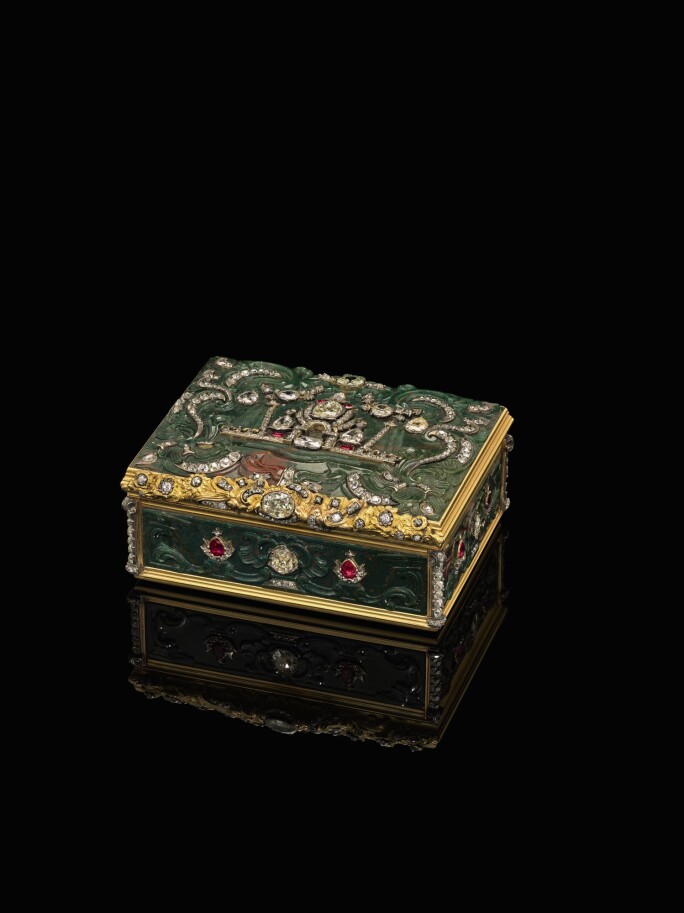 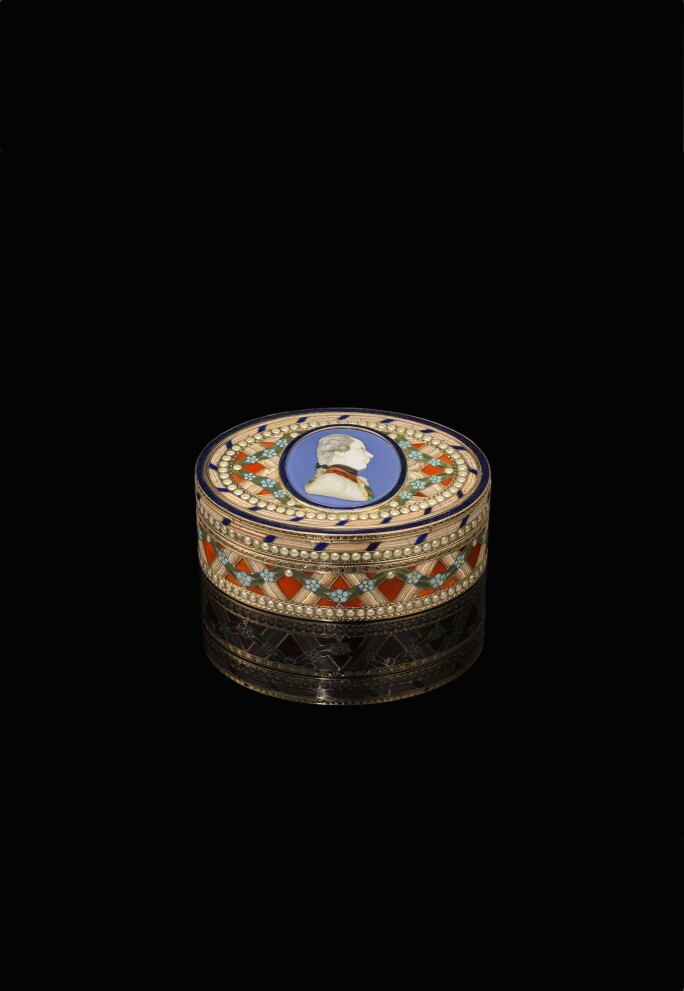 Fashion, Function, Fabulous Luxuries: The History of the Gold Box

Objects of vertu are traditionally defined as small-scale objects of precious materials that are to be admired as works of art, usually serving a practical purpose. Originally this would have referred to the ability to keep tobacco or snuff in a tight-fitting pocket-sized container to prevent it from drying out, which later evolved into a full ritual surrounding the consumption of snuff, a sort of scented tobacco mixed with oils. The variety of this museum-quality treasury of Vertu, however, makes it obvious that a practical purpose could be somewhat neglected in favour of considering these boxes as marvellous masterpieces on a miniature scale.

It is remarkable that a whole industry of workmen has been built on the production of snuff boxes for the course of nearly three centuries, and indeed the story of the gold box is very closely linked to mankind‘s sociological and cultural history. As ever so often, it all started with a human weakness - the addiction to tobacco following its discovery in America by Christoph Columbus. By circa 1570, it was widely spread in Europe, according to numerous accounts of travellers. Tobacco was then grown in Portugal, where it had arrived from Brazil, and further spread to Spain and France, where it was soon esteemed in courtly spheres. Initially praised as a medicine, tobacco had reached its status of a recreational drug in the 1630s, making smoking a widespread fashion, a social activity and pleasure. From France it the fashion made its way to the rest of Europe from around 1660, arriving in the Netherlands and Germany a little later, probably introduced by Huguenot refugees. The earliest snuff box in the sale, a gold-mounted example decorated with enamelled scenes taken from the Old Testament and dated 1671 (lot 1), originates from that first period.

Later on, snuff boxes were exchanged as presents among royalty and nobility, as a subtle form of payment for someone’s work, as tokens of love, power, gratitude or friendship, such as the gold-mounted agate snuff box (lot 26), presented by Princess Catherine Dashkov (1742-1810) to her companion. While they remained hugely popular as the most intellectual form of status symbols throughout the 19th century, gold boxes also served the function of intricate conversation pieces between connoisseurs. The charming gold and enamel box by James Bellis, 1765 (lot 13), and the Swedish basse-taille enamel example by Anders Liedberg (lot 14) would have served this purpose, and perhaps even more so (lot 11) in this sale. This unusual gold box of German origin contains fine fruitwood marquetry panels representing chinoiserie scenes whose exact source still remains the subject of scholarly discussion.

While single examples of other fashions in gold box making are represented in this sale, such as a boîte- à-minaitures with painted classical scenes of Tivoli (lot 30) and the fashion for mounting exotic materials such as mother of pearl (lot 29), the focus of this carefully curated private collection lies on the 18th century, during which the bijoutiers of each centre of production would show their latest achievements in working gold, such as chasing, engraving and engine-turning (see also lot 2). This was combined with certain materials that were available in each region, such as the ‘Schlottwitz agate’ mined in Saxonia and used by Johann Christian Neuber for his magnificent inlaid hardstone gold boxes, such as (lot 16) in this sale. Benefitting from local resources and craftsmen, export soon became an interesting aspect of the trade in gold boxes, which were then modified to match a specific taste of a foreign market, such as the wonderful bloodstone box set with a firework of jewels, framed by diamond-set scrolls, probably added for the Russian market in the late 18th/early 19th century (lot 17).

Nature’s wonders and especially animals, have served both as a subject and wider source of inspiration for artists for as long as artworks exist. While some of the most famous drawings or paintings represent animals, the decorative arts took this idea a step further over the course of centuries by using nature’s own materials, as 16th century silver-mounted nautilus shells, ostrich eggs or coconut cups show. In the category of objects of vertu, particularly for gold boxes, animals play an equally significant role. One finds mythological animals, such as Juno’s peacock, finely chased in gold on the snuff box by Frantz Bergs, circa 1730 (lot 5) , as well as more enigmatic examples, among them a jewelled hardstone snuff box carved as a ram playing the flute while wearing a diamond-set tiara (lot 20) . Made in around 1770 in Germany, this imaginative snuff box represents both society’s interest in fables and the bijoutier’s fascination for hardstones at the time, especially in Dresden and Berlin. This fascination for locally mined hardstones, combined with an interest in nature, fostered by the availability of botanical and entomological prints, led to the creation of an incredibly rare and extraordinary beautiful agate gold box, applied with lifesize hardstone ladybirds and beetles confronting a fly, a naturalistic stag-beetle and colourful butterflies with the most delicately veined wings on the sides (lot 18) .

Probably from the same origin but dating a century later, are two other animal-shaped hardstone boxes in this sale. The choice of a hardstone of dark colour which was carved to resemble the physiognomy of a boar (lot 36) is as clever as the way the hardstone shell of the snuff box in the shape and life size of a turtle is structured to emulate real tortoiseshell (lot 37). While these boxes also delight with the friendly expression of the animals, almost making one think of a nursery rhyme or the fable in which their ways may have crossed, the gold-mounted bonbonniere in the shape of a hen (lot 35) plays at the protective characteristics of a mother hen with this carved example showing both twin chicks tucked under the mother hen’s wings. Making use of yet another aspect of flora and fauna, the Geneva bijoutiers of the early 19th century, such as Sene & Neisser focused on the beauty and elegance associated with feline predators, just like jewellers such as Cartier chose the panther for its elegant and energetic associations. The beautifully enamelled ‘form’ snuff box (lot 31) with the outlines of a reclining watchful leopard is one of the most elegant of its type and was made for the Chinese Market, as another reference to a mythological animal on the base shows. The serpent, here painted within brightly-enamelled peaches and jasmin, has traditionally been associated with auspice, honour, and good fortune, adding yet another layer to the manifold and complex symbolism of animals used for objects of vertu. 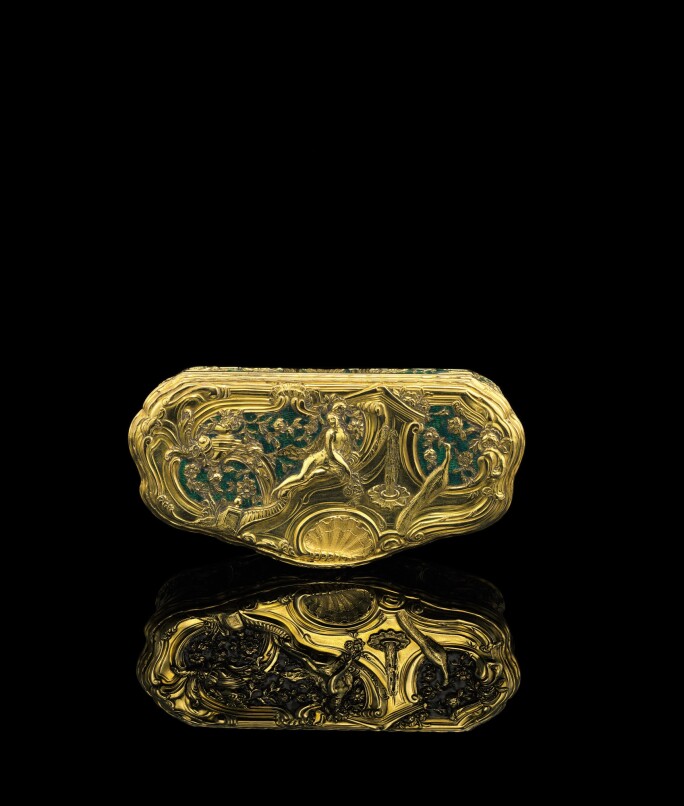 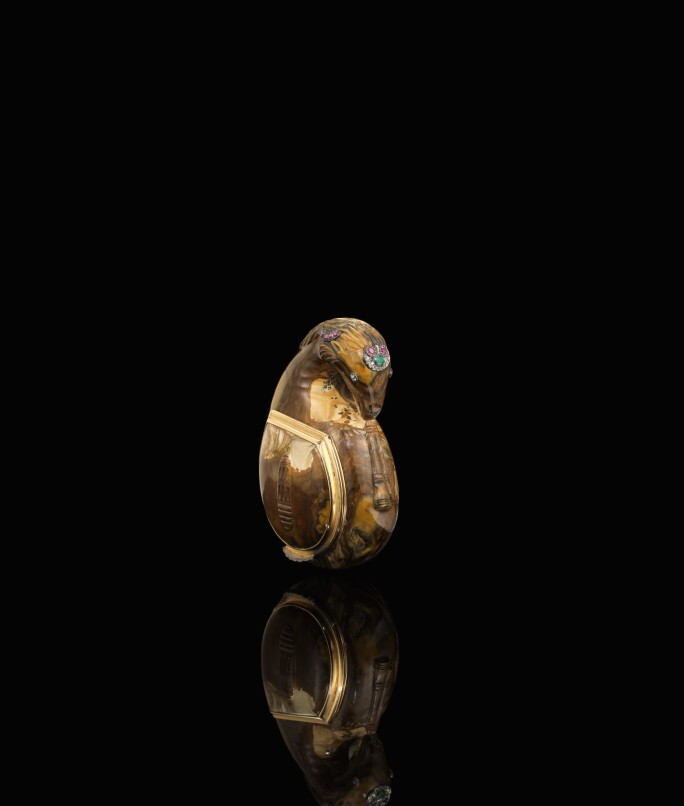 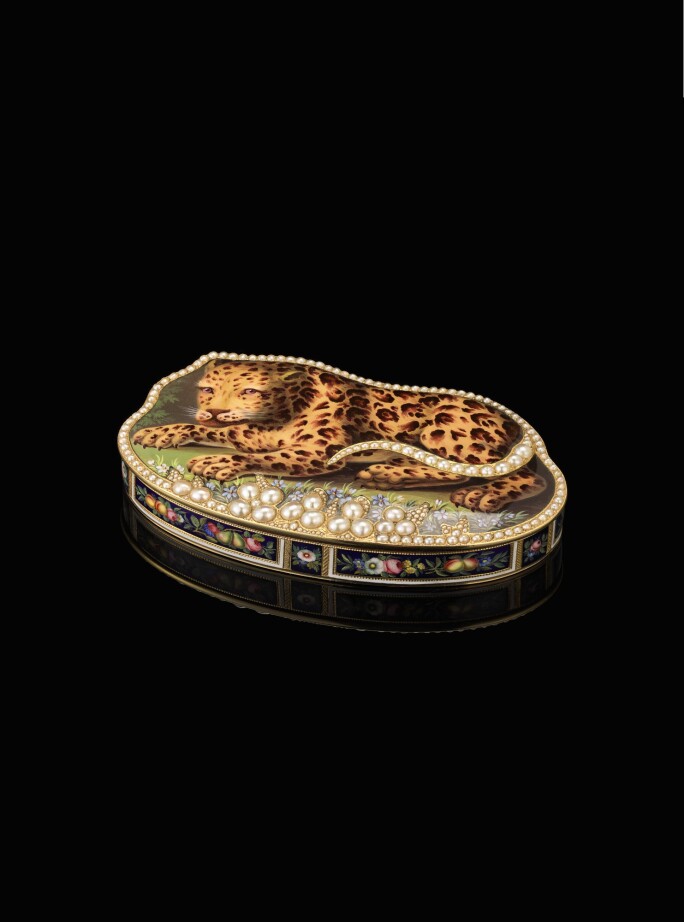 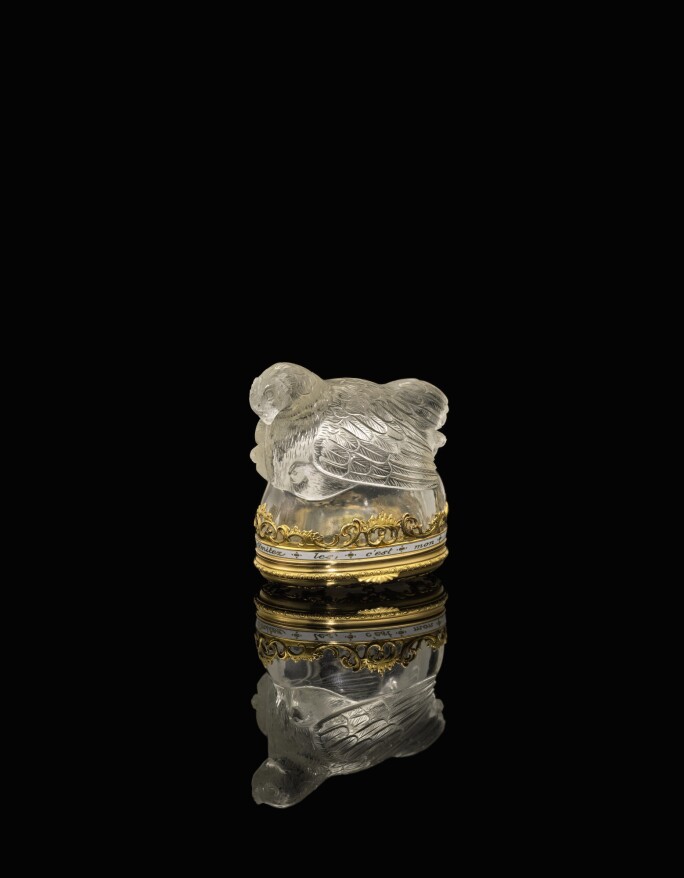 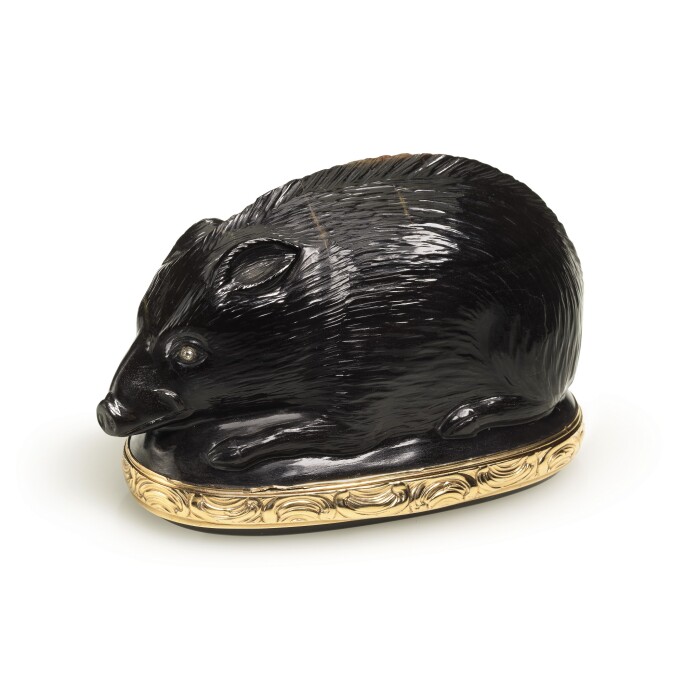 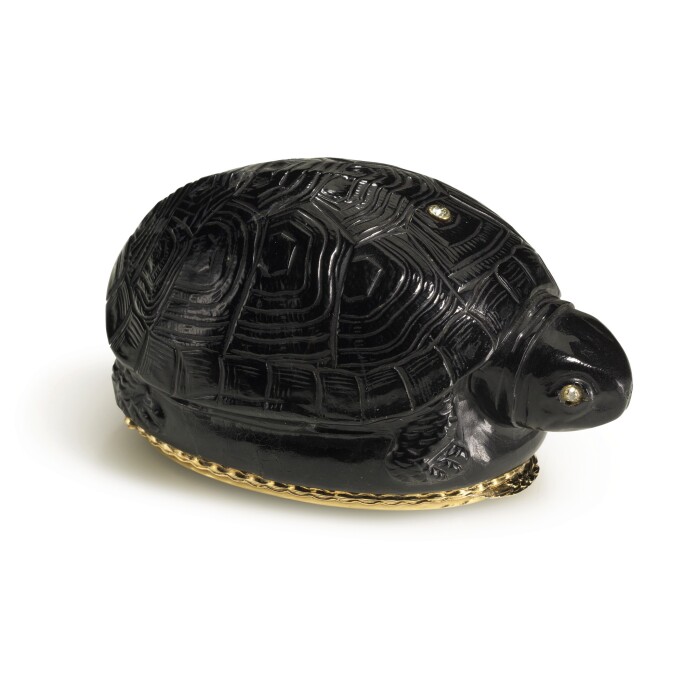 "What seemed, however, most to charm the people who shewed the cabinet, was a snuff box consisting of various gems, none bigger than a barley-corn, each of prodigious value, and the workmanship of more, every square being inlaid so neatly…; a false bottom besides of gold, opening with a spring touch, and discovering a written catalogue of the jewels in the finest hand-writing, and the smallest possible"

This observation was written by Hester Lynch Piozzi during a visit to Vienna during her Grand Tour between 1784 and 1787, where she saw a so-called Steinkabinett by Christian Gottlieb Stiehl (1708-92), (Alexis Kugel, Gold Jasper and Carnelian, Johann Christian Neuber at the Saxon Court, London, 2012, p. 225). Highly esteemed for their utmost beauty, quality, rarity and scientific approach as early as a decade after they were created in the 1770s, most of the Steinkabinettstabatieren by the Dresden jeweller now belong to distinguished private or museum collections. Only ten examples are known to exist, many of which have been included in the most prestigious 20th century sales of decorative arts. It is with great pleasure that this extraordinary hardstone specimen box (lot 12), complete with a booklet contained in the secret compartment will be sold at Sotheby’s again, nearly seventy years after it was last seen by the public in the spectacular sale of the Palace Collections of Egypt, held by Sotheby’s in Cairo. Over the course of eight days in March 1954, 1261 works of art in precious metal were sold in the Koubbeh Palace in Cairo, among them 18th and 19th century hardstone or enamelled gold boxes, including two Frederick the Great boxes, the rarest pocket watches and Fabergé, amassed by different generations of the Egyptian Royal Family, as well as gold boxes by Johann Christian Neuber (1736-1808).

While Neuber is best-known for Zellenmosaik (cell mosaic) inlaid boxes or Galanteriewaren, such as the gold-mounted hardstone 'surprise' aide-mémoire (lot 19), also containing a secret compartment for a portrait miniature, the petite jewelled hardstone gold box for a lady, inlaid in a basket pattern of Schlottwitz agate (lot 16), or the slightly more serene example applied with the profile of Joseph II, Holy Roman Emperor (lot 15), Christian Gottlieb Stiehl’s Steinkabinett is even rarer in that it still contains the original booklet listing all the hardstone specimens. As such, it combines the scientific side of thinly-cut translucent hardstones mined in Saxonia, set à jour between narrow gold cloisons, with the beauty partially achieved by the harmonious choice of hardstones according to their colour and the ingeniously inlaid lid, resembling a stained glass window. Neither His Majesty King Farouk I, nor Alexander Baring, 4th Baron Ashburton, member of one of the most important families of gold box collectors, could resist the captivating power of this magnificent work of art on a very small scale. 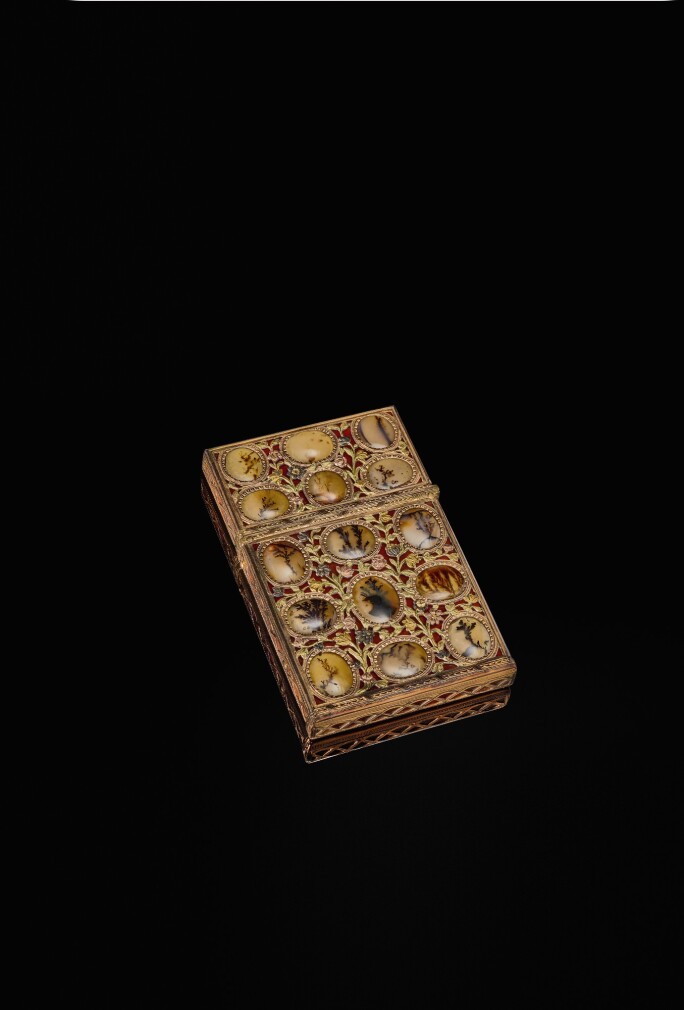 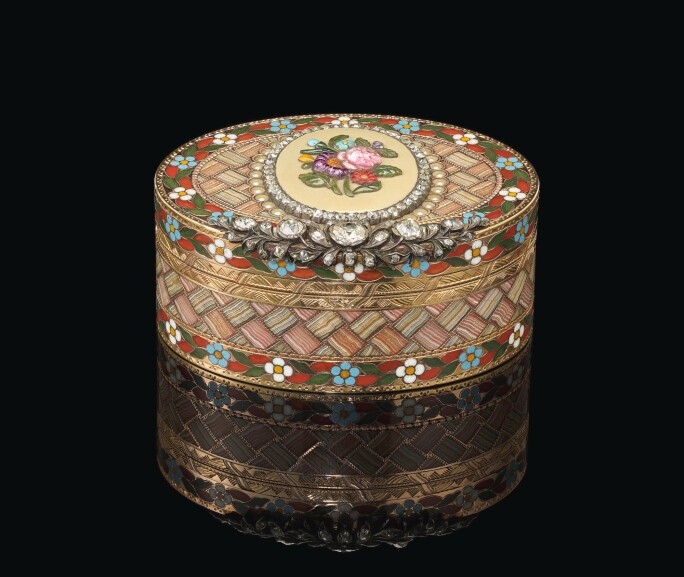