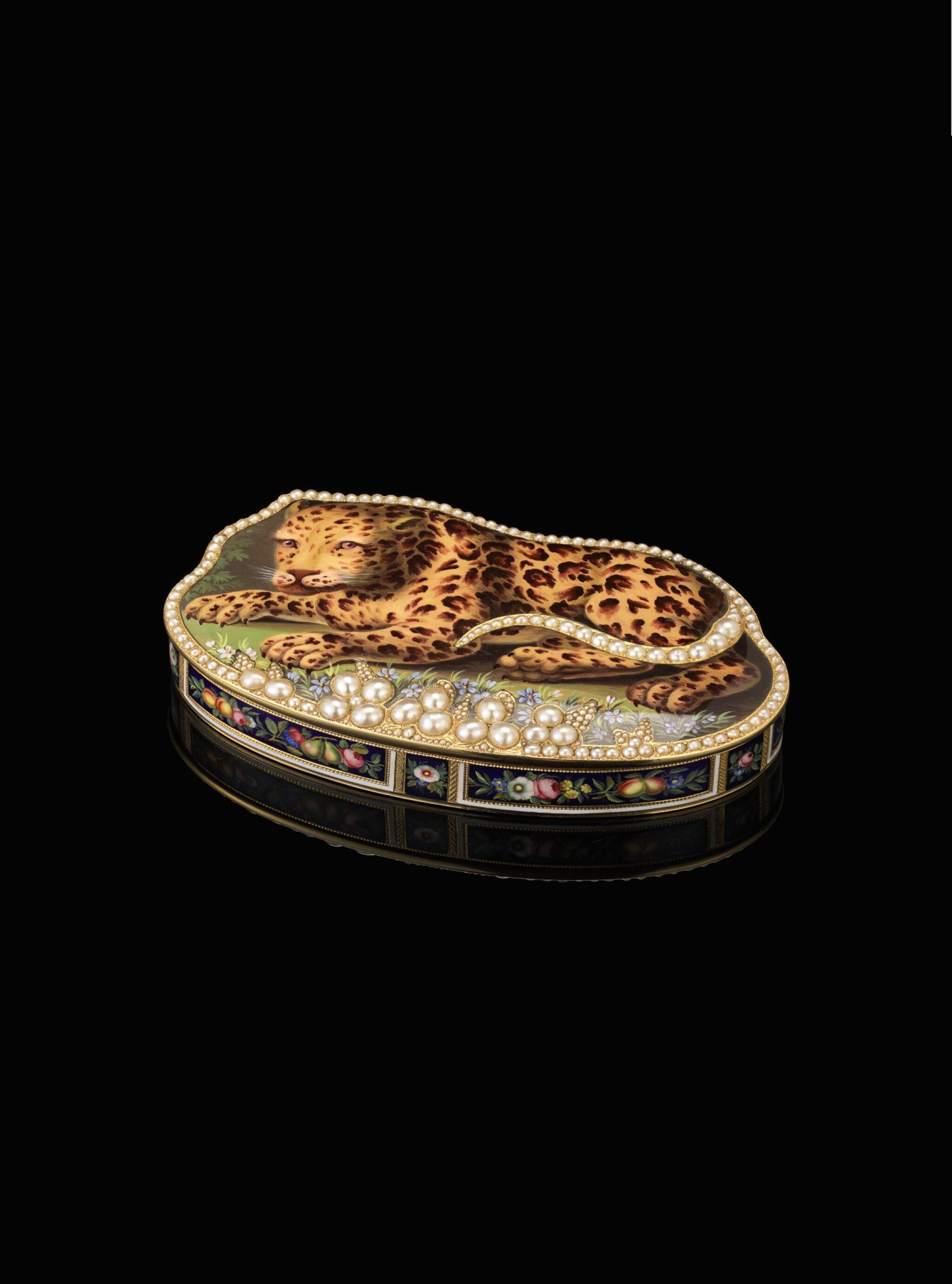 the lid painted as a watchful leopard with graduated seed pearl tail, reclining gracefully in a flowery meadow, the foreground with tiny pearl grapes transitioning into a pearl border, the base painted with a serpent gliding towards a cluster of ripe peaches and jasmine, within a white, black and green taille d'épargne enamel leaf and flower border, the sides further painted with flowers, peaches, pears and strawberries on a blue enamel ground, maker's mark only, in a leather case

An elegant box in very good condition, bar some minor restoration to enamel on the sides

One of the makers of the present box was Henri Neisser, a bijoutier who worked in the Geneva fabrique, famous for its enamelled watches and objects of vertu, described by a visitor in 1791 as a place of ‘free and intelligent artists who love their work …, and to whom their professions owe new methods and their trade new resources …. Here one can find a casemaker who gives a delicate form to his works and a precise finish to his hinges, there one sees bijoutiers of refined taste who invent new areas to exploit – there are enamellers who, no less skillful, diversify the enamels… ' (Marc-Théodore Bourrit, Itinéraire de Genève, Lausanne et Chamoni, J.E. Didier, Chamonix, p. 52-53). Neisser had arrived in Geneva in 1783, where he worked as a compagnon bijoutier for Isaac Forget. In 1798, he went into business with Messrs Sené & Detalla. Independent evidence shows that the partnership of Sené & Detalla became Sené & Neisser in October 1805, and a joint mark was entered in 1807. One year later, however, following Sené’s death in November 1808, Neisser registered a mark on his own, and a second one in 1815.

As Jean Picot noted in 1817, the styles of gold and enamel boxes made in Geneva varied according to their destination: 'Boxes with most complicated automata, objects of the most fantastical forms, well suited to flatter the luxurious … tastes of the great rulers of the Orient’, made for export to the Chinese market, even exceeded examples made for the Ottoman Market in sumptuousness and inventiveness; their ‘cases were enamelled and decorated with painting or gold spangles bordered with jewels and above all pearls'.

This type of gold and enamel box with the outlines of an animal, fruit or musical instruments was extremely desirable for the Chinese market. The choice of a somewhat modified subject of a serpent and peaches on the enamelled base of this box, rather than following the traditional European subject of a snake and apples as a reference to the Garden of Eden, is another indicator for the destination of the present lot: serpents have traditionally been associated with auspice and honour in China, as well as good fortune, a long life and harvest. In addition to that, the peach is an equally popular symbol, also often to be found on Chinese porcelain and other decorative arts, and stands for immortality and unity.

‘Half-pearl … is the name given to such pearls as are round and spherically domed and are either somewhat flat or almost the shape of one half of a whole pearl of the same diameter …, usually they are the better portions of defective whole pearls which are sawn or split by hand into two ‘halves’ with a minute saw’. According to the authors of The Book of the Pearl: Its History, Art, Science and Industry between one and a dozen workmen per manufacturer were only in charge of splitting the pearls for decorative borders or jewellery (George Frederick Kunz and Charles Stevenson, New York, 1908, pp. 392-94). In the late 18th and early 19th century, these half pearl borders were often used as decoration for objects of vertu, destined for both the domestic market and export to the Far East. The fascination for pearls has a long tradition in European jewellery and objets d'art. Simulated pearls, on the other hand, were less prone to damage and discoloration due to the protecting surface covering them. They had been used in Florentine pietre dure workshops since the late 18th century and appear on many boxes by Johann Christian Neuber (see lots 15 and 16 in this sale). Not only do pearls fulfill the function of a decorative border in the present box, but they also form the twitching tail of the enamelled leopard, and as such add to the elegance traditionally associated with the feline predator, which in the 20th century was also picked up by jewellers such as Cartier.

The quotations in this footnote are taken from Ian White/Julia Clarke, The Majesty of the Chinese-Market Watch, London, 2019.