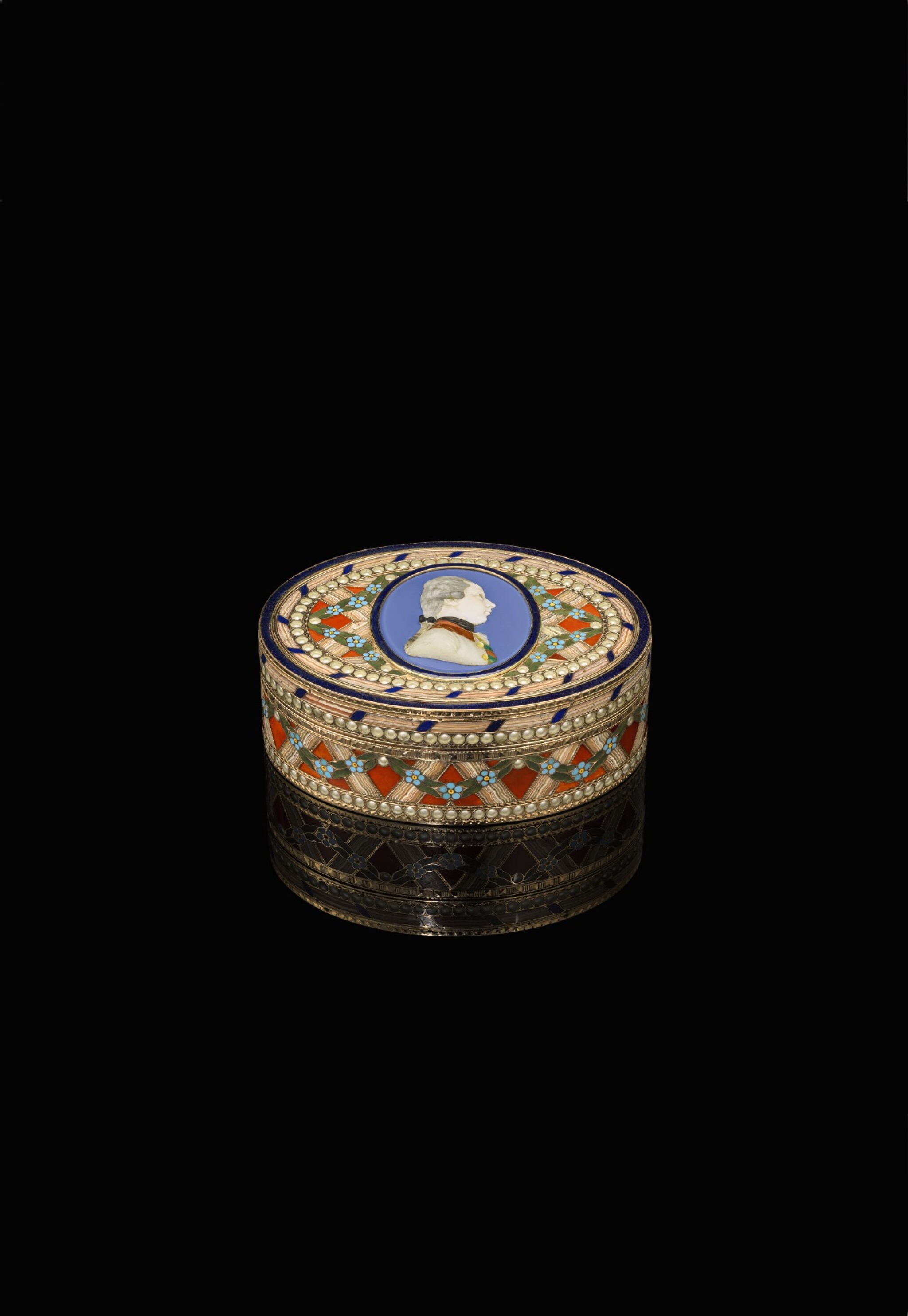 oval, the lid set with an oval powder blue glass medallion applied in relief in coloured hardstones with a profile portrait of Joseph II, Holy Roman Emperor, with hair en queue, wearing uniform with the ribbon of the Hungarian Order of St Stephen, with opalescent buttons, within dark blue enamel frame, the pietra dura ground, sides and base inlaid with chevrons of striped Schlottwitz agate hung with forget-me-not festoons on a bright red carnelian ground, in borders of simulated pearls and lapis lazuli-bound Schlottwitz agate, on the lid, an outer dark blue enamel border resembling lapis lazuli, unmarked

the blue enamel of the border on the lid is semi-matte with an egg-shell like surface, this has presumably been done to imitate the lapis lazuli insets adjacent; short fine crack to agate band to the right of the profile, one agate below probably refitted;

two small agate panels on the side above the hinges with hairline cracks, one with natural flaw to the stone; two agate panels of different colour;

one lapis and one agate panel on the base refitted

Samuel N. Tonkin, the only son of Harry Tonkin and his wife, Sadie (née Bader), was born in Russia around 1903 and emigrated to the United States with his sisters in 1914. Three years later he became a citizen. At the time of his marriage to Martha Felder in Cleveland, Ohio on 28 August 1927, he is described as a salesman by Rabbi. H. Sacks. Mr. Tonkin and his wife formed an impressive collection of 18th century snuff boxes, including examples by Neuber, sold at Sotheby's, London on 3 November 1958. He also assembled a well-known collection of watches, 64 of which were sold at Sotheby's London on 13 November 1967, including a gold and enamel musical watch, circa 1780, in the form of a scent bottle, and a silver-gilt and enamel automaton watch, circa 1780, with moving figures in a kitchen scene with a woman spinning and a dog on a treadmill and turning a spit. Tonkin died on 16 February 1970.