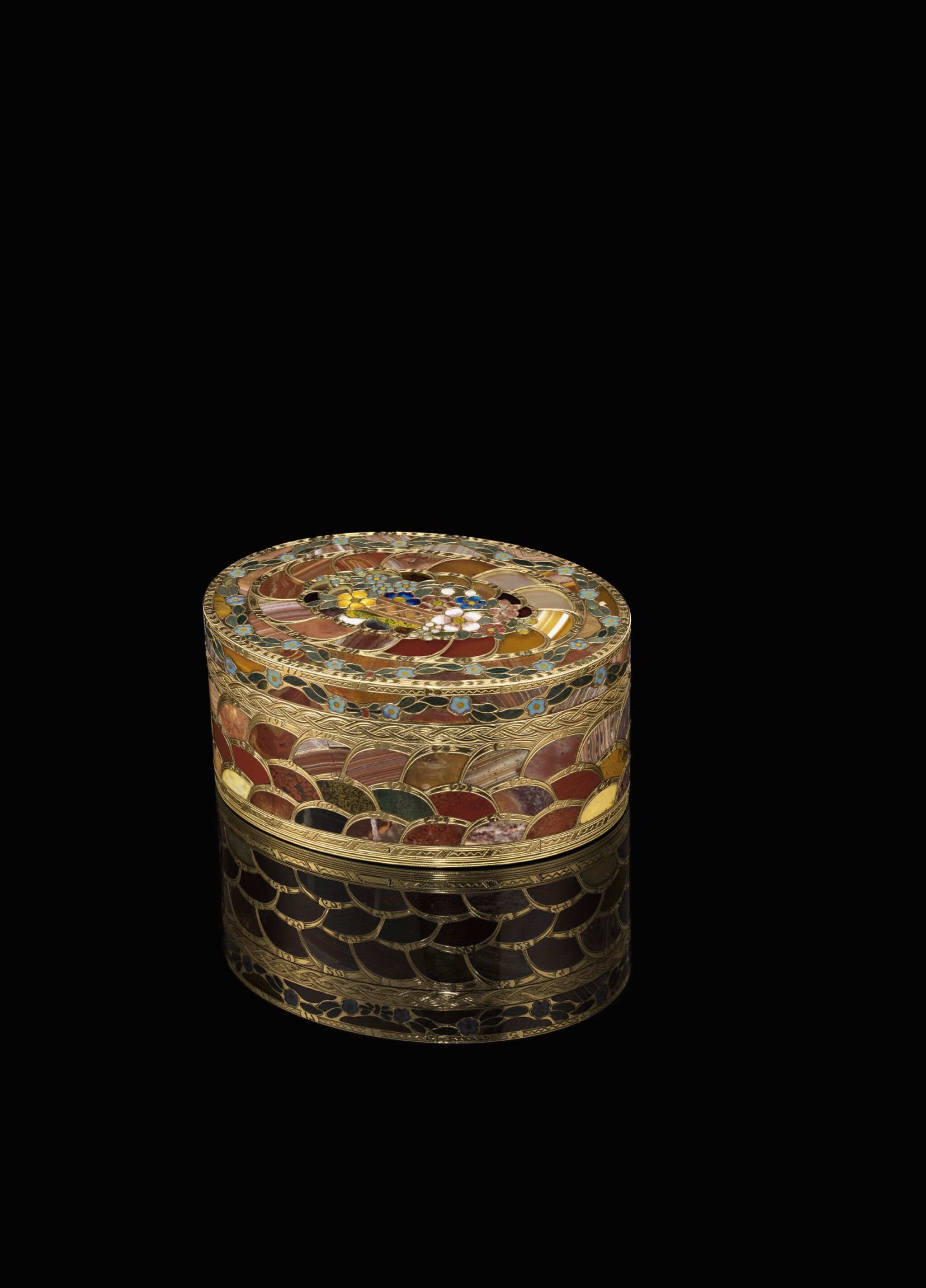 oval, the lid ingeniously inlaid in brightly-coloured hardstones with a central rustic basket overflowing with flowers, the ground, sides and base similarly inlaid with swirling petals of numbered specimen stones within garlanded borders of chalcedony forget-me-nots, the translucent stones and the pierced goldwork on the lid creating an impression of stained glass, the interior of the base opening to reveal a secret compartment containing the printed booklet listing the specimens, in a silk-lined leather case

An incredibly rare and magnificent box in remarkable condition, especially when considering the fragility of the technique.

A few flaws, imperceptible to the naked eye, as follows:

Lid: minuscule hairline crack to leaf above stone no. 1 and panel no. 38;

no. 43 with a scratch only, no. 26 with a natural flaw with potential to opening up;

Alexander Hugh Baring, 4th Baron Ashburton (1835-1889), (fig. 1), belonged to a dynasty of bankers with an enormous passion for the arts, and much like his grandfather, he was one of the most notable collectors of Dutch and Flemish paintings, some of which formerly belonged to Prince Talleyrand. The paintings were divided between his country estate at The Grange, Northington, in Hampshire and Bath House, London, known later as the 'Palazzo di Piccadilly' when the collection was lavishly expanded by his heir, the 2nd Lord Ashburton. The 4th Baron's cousin, the banker and politician Thomas Baring (1799-1873), had also inherited the collecting gene, and was the first member of the family with a recorded interest in gold boxes, having exhibited an impressive group at the Special Loan Exhibition at the South Kensington Museum in 1862 (nos. 4149-4167).

The Christie's 1947 sale of the 4th Baron's gold box collection, put up for sale by his daughter Lilian (1874-1962), widow of Lieutenant-Colonel Frederick Adam, was shared with a further group of gold boxes described as 'From the collection of the 3rd Lord Ashburton, now sold by order of Frances, Lady Ashburton', showing that the 3rd Baron (son of the 1st; brother of the 2nd and father of the 4th Baron) had also been a gold box collector. Interestingly, all three collections included snuff boxes either by, or very probably by Neuber or Stiehl: Thomas Baring had lent three boxes attributable to Neuber to the 1862 Loan Exhibition, the 3rd Baron owned one and the 4th Baron owned three. These comprised of the present Steinkabinett, a magnificent architectural pietra dura gold box by Neuber, sold Sotheby’s Paris, Collection Ribes, 11 December 2019, lot 59, and a signed example decorated with pansies, sold Sotheby's London, 6 July 2010, lot 15.

In the aforementioned sale in July 1947, the present Steinkabinett (fig. 4) found an even more extravagant new owner. The gold-mounted pietra dura box with the secret compartment was acquired by His Majesty Farouk I, King of Egypt and the Sudan between 1936 and 1952. As such, the box was one of the later additions to the most extraordinary and lavish collection of treasures amassed by the Egyptian Royal family over generations. After the military overthrow of King Farouk (1920-1965) in 1952 during the Egyptian Revolution, the collection was sold in 1954 in what was one of the most prestigious sales of the 20th century. Presented by Sotheby’s in Cairo, 1261 ‘Works of Art in Precious Metal’ (fig. 3), among them 18th and 19th century musical, automaton or hardstone gold boxes, including two Frederick the Great boxes, as well as the rarest pocket watches, jewellery and Fabergé, were sold in the Koubbeh Palace (fig. 2) over the course of eight days in March 1954.