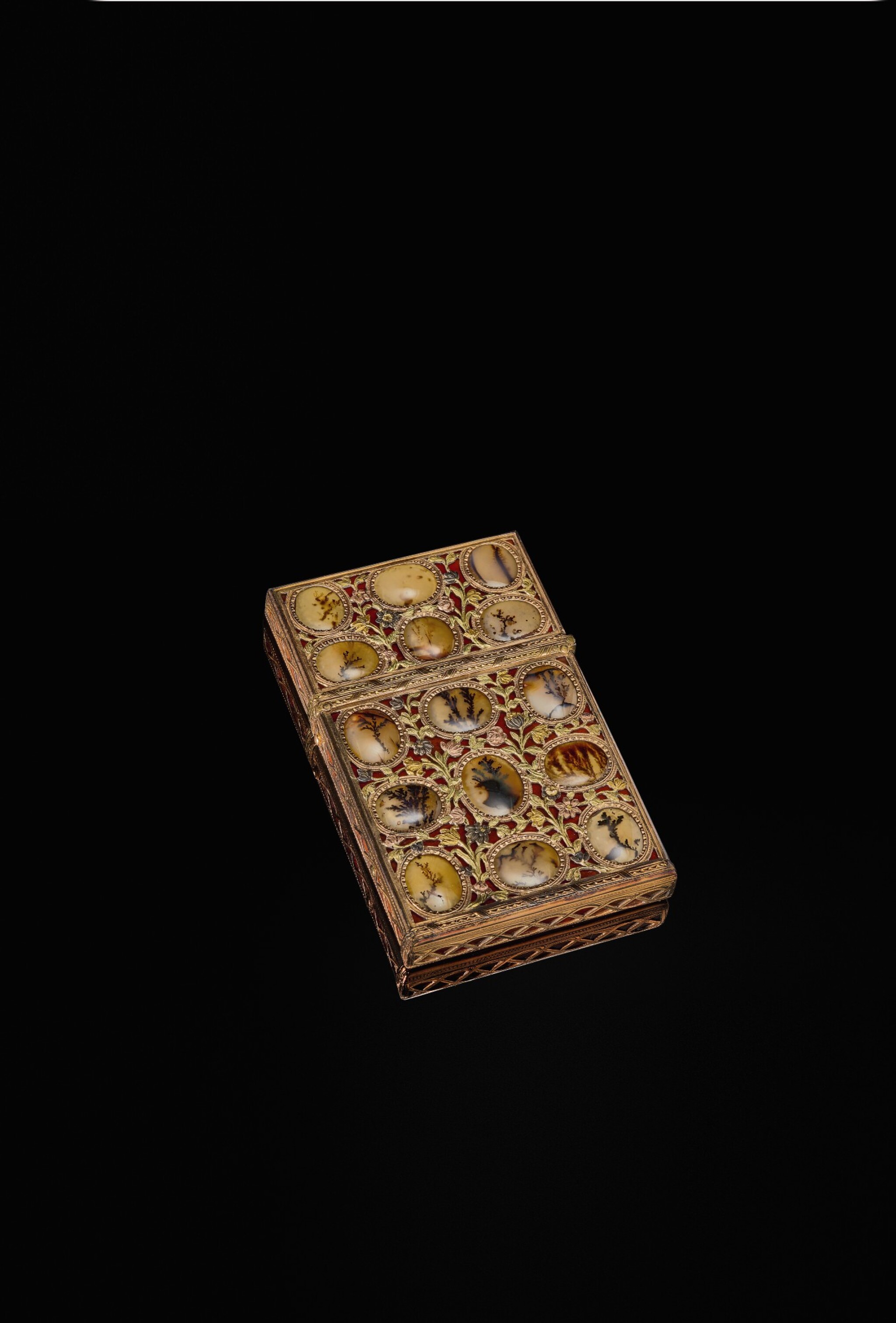 of upright rectangular form, composed of oval dendritic agate panels set on a ground of carnelian with airy coloured gold floral cagework mounts, the front lid enclosing the word: SOUVENIR, on a lapis lazuli ground, the interior containing ivory memorandum slips and gold-topped pencil, the base extending when a secret slide is pressed to reveal the space for a miniature portrait, in modern case stamped for Wartski,

In very good condition; one small panel on the underside with a fine hairline crack only

This lot contains ivory. Due to recent changes in the laws of many countries (e.g. US, France) Sotheby's recommends that buyers check with their own government regarding any importation requirements prior to placing a bid. Please note that Sotheby's will not assist buyers with CITES licence applications where a buyer elects to either collect or arrange their own shipping, nor will Sotheby's assist with the international movement of ivory by air, either as freight or through hand carry. Sotheby's shipping will only assist in shipping the lot to either domestic UK or EU destinations, where delivery is made by road transport. A buyer's inability to export or import these lots cannot justify a delay in payment or sale cancellation.
Collection of Alfred Hill, deceased, sale, Sotheby's, 7 May 1942, lot 79, illustrated frontispiece (£52 to Jacobsen);
collection of A.E.H. Digby Esq., sale, Sotheby's 21 June 1951, lot 145 (£220 to Backer);
collection of Felix Kramarsky, sale, Parke Bernet, 9 January 1959, lot 745

Almarus Edward Henry Digby (1889 – 1950) was the eldest son of the Hon. Everard Charles Digby (1852-1915) and Lady Emily Louisa Anne (1886-1939), daughter of Henry Petty-Fitzmaurice, 4th Marquess of Lansdowne. He died unmarried. During the First World War he served as a Second Lieutenant in the Royal Marines.

Felix Kramarsky, one of the children of Berko Abeliowitsch Kramarsky and his wife, Sophie (née Horwitz), was born at Lübeck, Germany, on 18 February 1891. He and his wife, Gutta (née Nachamson) lived in Hamburg during the 1920s, when he was described as a merchant. By 1941 they had moved to the United States where Kramarsky established Felix Kramarsky Inc., at Broadway and 29th Street, Manhattan, as importers and exporters of nonferrous metals and ores. The success of his business enabled him to amass a notable collection of art works, including silver and other treasures from the 16th, 17th and 18th centuries; Chinese porcelain and pottery, jades and bronzes, as well as a number of high quality gold boxes. Much of this was sold in London and New York between 1958 and 1959, when eleven snuff boxes by Johann Christian Neuber found new owners.
The other important sale in the 1950s of gold-mounted German hardstone boxes was, of course, Sotheby's sale of the Palace Collections of Egypt in Cairo in 1954 (see lot 12).

A. Kenneth Snowman, Eighteenth Century Gold Boxes of Europe, Woodbridge, 1990, pls. 677 and 680;
Alexis Kugel, Gold, Jasper and Carnelian, Johann Christian Neuber at the Saxon Court, London, 2012, no. 194, p. 370 and p. 208
As Kenneth Snowman suggested, it is probable that this etui was made en suite with a gold box decorated in very similar fashion which he also illustrates and on which he found Neuber's signature inscribed twice on the interior when dismantled. According to Alexis Kugel, the present etui is also engraved: Neuber à Dresde on the interior of the lining but this remains to be verified.