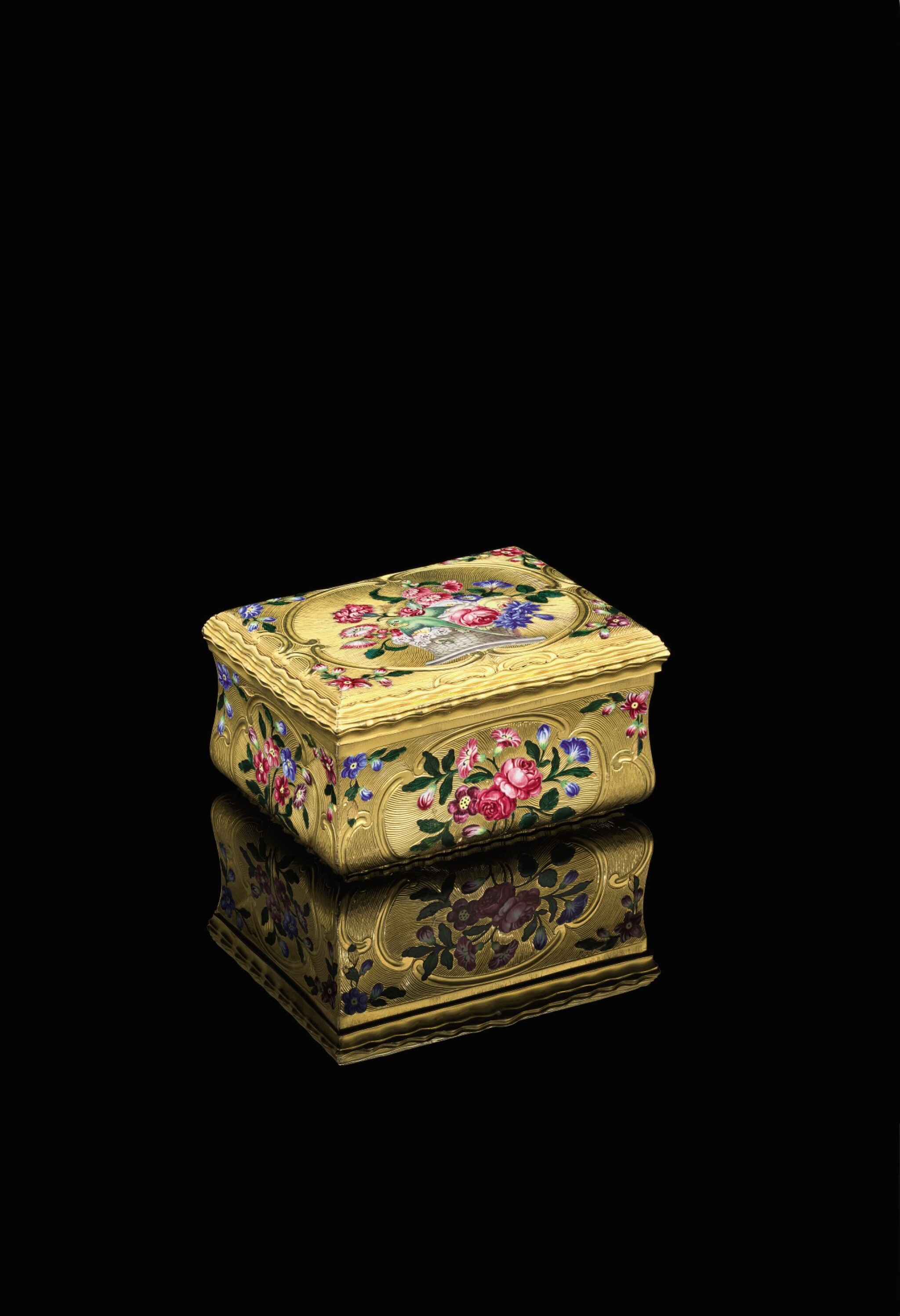 rectangular, the lid and slightly waisted sides joyfully painted in polychrome enamels, the lid with a green parakeet perched on a basket of sumptuous summer flowers, the sides with further colourful bouquets, all within scrolls on a finely-reeded ground, the bouquet on the base tied with a flowing blue bow, wavy cagework mounts and footrim, signed on the left rim: Jas. Bellis Londn. fecit, later French control marks

some minor losses and restoration to enamel, a small gap near the hinge at the base of lid; hinges would benefit from adjusting as the lid does currently not shut 100 percent

James Bellis, the maker of this box, has caused a plethora of scholarly speculations as to the extent to which he was a manufacturing goldsmith/goldworker or a retailer. Born in 1721, Bellis was the son of Samuel, a vicar of Ashton-on-Mersey, near Manchester. He called himself a jeweller and toyman (the 18th century equivalent of a retailer of luxury goods) but he had also officially entered his mark at Goldsmiths' Hall in 1760. Several objects of vertu supplied by Bellis at the beginning of his career had soon found their way into the luxurious and curious display of Bertrand’s toyshop in Bath, as an entry for £18 in 1746 states (Vanessa Brett, Bertrand’s Toyshop in Bath, Luxury Retailing 1685-1765, 2014, p. 214). This ‘toyshop’, offered luxurious, rare and curious small objects (‘toys’) to the wealthy clientele visiting Bath, which at the time was considered the most fashionable and famous of the British spa towns. It attracted aristocrats and artists alike during the first half of the 18th century, among them Thomas Gainsborough (1727–1788). Paul Bertrand and his second wife Mary Deards ran this luxury retail shop that also operated as a bank between 1730 and 1747.

Bellis’s own premises in King Street, Covent Garden, were largely destroyed in a fire which consumed 30 or 40 houses and killed several firefighters on December 1759. In January 1760, James tried to recover some of his missing goods. Through notices in The Public Advertiser he offered to ‘handsomely reward for their Trouble’ anyone who recovers any of his collection of ‘sundry Toys, as Smelling Bottles, Snuff-boxes and other Trinkets’. Although this demonstrates that James Bellis was clearly a wealthy and successful retailer who later moved to spacious premises in Pall Mall, it is extremely rare to see his signature on a gold and enamel snuff box, as on the present lot. For another snuff box of somewhat comparable design and construction, see Sotheby’s Paris, Collection Ribes I, 11 December 2019, lot 50. It is possible that the maker’s mark IB in a butterfly on the aforementioned gold and enamel box is a variation of the butterfly-shaped mark that the enigmatic jeweller had entered in May 1760 (Brett, p. 214), however Bellis’s signature on the present lot will eliminate any doubts about his talents.