B enjamin Steinitz's collection, comprising furniture and decorative arts of past centuries along with modern and contemporary works, reflects his wide curiosity and his capacity to bring together different influences into a remarkable harmony. Having passed in many cases through the hands of illustrious owners, these works are both witnesses of the past and keepers of a great artistic transmission. Read on to discover a selection of beautiful interiors with comments by Benjamin Steinitz.

Benjamin Steinitz: “Finding delight in bringing together different cultures and eras through works of art ... This is a motto which I hope will come to mind among those who have known us. A difficult task, yet so jubilant when it is achieved!

The commode, with blonde and amaranth wood veneering, is stamped by Besnard, a famous Parisian cabinetmaker during the first quarter of the 19th century. It perfectly illustrates the influence of English furniture onto French creations of that time. It was produced for Mademoiselle Mars, a distinguished actress during the French Empire, which explains the presence of gilt bronze masks symbolizing different theatrical aspects that accent the upper section.

At the beginning of the 20th century, the commode became the property of the prominent Jansen company, a French interior design firm which included the largest fortunes of their era among its clientele. In particular, they remain renowned for having decorated the White House under Jacqueline Kennedy’s supervision. The commode was sold in the 1930s to the newspaper tycoon William Randolph Hearst and is reproduced in his collection catalogue in 1939. William Randolph Hearst was famous not only for his extraordinary career, but also for having been Orson Wells’ inspiration for the main character in his acclaimed film “Citizen Kane”.

The artwork hanging above the commode is a unique item and is one of the first works by photographer Paul Steinitz, my brother. I am very attached to it, and it personally represents a whole period of my life. It is titled “Léna” and was realized in New York circa 1988. At the time we lived in New York and my brother had started the “Prisunic Gallery”, located in the middle of the Meatpacking District. Over the years, we had exhibited many artists including Harland Miller. One of his paintings will be presented during this auction and he is currently showing at the White Cube Gallery in London.

The transition between the two works is ensured by a spectacular Japanese patinated bronze dragon from the Meiji period. Due to its presence, the commode becomes a sculpture, as well as modern by the influence of the photograph mounted onto canvas.

The pair of gilt bronze wall lights from the Louis XVI period on either side of the canvas adds a slight Neoclassical touch to the ensemble. Quite a success, in my opinion ...”

BS: “In the background, the enamelled vase by famous Barcelona architect Antoni Gaudí overlooks the spectacular Italian carved giltwood armchair with seahorses who appear to be guarded by the “musical” bulldog. Along the vanishing line one catches a glimpse of the neoclassical desk stamped Montigny that comes from the Rothschild collections at the Hôtel de Marigny where it appears in a watercolour by Seribriakov.”

BS: “A three-quarter view of an Empire period armchair whose shape is reminiscent of some of those to be found in the paintings of Jacques-Louis David. In front of the fireplace are a pair of armchairs by Adnet. A pair of 15th century Chinese paintings hang on either side of a large mirror by Viardot from the collection of Robert de Rothschild. A beautifully carved profile in marble sits in the center of the mantel, flanked on each side by 18th century Chinese stoneware ducks mounted on Louis XVI gilt bronze bases.”

BS: “A gorgon by Caroline Smit flourishes atop a magnificently inlaid Italian table dating from around 1860 and attributed to Giovanni Batista Gatti.”

BS: “A sculpture by Alfred Janniot sits on top of a gilt bronze pedestal table dating from around 1800. A carpet, "the decomposed body" by Nicola L dated around 1967, can be seen through the doorway.”

BS: "I like this image, its atmosphere, generated among other aspects by the energy that emerges from the interchanging with different works.

The sculpture of the elephant "Hanno" personally has been representative of my ultimately endearing and moving discoveries.

In fact, "Hanno" was one of the most famous elephants in history.

It was offered by King Manuel I of Portugal to Pope Leon X, born Giovanni di Lorenzo de' Medici, for his coronation. Hanno arrived in Rome in 1514 and it became not only the Pope's favorite animal, but also the darling of the Romans. This artifact, with a spark in its eye and a touching rendition where one can appreciate each fold on its hide, has stood the test of time in a remarkable way. It has always been conserved with the greatest care and is still adorned today with its original leather harness bearing its inscribed name. For me, it was one of the main elements which allowed me to bestow onto the room its originality and I had a great deal of joy “composing” around it. In particular, by “placing” it on a wonderful “Agra” carpet from India and dating from the beginning of the nineteenth century with soft pastel colors, or by crowning it with a fine toiletry mirror from the Roman era.” 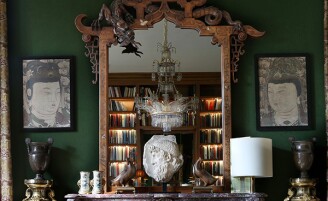