T he search for the unique and extraordinary has been a constant in the history of patronage and collecting and, after ten editions of the prestigious Treasures sale, we continue to focus on quality and rarity within the fields of Furniture, Decorative Arts, Sculpture and Works of Art. On 10th December, we will once again present an exciting array of pieces, from a rare Renaissance bronze by van Tetrode to sublime Kunstkammer works of art such as an exquisite Nuremberg silver bear, or a silver-gilt mounted ostrich egg from Torgau. The sale also encompasses delicate porcelain from the Sèvres and Meissen factories and a towering Dutch tulipière. A magnificent jewelled varicolour gold and enamel snuff box, by Daniel Baudesson, treats those looking for a gem, whilst more traditional furniture is represented by a rare pair of George III alabaster urns on pedestals, a Regency bookcase from Devonshire House and a monumental English gilt-mounted ebony musical automaton clock made for the Chinese market. For those looking for the truly unique there is an Hawaiian feather cape reputedly given to Captain Cook, historical Nelson related objects and a highly important and rare Fabergé varicolored gold-mounted nephrite desk set formerly in the collection of the King of Egypt.

The three outstanding sculptures in Treasures XI are all inspired by venerated models. The magnificence of sculpture from ancient Greece and Rome has influenced every generation of artists since the Renaissance. Willem van Tetrode (lot 8) interprets the Trojan theme of one the greatest Roman marbles from the fabled Farnese collection and aspires to make the composition even more dramatic by exaggerating the group’s forward movement and omitting the support needed for the monumental marble. The sculptor of the bronze Laocoön (lot 14) has remained faithful to the original antique model today in the Vatican, yet he could not resist embellishing the base with elegant foliage. Even during his lifetime Michelangelo was known as Il Divino (the Divine One) and his influence rivalled that of antiquity. The handsome bust of a man (lot 4) attributed to the Florentine sculptor, Battista Lorenzi, is a homage to Michelangelo’s famous Bust of Brutus, but his identity remains a mystery.

The 17th and 18th Centuries witnessed a greatly increased European interest in all things Oriental. The import of goods such as tea, silks and porcelain from China grew rapidly, but it was a one-way trade, with the Chinese merchants showing little interest in English commodities. The East India Company found that trading conditions were never easy and it was often essential to present lavish gifts in order to facilitate deals. High quality novelty clocks and watches made in London proved popular gifts and, as these filtered into the upper echelons of Chinese society, demand for 'sing-songs', as they became known, increased. Dr Ian White in his book English Clocks for the Eastern Markets, 2012, explains in detail about the growth in this trade and collecting in China.

The two rare clocks presented are both remarkable and spectacular. Lot 21 is one of a pair of clocks made in England for export to China during the last quarter of the 18th century, with the pair to this clock now in the collection of the York Museum's Trust and currently on display in the Burton Gallery of York Art Gallery. Lot 31 features a very interesting world time dial surrounding the double-twelve hour time dial. The multiple subsidiary dial layout of the main dial seems to be a feature of larger clocks made for the Chinese market and the large and plain enamel rear time dial is an unusual addition. World time dials are rare in 18th century English clockmaking and are usually only found on complicated longcase clocks, perhaps commissioned by traders or ship owners. The inclusion of a world time dial in this clock would have provided an added tier of fascination and kudos for its first owner.

Objects of vertu like gold or porcelain snuff boxes are fascinating works of art which offer a wonderful combination of beauty, adornment and utility. Characterised by their inventiveness, these jewel-like pieces were produced by talented bijoutiers, or craftmen in the main centres of production all over Europe, among them Paris, Berlin, Geneva and Meissen. Initially designed to provide a beautiful tight-fitting portable container for the very fashionable 18th century commodity, snuff, these boxes surpassed their functionality and ultimately became symbols of status, luxury and intellectual connoisseurship alike. Of superb quality in gold chasing or engraving, enameling or painting on porcelain, they often served as diplomatic gifts. Presented in this year’s Treasures sale are two very different yet extremely high quality pieces from a distinguished European private collection.
Lot 18 is an impressive and very rare gold box by the Huguenot goldsmith Daniel Baudesson (active 1739-1780), who was commissioned by Frederick II, King of Prussia, to produce ‘tabatieres or de couleur enrichie de brilliants’ and other objects of vertu that served as additions to the King’s extensive collection of magnificent gold boxes that he kept instead of crown jewels. The present lot belongs to a very small group of gold boxes marked by Baudesson, and most of these are in the possession of important museum collections such as the musée du Louvre, the Metropolitan Museum and the Victoria & Albert Museum. Currently, fewer than ten gold boxes with the marks or signature of Baudesson are known, and this rarity is combined with opulent chasing of the four-coloured gold, the seemingly bold contrast of a dark blue Greek enamel key border and a richly jewelled thumbpiece, but most importantly the painted pale pink and grisaille enamel panels of finest quality, attributed to Jean-Guillaume Krüger, another ingenious artist based in Berlin and working for Frederick the Great in the mid-18th century.

Lot 16 is the exquisite Meissen gold-mounted snuff box, painted with topographical views including Dresden across the River Elba and Warsaw. Each view is after an engraving including the impressive cityscape to the cover after Bellotto. Several important Saxon noble residences are represented including the Jagdschloss Mortizburg and the Wasserpalais Pillnitz. These views are beautifully painted on each face of the box and to the interior of the cover. Established in 1710 under the protection of Augustus the Strong, the factory at Meissen near Dresden was the first European factory to discover the long sought after recipe for hard paste or true porcelain, a secret which, up until then, was only known in the Far East.

The sale includes three articles inextricably tied to arguably Britain’s greatest hero; Vice-Admiral Horatio Nelson, 1st Viscount Nelson, 1st Duke of Bronté, KB (1758–1805). Two swords – one believed to be carried by Nelson as a Captain (lot 25), the other commemorating perhaps his most audacious victory at the Battle of the Nile (lot 26) – speak of his inspirational leadership, unwavering bravery and tactical prowess.

However, as with so many heroes, it was the death of Admiral Nelson in the heat of the Battle of Trafalgar in 1805 that cemented his legacy. When George III heard the news of Nelson’s death he is reported to have said, through tears, 'We have lost more than we have gained'. A painted silk hatchment from the State Funeral Carriage (lot 27), emblazoned with the arms of Lord and Lady Nelson, serves as a poignant reminder of this national tragedy.

The wonders of the ancient world had a profound impact on English designers of the late 18th and early 19th century, with archeological discoveries and extensive Grand Tours fueling imaginations. Treasures XI includes two staggering examples of this combining antique form with native stones sourced from the rich geological deposits found in Derbyshire.

The mottled alabaster urns and pedestals (lot 24), possibly to a design by Sir Robert Smirke (1780-1867), owe a great debt to the etchings of Giovanni Battista Piranesi (1720-1778) who featured countless examples of antiquities collected by British patrons in his celebrated Vasi, Candelabri e Cippi (1778). The shape of the jewel-like blue-john vases (Lot 29), and in particular the handles, derive from Greek krater-form ceramics. Designed by the great progenitor of the Regency style, Thomas Hope (1769-1831), they formed part of his era defining collection at Duchess Street. The finely figured and richly coloured blue-john is enhanced with exquisite ormolu mounts almost certainly by the French émigré bronzier Alexis Decaix resulting in a true treasure of English design. 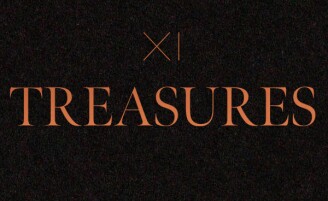