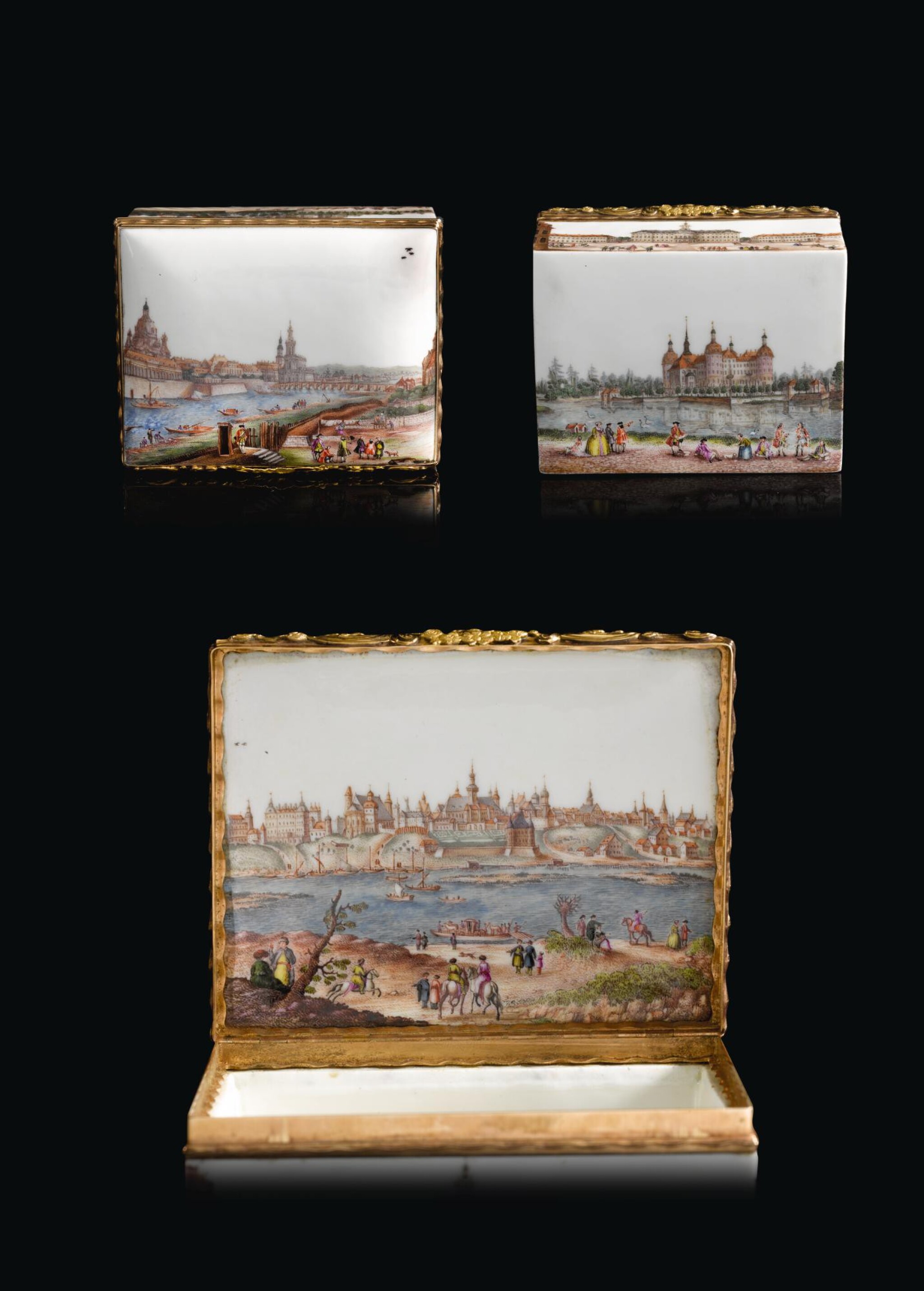 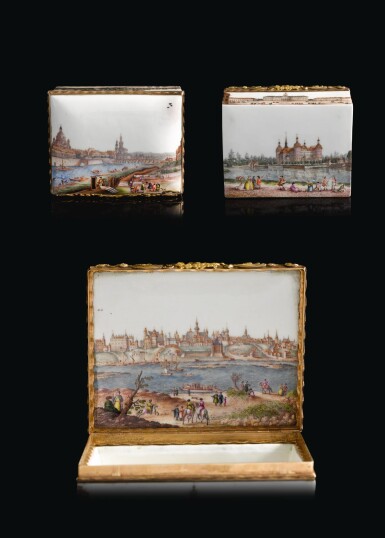 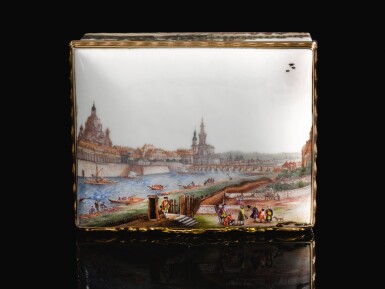 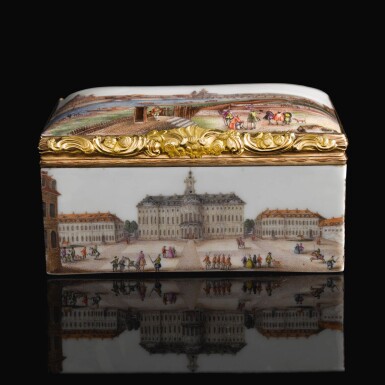 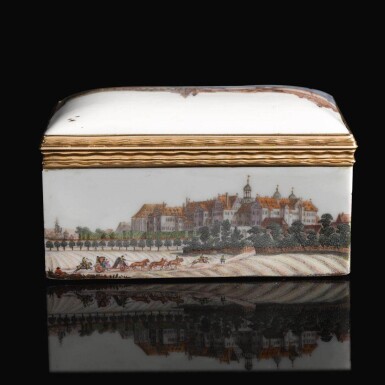 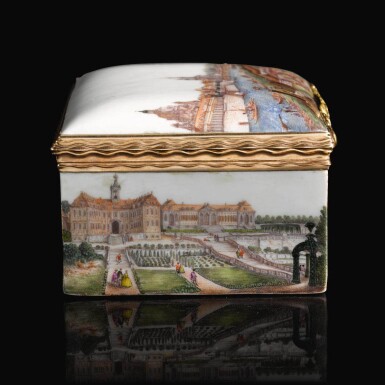 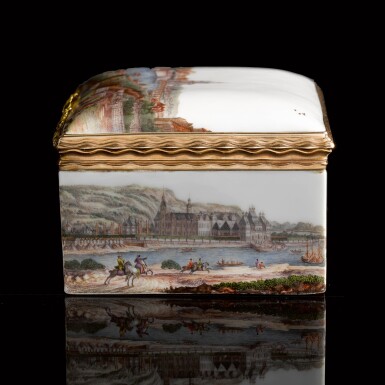 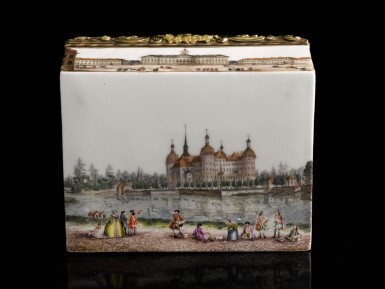 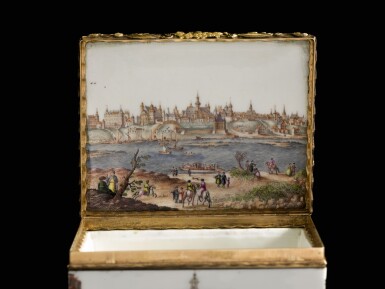 rectangular, the cover painted with a view of Dresden of the right bank of the Elba after Bellotto, the sides with further views of the territories of Augustus III in Saxony, the interior of the cover with a view of Warsaw across the Vistula, the base painted with Schloss Moritzburg, with wavy two-colour gold mounts, the elaborate gold thumbpiece chased with flowers and scrollwork

Generally in good order with no damages or restorations. This is a beautifully decorated box painted in incredible detail. This report will catalogue any minute defect, wear and tear and firing flaw visible in detail. Notwithstanding these observations this box only has the very minor flaws which one might expect from an item of this period.

In detail: the upper surface of the cover has a very minor scratch in the foliage above the three figures on a scaffold behind the main cluster of figures in the foreground. There is also a minute light scratch to the water below the boat in the centre of the composition. The white glazed section with the sky has a few imperceptible glaze scratches. There is a minute flake to the dark enamel on the second step below the sentry box. There are three minute frits to the decoration on the lower left of the composition. The enamel to the lower left corner is slightly warn to the very edge. The interior of the cover, as one might expect, has no scratches or wear, the upper left and right corners have a slightly uneven finish but this is part of its manufacture rather than a defect.

The base of the box, as one might expect the image of Moritzburg Castle to the underside has sustained some wear to the points in the corners where the box sits. There patches of small scratches are most noticeable to the group of figures to the lower right of the composit9ion, in particular the two gentlemen in conversation wearing red coats, the seated figure on the far left hand side has similar slight wear but is less noticeable as is a small patch of wear to the foliage on the far shore on the left hand side. The corner edges to the lower part have slight wear and there are two small patches of scratches in the white sky to the upper left and right which have a little dirt over the years. The sharp corners of the base of the box have slight wear to the enamels along the edge as is typical of these sorts of item. The mount on the upper front left corner has lifted by approximately 0.5 mm revealing a slight step to the edge of the box, there is an associated glaze flake or slight wear which is visible to the roof of the building just below. An attempt to correct this slight separation appears to have been made in the past which as led to a tiny amount of glue residue to the upper edge along the left hand end panel. No other areas or wear to the exterior appear, the outlines black enamels are slightly uneven, these are such fine details that could either be the paint not taking during decoration or a slight slipping of the decoration during firing, it is most apparent to the figures in the foreground of the scene on the wide panel on the front of the box, again I would not count this as wear but a trait of the manufacture. The plain interior of the box is in good order but there are some glaze flakes along the edges which has discoloured slightly, most notable to the front inner edge just below the mount, there are a few scattered glaze flaws and a minute spot of green enamel to the upper back left edge of the interior.

The view of Dresden across the Elbe is after an engraving by Bellotto (1) showing Dresden from the Right Bank of the Elbe above the Augustus Bridge. The engraving copies Bellotto’s first view of Dresden completed in 1747 and takes in the dome of the Frauenkirche above Count Brühl’s art gallery, Dresden Castle and the Augustusbrücke. The view is taken from Councillor Hoffmann’s garden whose wife, Felicità Sartori, a painter and miniaturist who may have been known to Bellotto from their native Venice. The significance of the original work is underlined by the inclusion but the artist’s self-portrait in the foreground of the painting, seated, in conversation with two identified as the painters Christian Wilhelm Ernst Dietrich and Johann Alexander Thiele, the former was inspector of the Royal Gallery and the later a veduista whom Bellotto would succeed. The other group of three figures includes two identified as the courtier’s Filippo di Violante, the court physician and the castrato Nicolò Pozzi, known as Niccolini.

The interior of the cover is painted with a view of Warsaw from Praga across the River Vistula (2) thereby demonstrating the importance of both cities to the Electors of Saxony as Kings of Poland-Lithuania. The panorama is based on drawings by the military engineer and commander Erik Dahlberg and shows Warsaw as it was in circa 1656, a significant date in the Swedish Deluge. Following the occupation of Warsaw by Swedish forces, the Battle of Warsaw took place between the forces of the Polish-Lithuanian crown attempting to re-capture the city from Sweden and Brandenburg under Karl X Gustav of Sweden and Friedrich Wilhelm, Elector of Brandenburg and Duke of Prussia. The painter of the present snuffbox represents a section of the panorama which takes in a number of Royal and noble residences as well as churches and monasteries. It is worth noting that the view begins on the left with the Ossoliński Palace, later known as Sandomierski Palace. By the middle of the 18th century the palace was bought by Count Brühl and remodelled by Johann Friedrich Knöbel and Joachim Daniel von Jauch.

The underside of the box is painted with the distinctive towers of Schloß Moritzburg, a Renaissance hunting lodge, set in park wetlands, was latterly remodelled by Pöppelmann and Longuelune for Augustus the Strong with relatively few changes to the exterior of the buildings since. The graphic source for this scene has not yet been identified. The sides of the box are painted with further scenes, the left side with the equestrian steps and Upper Orangerie at Friedrichsschlösschen at Gross-Sedlitz. The front of the box is painted with Hubertusberg, designed by J.C. Neumann in 1727 and enlarged by Christopher Köffel between 1743 and 1752. The right-hand panel is painted with Pillnitz, a lustschloss or Summer pleasure palace on the banks of the River Elbe, after an engraving by J. A. Thiele, 1726. The scene to the back of the box appears to be a view of Schloss Lichtenburg and this is born out when compared to Merian’s view of Prettin and Schloss Lichtenburg (3).

Apart from the present snuffbox, several other related topographical boxes are recorded in the literature. The examples in the Dr. Fritz Mannheimer collection, Rijksmuseum, Amsterdam and from the Helmut Joseph Collection, sold Bonhams, London, 5th July 2011, lot 16, both have scenes of Dresden after Bellotto to the cover and the same scenes painted to the exterior of the box and interior of the cover.  The interiors of the boxes are painted in purple monochrome with the monogram AR reserved against a lozenge-patterned ground. Two further similar examples without the monogram to the interior are in state collections, one in the Kunstindustrimuseet, Copenhagen, the other in the Staatliche Kunstsammlungen, Dresden (inv. no. P.E.1827).  Another example was sold in these Rooms, 3rd December 1962, lot 119.  This example with underglaze-blue decoration, formerly in the Sir Alfred Chester Beatty Collection (5), it thought to be the example given by Maria Josepha of Saxony to her son, Prince Xavier.