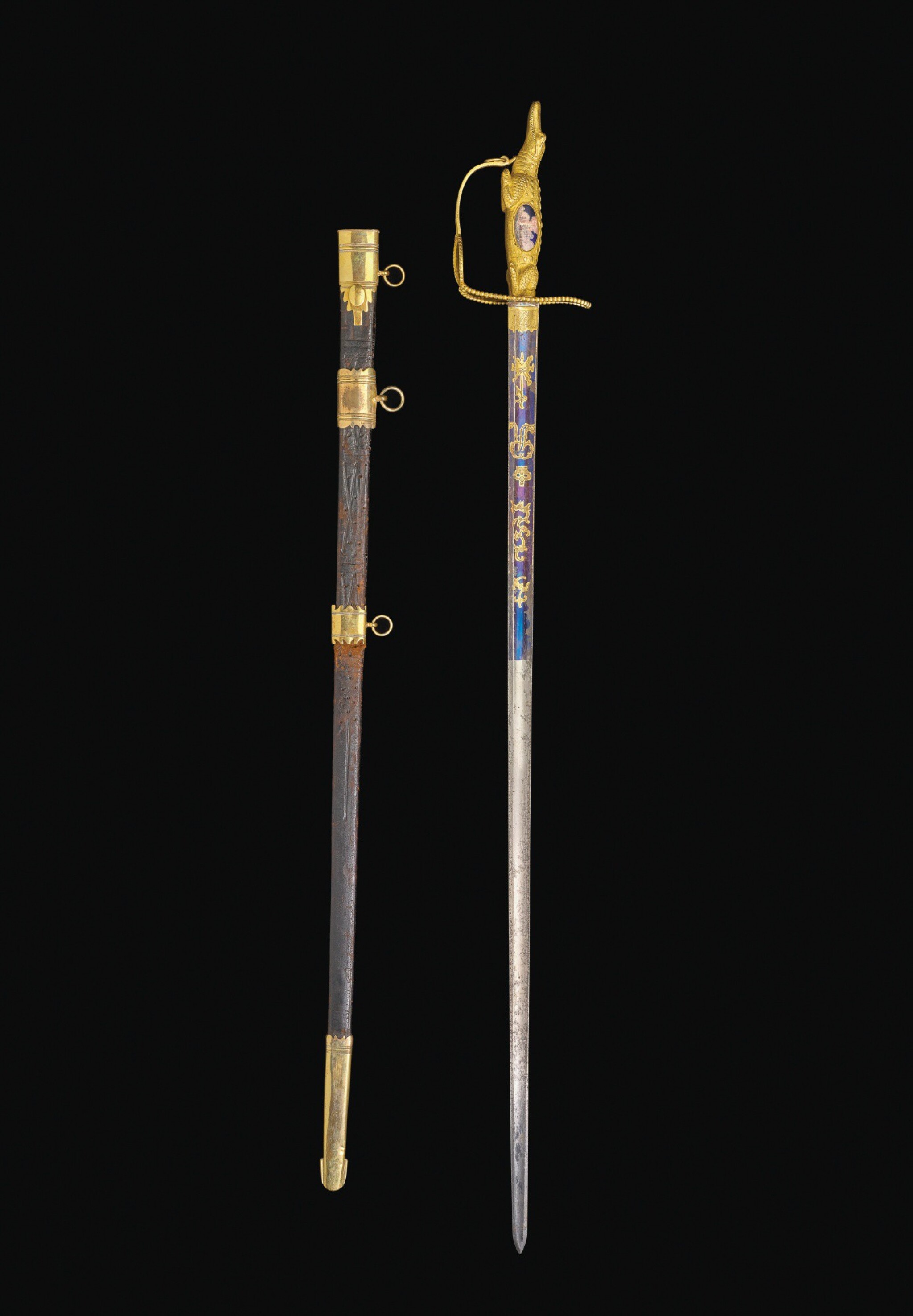 with regulation blade etched and gilt with the Royal arms, crowned Royal cypher and foliage on a blued panel over the lower half and signed by the cutler: J.J. Runkel Solingen on the back edge, gilt-brass hilt comprising beaded oval guard, knuckle-guard incorporating a laurel oval at the base, grip cast and chased in the round as a crocodile, a finely painted polychrome enamel plaque probably by Morisset & Lukin of 22 Denmark Street illustrating the exploding magazine of the French flagship L'Orient inset on one side, and with a further oval plaque inscribed Victory of the Nile 1st August 1798 in gold letters on an enamelled blue ground inset on the reversed side, the second plaque extensively chipped, the knuckle-guard with one small crack, in its original tooled leather scabbard, torn in the middle, with gilt-brass mounts including two middle-bands, and the locket signed 'Rundell & Bridge', Jewellers to their Majesties, Ludgate Hill

The oval element to hand guard deliberately removed. One oval panel to grip with deliberately defaced inscription and damage, the other enamel panel depicting the battle in good condition. Indentations to underside of guard. Some minor tarnishing, rust and loss of bluing to blade. Scabbard in fair condition with scuffs and scratches to leather and one break to leather just below lower suspicion ring. Generally with old marks and scratches consistent with age.

Sotheby's London, S/O Emma, 21 October 2002, lot 13
Two days after the battle of the Nile, on the night of 3rd August 1798, the Captains of the fleet met on board the Orion, and inaugurated the 'Egyptian Club'. A document was drawn up, and signed by all present, inviting Sir Horatio Nelson to accept the gift of a sword and to have his portrait painted for the club. Nelson's gold sword was ordered through Rundell & Bridge. There was a rumour in London that the eyes of the crocodile were to be of diamonds and the scales of amethysts, emeralds and other precious jewels but this proved unfounded. Nelson's 'Egyptian Club' sword was sold at Christies on 12th July 1895 from the collection of Lord Bridport for £1,080. It was stolen from Greenwich Hospital in 1900 and never recovered. Little more is known of the 'Egyptian Club' who never seem to have met. The promised portrait was never completed although there was a story that a Neapolitan artist was invited to breakfast with the Captains but felt unworthy of the commission. Nelson's own sword was distinguished by an enamel plaque set into each side of the grip, one showing Lord Nelson's arms and that on the reverse allegorical figures representing Britannia and Africa. On the guard was an enamel plaque representing the Battle of the Nile and a list of the captains who served: Captain Sir F. Berry, Vanguard; Captain T. Trowbridge, Cullodon; Captain R.W. Miller, Theseus; Captain A.J. Ball, Alexander; Captain Thomas Lewis, Minotaur; Captain Sir T.B. Thompson; Leander; Captain B. Hallowel, Swiftsure; Captain David Gould, Audacious; Captain John Peyton, Defence; Captain S. Hood, Zealous; Captain James Saumarez, Orion; Captain Thomas Foley, Goliath; Captain G.B. Westcott; Majestic; Captain H.D.E. Darby, Bellerophon; Captain S.M. Hardy, Mutine. Captain Westcott had been killed at the action.

Another sword by Rundell & Bridge with a similar blade and near-identical hilt inlaid with enamelled plaques is preserved in the National Maritime Museum. A further two swords with blades of light cavalry type and crocodile hilts of similar form (with engraved brass plaques in place of the enamels). including Davidson's own are also preserved in the National Maritime Museum. A related sword of lesser quality with a differently modelled bronze crocodile hilt that belonged to Captain John Cuthbert of the Majestic was sold by Sotheby's. 13 May 1975.