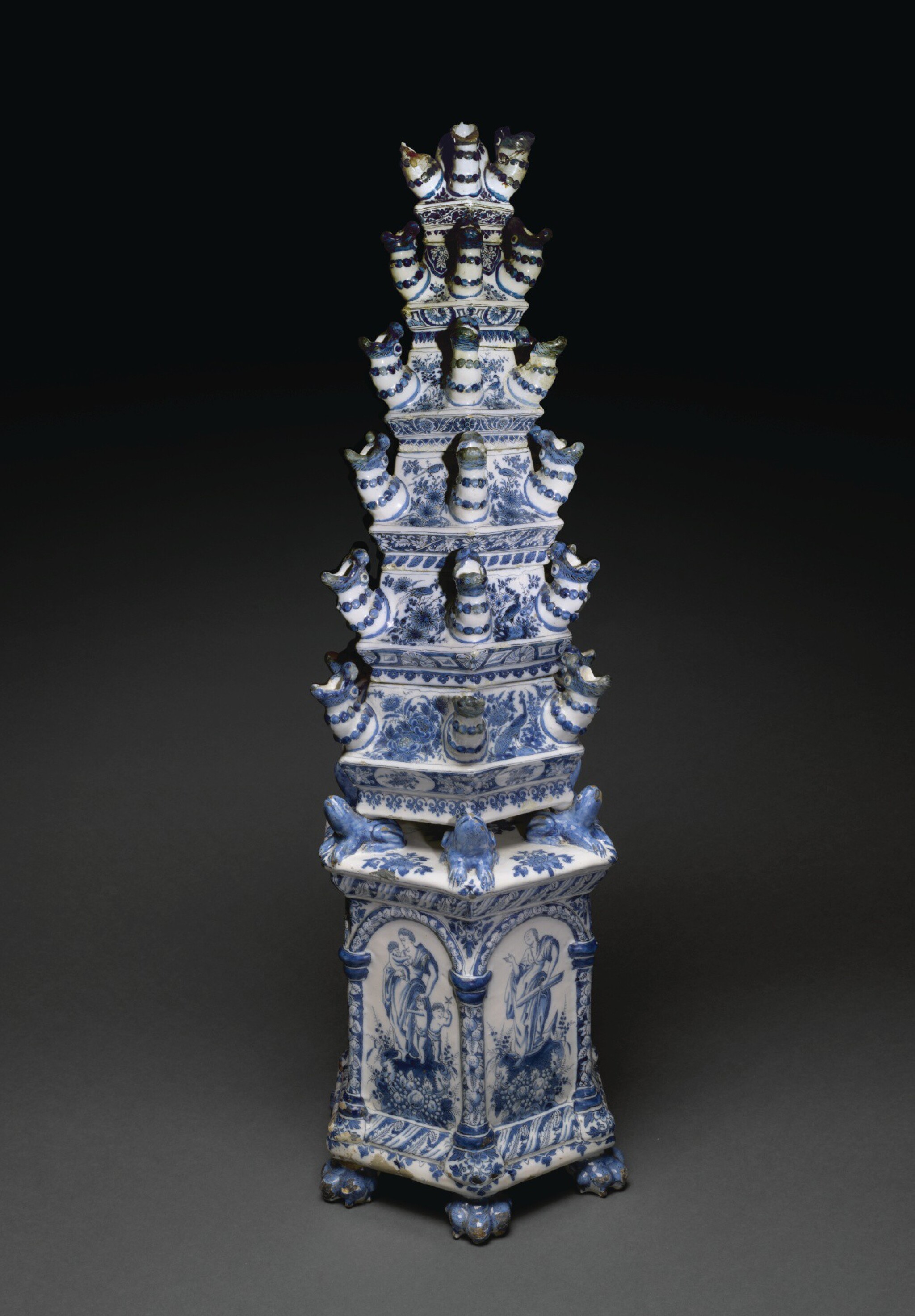 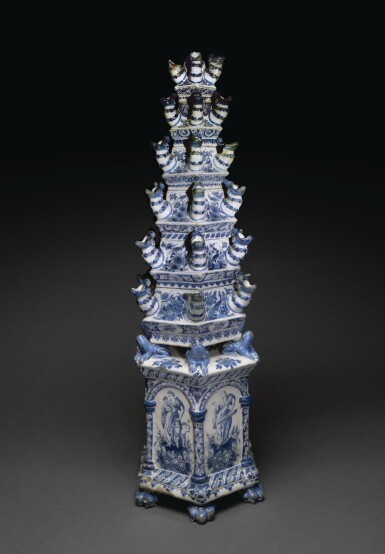 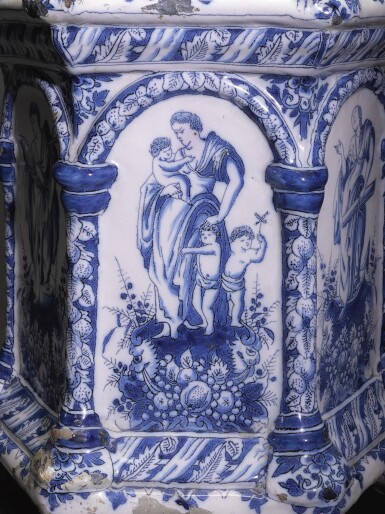 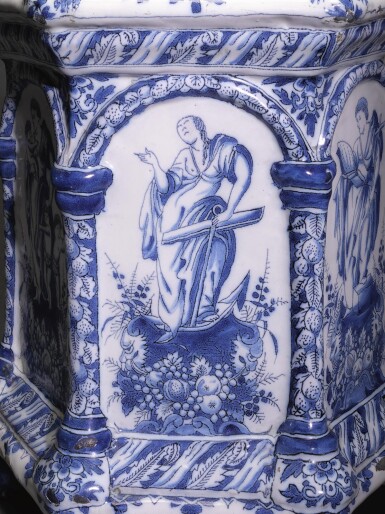 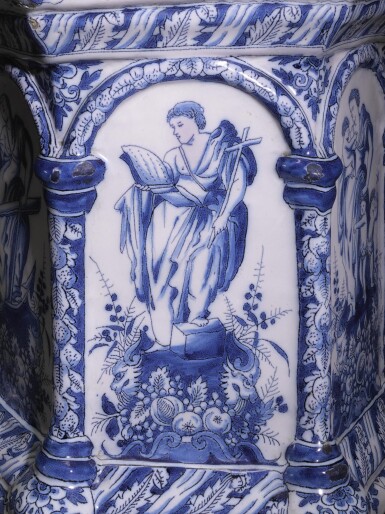 of hexagonal section with six tiers, the pedestal supported by lion's paw feet and surmounted by models of toads, moulded with colums supporting arches, the recesed panels painted in shades of blue and `trekked` in black with allegorical figures emblematic of Faith, Hope and Charity, each subject is repeated, on plinths painted with masks suspending garlands of fruit, each section issuing six spouts modelled as gapping beasts, painted in the chinoiserie style with vignettes of birds on rockwork issuing glowers above patterned borders, the dome finial painted with a flowerhead, AK monogram to the top of the plinth and painted in incised numerals to the sections

Some relatively minor damages and losses to the spouts with some old plaster restoration, typical of such vases and in need of some professional restoration. One section with a different numeral from the remaining parts. Likely to have been supplemented with a section from the pair to this vase at some point in the past.

The plinth, one foot has been broken and re-stuck with someaccosiated glaze losses and chipping around the break. Quite extensive scattered glaze chipping with some old overpainting which has discoloured. AK mark and `3`

The largest section (painted with alternating vignettes of roses and peacocks) has two spouts notably damaged, one of them is significantly reduced with parts of an old plaster replacement present, the other is a cleaner break to the upper jaw of the spout which is lost. Some scattered glaze chips and flakes with some old overpainting to the tips of two spouts and to the egdes of the body. Painted and incised `3` to the underside and painted `3` to the interior.

The next section (painted with vignettes of alternating crested birds and chrysanthemum and hen-line birds on rockwork) has two spouts beside each other which have lost a section to the lower jaw with signs of old plasterwork, again some scattered flaking and chipping to glaze and sogns of old overpainting. Small chip to inner rim and some flaking to edges. Painted and incised `4` to underside and painted `4` to interior so perhaps a section from another tulip vase from this pair or garniture.

Next section (painted with alternating vignettes of crested and non-crested long-tailed birds), one spout has the upper part damaged and partially missing with signs of old plasterwork and restoration. Another spout has a large chip to the lower jaw with old restoration and some scattered chipping and flaking to the rims of the spours with old re-touching. Some slightl glaze chipping to the edges with old overpainting. Painted and incised `3` to inteside and painted `3` to interior.

The next section (painted with similar vignettes of birds perched in branches) has significant damage and loss to two opposing spouts, , one has lost the entire heads, the other the upper part of the jaw. Anopther spout has been broken through the upper part and restored with some associated losses covered in old overpainting. There is also a large rim chip approximately 5 cm. wide and 2.5 cm. high. Again some minor chipping and flaking to the tops of the spours and the edges, some with old re-touching. Incised and painted `3` to the underside and `3` in blue to the interior.

The next setion (painted with small flower sprigs below lappet-shaped panels) has two spout beside each other with notable losses, one is significantly reduced with signs of old overpainting, the other has a loss to the upper jaw of the spout with traces of old overpainting. Again some scattered glaze chipping with some re-touching. Painted and incised `3` to underisde and painted `3` to interior.

The finial has significant damages and losses and signs of old restoration to all of the spouts and the finial at the top has been reduced with a painted flowerhead masking this loss (most likely of a small urn-shaped sections). Some chipping and flaking to the edges with old overpianting. Painted and incised `3` to the underside and painted 3 to the edge.

Please note that this lot will be go the warehouse after the auction.

Obelisk-like tiered spouted flower vases were the pinnacle of production for the potters of Delft in Holland at the end of the 17th century and of the thirty or so Delft potteries, De Grieksche A factory under the management of Adrianus Kocx is the most celebrated producer of flower pyramids. The taste for these types of vases was undoubtedly influenced by Mary, daughter of the Duke of York and the future Mary II (1662-1694). She was betrothed to her cousin the Protestant Stadtholder of Holland, William III of Orange (1650-1702). This alliance saw Mary travel to Holland where she developed a passion for Delft `porcelain` which she used to decorate her Palace and gardens at Het Loo amongst other residences. The subsequent Glorious Revolution of 1688 brought William and Mary to England and Mary's Royal favour for these bold and architectural wares proved influential on the English aristocracy making them popular in both Britain and across Continental Europe. They would symbolise, for a period, a perfect unity of art and nature as well as status.

Like many of the flowers which became popular in the 16th and 17th centuries, spouted flower vessels are found in Persia and the Middle East in the late 12th century. A form of fritware spouted vessel made in the Safavid period (1500-1722) proved influential and are broadly of similar form form; an ovoid body with a central wide neck surrounded by multiple smaller spouts. The simple form became popular in the middle of the century with potters in France, the Low Countries and England in particular. The forms were used in domestic and ecclesiastical settings and their importance as luxury objects can be seen in their appearance in portraiture of the period where the objects an the flowers they contain reflect the status of the owners; similar vessels were also produced in glass and silver. The makers sought to produce containers which would show blooms to their best advantage but also to create objects which would be attractive in their own right. As the demand to make more extravagant shows of flowers increased so did the need for ever more elaborate vessels. The potters of Delft, in particular at De Grieksche A and De Metaale Pot factories understood the requirements of their clientele.

In the 1680s saw Samuel van Eenhoorn, Adrianus Kocx’s predecessor at De Grieksche A factory begin production of spouted vessels. His importance at this time cannot be overstated, not only for producing beautiful, fashionable and exotic wares which attracted Royal patronage but for marking his wares SVE, a practice which his successor continued and was not commonplace in Europe as it was by the 18th century. This practice of factory marking, also adopted by his competitors has allowed modern scholars to survey surviving and excavated pieces. Whilst documentation relating to the purchase of earthenware and contemporary accounts helps to build a picture of production and patronage, the ornamentation of the highest status pieces with a coat of arms, and elaborate ownership cypher or even, in the case of their most important client, a Royal portrait is a permanent record of the period and provenance of a piece. It is useful to compare such pieces to the present vase. A flower pyramid in the collection of the Victoria & Albert Museum (inv. Nr. C.61501925) (1) is similar to the present vase in form and decoration and is painted with the coat of arms and motto of John Churchill (1650-1722) as Earl of Marlborough (1689-1702) a title awarded to him by William III for his support during the Glorious Revolution. Another similar and slightly taller pyramid from the celebrated group of vases from the Devonshire Collection, Chatsworth House (inv. nr. 142.1) (2) was ordered by the 1st Duke of Devonshire, another supporter of William and Mary.