The Ribes Family: Collectors Through Centuries

By James Reginato
Translate this page
The effortlessly glamorous Comtesse de Ribes will part with a superlative selection of historical paintings, works of art and books from her beautiful home in Paris, writes James Reginato.

I n February 1948, Vicomte Édouard de Ribes, a dashing young war hero, brought his striking 18-year-old bride, Jacqueline, across the threshold of his family’s hôtel particulier on the Right Bank of Paris.

The newlyweds were installed in a wing of the mansion, the hôtel de la Bienfaisance, which had been built in 1865 by Édouard’s great-grandfather, Comte Charles-Édouard de Ribes. Six generations of the Ribes family – ennobled financiers and discerning connoisseurs of the arts – subsequently filled the house with splendid paintings, furniture and decorative arts, as well as an extraordinary collection of books.

Into this rarefied atmosphere, Jacqueline brought fresh air with her very special brand of refined yet modern elegance and glamour. The love that united the couple de Ribes for over 60 years and the pleasure they had to welcome the most prestigious guests in a place that reflects “l’art de vivre à la française”, enlivened their entire collection with simplicity, warmth and a sense of splendour.

In the beginning, though, her arrival was somewhat startling to her conservative father-in-law, Comte Jean de Ribes, who presided over the house. Jacqueline came from an older noble family, one that was considerably more worldly. Her father, Comte Jean de Beaumont, 5th Comte of the family name, was a descendant of Crusaders, as well as Louis XIV’s minister, Jean-Baptiste Colbert. A banker, politician and sportsman, her father notably kept the title of vice president of the International Olympic Committee for several decades. Her mother, Paule de Rivaud de la Raffinière, heiress of the Rivaud empire – founded by her father Olivier Rivaud – was a writer and translated Ernest Hemingway and Tennessee Williams, amongst others.

Soon enough, Jacqueline won over French and international society, who came to regard her as the personification of Parisian elegance and as a fashion icon. She and Édouard, who succeeded his father’s title in 1982, made the house, where they brought up their two children, one of Paris’s most glamorous residences. Her husband, who had become President of the family group Rivaud, was an art connoisseur as well. At the same time, he became Treasurer of Les Amis du Musée du Louvre, President of the society of Les Amis du Musée d’Orsay from 1980–2013, and President of Paris Musées.

After her husband’s passing, the Comtesse became Honorary President of Les Amis du Musée d’Orsay, and took over the sponsorship of an annual dinner gala, during which she delivers a highly anticipated speech.

“Jacqueline and Édouard made the house one of Paris's most glamorous residences.”

Along the way, Jacqueline de Ribes took on many roles. She was a theatrical impresario, and ballet company director for the Marquis de Cuevas’ International Ballet. She produced shows for Eurovision, with celebrities such as Marlon Brando, Shirley MacLaine, Elizabeth Taylor and Richard Burton, with all benefits going to UNICEF. She adapted a film on television, Les Italiens, which had great success with both critics and the public.

The Comtesse was appointed Honorary Citizen of the City of Florence for her philanthropic endeavours, including for the addition of a wing at a Pediatric Hospital. She was also awarded the Legendary Woman of the World award in 1980, in Birmingham Southern College, Alabama, alongside other splendid women such as Bette Davis and Ann Getty. She also received the Rodeo Drive award in 1985 for her couture collection.

Both passionate collectors, Jacqueline and Édouard added to the home the treasures they found together, which included tapestries, Egyptian Revival candelabra, porcelain, gold snuff boxes and remarkable collections of 18th-century paintings by artists such as Hubert Robert.

Though filled with museum-quality pieces, there was never anything stuffy about the Hôtel de la Bienfaisance. “It was an atmosphere of true elegance and quality,” remembers the couple’s good friend Reinaldo Herrera. “It was all about history and beauty and everything that had to do with elegance. But the true elegance of their spirits was in the naturalness of everything they did. There was no affectation. It was modern, because any house she would have lived in would have to be modern.”

Today, following the recommendation of her husband, the Comtesse de Ribes has decided to share a selection of historical pieces with other connoisseurs around the world. These fabulous works will be on sale at Sotheby’s Paris on 11 and 12 December, and will present one of the most fascinating ensembles of paintings and French decorative arts to appear on the market in recent years.

Enter the World of the Ribes Collection, The Essence of French Elegance 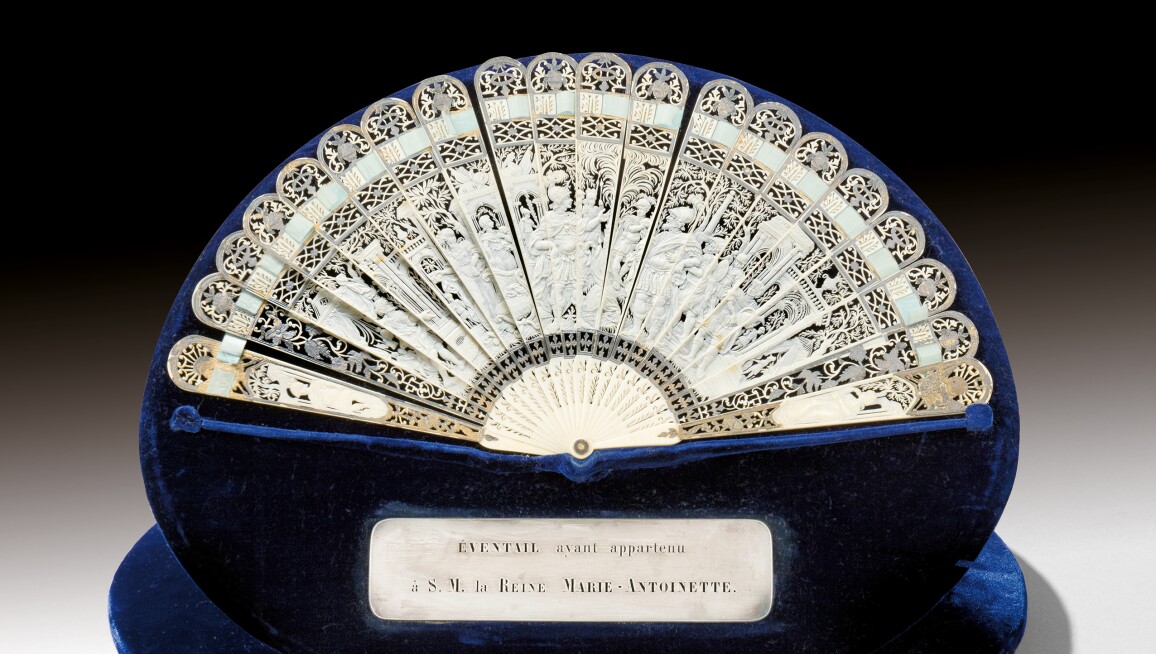 Highlights include works with provenances of great note, including those of Louis XIV, Louis XV, Louis XVI, Marie-Antoinette and the Duc d’Orléans. Along with distinguished Old Master paintings by Élisabeth-Louise Vigée Le Brun and Marguerite Gérard, there are spectacular items of decorative arts, including an exceptional automaton clock, presented to Queen Marie-Antoinette in January 1792. The library boasts rare original editions of Montaigne, Flaubert, Apollinaire and others from the 16th to the 21st centuries.

“But the true elegance of their spirits was in the naturalness of everything they did. There was no affectation. It was modern, because any house she would have lived in would have to be modern.”

Jean-Gabriel Mitterrand, an art dealer and friend, recalls, “Jacqueline de Ribes brought together her talented and famous friends with the great names of European aristocracy, young government ministers – some of whom would later become President, including Georges Pompidou and Valéry Giscard d’Estaing – and American friends, such as Ronald and Nancy Regan, Oscar and Annette de la Renta, Estée Lauder, Nan Kempner and Henry Kissinger.”

Marina Cicogna, another intimate friend, shares, “Jacqueline is a unique talent in whatever she sets out to do. She is the last of a lost breed. She is both the simplest and most sophisticated person in the world. Irreplaceable.”

Jacqueline de Ribes has been a star of international society since 1951, when the young Vicomtesse at age 22 made a spectacular entrance to Palazzo Labia, at the masked ball of Carlos de Beistegui, leaving all the guests in awe. This moment was captured by Robert Doisneau, and the photo appeared in a double-spread in Vogue magazine.

Four years later, while she was having lunch in a Manhattan restaurant with Beistegui – she had travelled to New York to attend the “April in Paris” Ball – Diana Vreeland made a beeline over from her table to meet the young Vicomtesse. “We’d like Avedon to take your photo tomorrow,” the fashion empress informed an astonished Jacqueline. The iconic portrait that resulted – with its subject in a regal Nefertiti-like profile – was published in Life, and subsequently in the photographer’s seminal book, Observations, 1959, accompanied by text from Truman Capote in which the writer christened de Ribes a fabled “swan”, in company with Marella Agnelli, Babe Paley and Gloria Vanderbilt.

“It was an atmosphere of true elegance and quality”

The world’s top designers vied to dress Jacqueline de Ribes, who was elected to the International Best-Dressed List in 1956 and elevated to its Hall of Fame in 1962. Later, the Comtesse drew on her taste and experience to create her own much-lauded design business, which she directed from 1982 to 1995.

Adored worldwide, her fans are legion. Perhaps the most fervent was Yves Saint Laurent. In 1982, the couturier compared her to one of the great figures in literature, from Marcel Proust’s Remembrance of Things Past, 1913: “With her, the character of Oriane, the Duchess of Guermantes, emerges anew and comes to life. In the sad and dull world of today, she represents the last figure of the aristocracy of which, even then, Proust deplored the disappearance.”

“The Vicomtesse de Ribes is a rare person,” he continued. “With her, everything sparkles and becomes luminous again.”

A generation later, Jean-Paul Gaultier dedicated his 1999 couture collection to her, with the title Divine Jacqueline. “She is, for me, the incarnation of Parisian chic,” he said. “The photos of her by Avedon made me love fashion… She continues to be an inspiration for all of us.”

At the Élysée Palace in 2010, it was another occasion to extol her when the then French President Nicolas Sarkozy presented her with the Légion d’honneur for her philanthropic and cultural contributions to France. “Jacqueline is the last queen of Paris,” announced Valentino. A few others noted, rather portentously, that she was the last “survivor” of the legendary Beistegui Ball. To that she offered a witty retort: “It sounds like surviving the Titanic.”

The tributes continued in New York with the opening of the Metropolitan Museum’s Fall 2015 exhibition, Jacqueline de Ribes: The Art of Style, a dazzling study of her life of creative expression, featuring some 85 of her couture ensembles. “An examination of these exquisite designs… yields an understanding of the connoisseurship, intelligence, discipline, creativity and originality that predicates the seemingly effortless effects of memorable style,” wrote curator Harold Koda in the exhibition catalogue. (In her foreword for the volume, Diane von Furstenberg recalled first sighting Jacqueline de Ribes on a mountain slope in St Moritz in 1968, as she zoomed by like a lightning bolt: “I had never encountered a creature of such glamorous perfection… she is a volcano of talent that never ceases to surprise.”)

Yves Saint Laurent had once said about Comtesse de Ribes “It is hard for me to talk about her in such few words: She makes me dream.”

Comtesse de Ribes in turn dreams that “this sale be a tribute to the taste and erudition of my dear husband Edouard.”