By Alain-Michel Boyer
Sotheby's Collection Marceau Rivière sale from 18–19 June, brings to auction a collection built up over half a century. It represents a group of works which bring together many of the varying styles of sub-Saharan Africa.

“I have always loved the Côte d’Ivoire.” Marceau Rivière often said, and he still repeats it today. This country, where he has stayed and often revisited, immediately captivated him with the splendour of its art. It was this passion, as well as the strong connections he made on the ground, that allowed him to put together this admirable collection. Rare as it is among collectors and dealers of African Art, he wanted to discover for himself the very places where these works of art were born, and so he traversed the country on the bumpy roads that still prevailed in the latter part of the 20th century.


He travelled all the way to its most westerly confines, where We masks (at that time still known as Guere) abounded and which, in his words, “nobody wanted”. “In fact, I travelled throughout Côte d’Ivoire.” He had his reasons for loving this country above all others, as he often says: “the most beautiful artefacts, the most varied too, come from Côte d’Ivoire, and also from the Congo.”

Indeed, when compared to other countries on the continent, Côte d’Ivoire offers stunning aesthetic wealth and diversity. Where many countries present a certain cohesion within styles, the Côte d’Ivoire differentiated by its wide range of expression and the multiplicity of its flourishing creative hubs. This profusion is partly due to ethnic diversity, with around sixty-two groups defined by their language, religious practice, the nature of their ceremonies, and their ties to specific geographic locations. This explains why the pieces they produce are emanations of a particular identity yet also frequently encompass borrowed elements, with sculptors from a different ethnic group sometimes valued more highly than the local sculptors. This is especially true for sacred sculptures, whose creator should remain unknown, as these sculptures were not supposed to have been produced by the hand of man, hence the arbitrary nature of attributions that abound today (“Master of...”).

Paradoxically, it is often within the bounds of a particular region that the greatest formal diversity can be observed. In one village, during one celebration, morphologically different pieces will come out one after the other: zoomorphic and anthropomorphic masks, slender head crests, architectonically powerful helmets follow one another in logical patterns. So much so that - in the central region of the country for instance, home to the Baule, the Yaure, the Guro, the Wan, the Mona - idealised faces and extremely stylised figures bring together essential geometrical abstraction with trends bordering on realism. But this artistic profusion can also be explained by the fact that, in this country, almost all fields of creation were taken over by sculptors. These sculptors carved not only masks and statues, but also oracles, parade objects, gold weights made out as figurines, jewellery and even utensils; so many objects that disappeared with the advent of the industrial age. In fact Marceau Rivière came to Côte d’Ivoire at a turning point in art transmutation, when numerous sculptures could still be found, but many villagers were parting with the oldest ones.

Reasons for this were varied: some related to ritual practices (for instance, between 1972 and 1980, the Lobi rid themselves of many small scale statues); changes in daily life requirements (when Kulango women took off their brass bracelets and anklets they were taken by truck to Abidjan to be melted down); or, more generally, an evolution of taste, when statuettes and masks with their patina, age-worn aspect and coatings in vegetal hues were replaced by new pieces, covered in bright, vivid, industrial colours.

These new sculptures have prevailed in villages for the last half century as they present two significant advantages: their vibrancy and the fact that, even during the rainy season, they can be worn or taken “out and about” (as the cult leaders put it) without alteration. In order to locate the older objects, Marceau Rivière was constantly in the field, interacting with villagers; he became friends with lineage chiefs and bought pieces from some of the many Dyula dealers of the time, such as the famous Ali and Cissé. Some prestigious pieces came from the timber merchant Roger Bédiat, originally from Martinique he settled in Côte d’Ivoire; choosing locations for timber felling in the high forests led him to secret dwellings where ceremonial masks were kept in the sacred woods - already, the only true survivors of the primary forest.

These are the exceptional works that make up Marceau Rivière's fabulous collection - even more of them can be seen in this catalogue than in the book we published together in 1997 - works where grace and magnificence combine with the aesthetics of a magical intensity of such raw emotional force as to touch the supernatural. Indeed, for Ivorian artists, for an object to be “efficient” in the realm of the sacred, doesn’t it first and foremost need to display all the marks of excellence in its execution to ravish not only humans, but also the forces of the invisible? 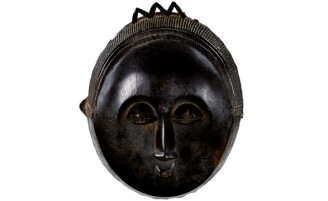