A mongst the many extraordinary works in the Sculpture : Afrique, Océanie, Amériques sale, open until 4 December, there are three exceptional pieces from the collection of the Vérité family – Pierre (1900-1993) and Suzanne and Claude (1929-2018), who were among the top dealers of the 20th century for traditional African art and who, in this capacity, contributed to the influence, promotion and understanding of African art first in France and soon thereafter abroad.

The Vérités opened their first gallery on 3 Huygens Street, next to that of John Graham from whom they received advice and introductions. Close to all the tribal art dealers at the time – from Paul Guillaume to Charles Ratton to Louis Carré, Pierre Loeb and the Portiers and to the circle of the surrealists, including Eluard, Breton, Tzara, – their business grew rapidly. The gallery soon became cramped, and in 1937 was moved to a new location on 141 Boulevard Raspail where Galerie Carrefour was born, right in the heart of the vibrant Montparnasse district. The gallery received the greatest collectors and intellectuals of the time who quickly helped establish Pierre Vérité as an important dealer.

During the war the gallery lay dormant, but the 1950s would herald its renewal and the beginning of a prosperous period for both the gallery as well as for Pierre and Suzanne Vérité. It is at this time that they were joined by their son Claude and his wife Jeanine. Together, the family gravitated towards the international art scene, meeting William Fagg of the British Museum as well as the great American collectors such as Helena Rubinstein and the important dealers on the other side of the Atlantic.

The three Vérité pieces in this Sculpture sale, a Baulé Monkey from the Ivory Coast, the Punu mask and the Janus–faced Fang helmet mask from Gabon are examples of the Vérité family’s taste and their systematic search for objects that were the most characteristic and significant. We cannot fail to recognize the finesse of the sculpture: this cup-bearing Baule Monkey with its notable detailing of each phalanx of the carefully carved fingers and the beauty of its rough and ancient patina formed by a repeated propitiatory gesture of anointing to protect oneself from evil, disease and misfortune.

We bow to the elegance of the Okuyi Punu Mask. The balance of its proportions and the realism of its features echo the importance of women in the social organization of the Punu. At once an incarnation of the ancestral spirits and female beauty, this mask is the perfect example of those celebrated by the modernists and firstly Picasso as early as 1910.

And finally, how can one do anything but admire the strong presence, the magical aura of this nlo-ngontang helmet mask, danced by the Fang. In this instance, in the context of the initiatory ritual of the same name ngontang, its four eyes enabled the wearer to reveal the presence of evil sorcerers.

Three objects, three ethnic groups, three beliefs and three rituals for one "Vérité” or “Truth" as it were and a singular choice, that of a generation of dealer collectors who marked the history of the Arts of Africa and Oceania. 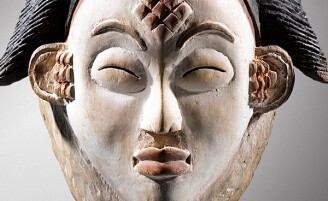 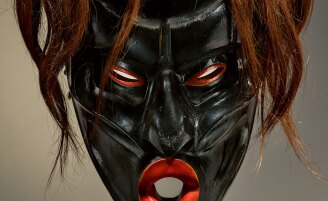