A fter an enchanted interlude at the Villa Kerylos, Hubert Le Gall is turning his attention to the arts of Indonesia, which, for the first time, are the subject of an all-encompassing sale bringing together sculpture, objects, jewelry and fabrics. For the Sotheby's exhibition space the artist-designer, known for his museum scenography, has chosen traditional textiles from the island of Borneo as a setting – an opportunity to revisit the sources of inspiration and the eager curiosity of this artist who defies categorization.

What is your relationship with non-western objets d’art? Are these works that fascinate you?

First and foremost, I am fascinated by objects that do not reveal everything right away and which are, in effect, boundless. To discover, over time, a feature, a detail that had escaped me, is a pleasure that I never tire of – whatever the artwork. This goes for strong pieces that speak to the body in an almost abrupt way to more fragile creations; such as certain porcelains that seem so ethereal that one hardly dares to touch them. Non-Western art, by definition farther from our culture, also exudes its own mystery: take the Dogon mask with a hare's head at the Quai Branly museum, made of pigments, wood, and vegetable fibres for example, or this stone seat from the island of Nias, which appears in the sale. Neither of them is legible at first glance. Indonesian art is even more complex because it is so diverse, as much in the style specific to each island as in the external influences. A single constant: man is always at the heart of the subject. On earth and in the great beyond; as it is in Greek mythology.

To which you paid great tribute to in your exhibition at the Villa Kérylos, some of whose pieces are on display until 7th November at the Galerie Avant-Scène in Paris. How does inspiration come about in a project of this scale?

It's a moment where several energies cross paths. However, inspiration is built over time, beyond a simple theme, a privilege of the fashion world. Mine is based on a foundation. And Kerylos as well as Greece are intimately part of it. The villa has dazzled me for over thirty years. It is a perfect architectural and decorative model that revisits, with a freedom of interpretation, the culture of a country that is very dear to me because I own a house and a studio in the Cyclades and I speak the language. However, the exhibition required a new approach – respectful but radical. With flashes of inspiration: the gold decoration on a blue background in Madame Reinach's room was a revelation which, in this incessant game of ping-pong, echoed the arabesques in Greek ornamentation, before inspiring the jewel-like Penelope chair, in wrought iron and gilding. By immersing myself in mythology, Kerylos also made me more studious; reading is wonderful because it doesn't impose images, it simply provokes them. It is also thanks to this that I was initiated into something that I knew little about, the mysteries of Indonesian art.

Which pieces appealed to you? Is there a common thread that guided your choices?

First I discovered an eclectic and fantastic universe, like this figure with huge eyes made of shells or this statuette with infernal jaws. Made with whatever means were at hand! The symbolic power of these objects compared to the humbleness in the materials of which they are made and that of their creators is a duality that I have always been attentive to. In the magic of childhood, weren’t the multicolour bits of glass, rolled about by the ocean, seen to be priceless treasures?

However, among this abundance of objects and styles, I lingered over a dozen cotton textiles from the nineteenth and twentieth centuries from Sarawak, a state in the northern region of the island of Borneo. In the traditional societies of Indonesia, even more than in other civilizations, weaving was one of the major means of artistic expression. Used during the great ritual festivals, the fabrics represent the link between humans and the invisible spirit world. They accompany the inhabitants of the archipelago from birth until death. The oral tradition even says that the weavers never drew the central figures because they came to them in a dream, transmitted by a mythical heroine. These ancient textiles have not been distorted by modernity or by the pressure of the great monotheistic religions. When you see them for the first time, you only detect geometric compositions and abstract forms. These archaic motifs are extremely complex; they are situated between image and decor and often between man and beast. I have always liked ambiguity in creation because it allows for a poetic parenthesis.

In the context of the sale exhibition at the Galerie Charpentier, you will once again exercise your talents as a scenographer. How do you plan to place the textiles you have chosen?

By revealing the central figure. I want to punctuate the hanging of the fabrics with photographic "extracts", with magnifying effects: by isolating a character, an animal or a hybrid being that is repeated ad infinitum on the weft, lined up as in a parade, in this way I invite the visitor to immediately understand the particularity of this discreet protagonist, to approach the symbolism of the textile and to go beyond an apparent abstraction.

Did the discovery of these works give you new ideas? What are your projects? Will you find your way back to the studio?

While going through the objects in the sale, I was instinctively attracted by the motif and the drawing, the symbols and the colours and also by the naivety of certain objects more than by the hieratic nature of the large sculptures. After the monumental exhibition at Kerylos, I want to return to what is personal and to objects for a more private use, such as jewelry or boxes to hold personal effects. During the last Giacometti exhibition at the Foundation Maeght, I loved this small bronze box, made to hold a shaving kit that hung on the wall. The idea of a micro-container around which symbols can be ascribed, but also associations of materials such as metal and ceramics appeals to me. Especially since I will be working in porcelain for the first time for a new project abroad. Creating in and for places I don't know, going back to manual work and moving away from the studio are all breaths of fresh air in what comes next. 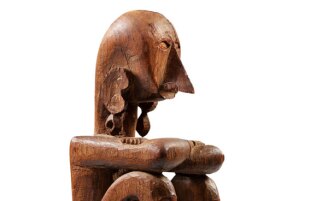