T his collection of Pre-Columbian Art, assembled from the mid-1970s to the early 1980s by a Belgian couple, presents a varied and significant selection from all the major civilizations of the South American continent before the arrival of Christopher Columbus. The fine taste of the collectors testifies to a scholarly passion for these creations, reflected in the precise and accurate choices made in the selecting of each piece. The collectors were guided in their acquisitions by renowned Belgian and Swiss dealers such as Emile Deletaille and Philippe Ancart. The sale of this collection is an opportunity to pay tribute to these anonymous artists of what was then the New World.

The art of Mesoamerica is particularly well represented. Our itinerary begins in western Mexico and the Nayarit, with several examples of hollow polychrome ceramic figures. This group is dominated by an important standing figure (Protoclassic, 100 BC-250 AD). It was probably produced as part of a pair representing a man and a woman. These figures of couples in Nayarit art, in the same way as Jalisco and Colima, embodied those of ancestors and as such had important ceremonial value.

Among the major anthropomorphic or zoomorphic ceramics from the Colima culture, the snake-shaped vase (Protoclassic, 100 BC-250 AD) previously in the Jay C. Leff Collection (1925-2000) is particularly representative. It has been displayed in several important American exhibitions devoted to this collection, in 1966 at the Brooklyn Museum in New York, where archival photos show it in the display case, at the Allentown Art Museum in 1972 and at the Huntington Galleries in 1974.

Equally important and rare to the market, this grey hard stone Colima mask worn during ritual dances in shades of green is extraordinary in its modernity. We must go back in time slightly and return to the lands of the Valley of Mexico to discover the female statue, Morelos / Tlatilco (Ancient Preclassic, circa 1200-900 BC), that came from Philippe Ancart in Brussels. This is a particularly characteristic example of the female figures known as "pretty ladies" with marked sexual attributes, wide hips and steatopygous buttocks.

In southwestern Mexico, the Mezcala culture in the state of Guerrero is well known for its production of anthropomorphic statuettes carved from volcanic rocks such as andesite or basalt (Late Preclassic, 300-100 BC). The Mezcala figure in this collection is the very expression of the geometric abstraction that prevailed in the artistic creation of this sculpture.

The two emblematic cultures of Mesoamerica, Maya and Aztec, are each represented by an important statue. Both the figure of the Mayan priest and the statue of the Aztec corn, agriculture and fertility goddess Chicomecoatl, exemplify the typology and stylistic characteristics developed in the respective art of these two major civilizations.

If the cultures of the American Andes are somewhat less present in this collection, a beautiful group of Nazca ceramics in particular reveals the quality and sophistication of the technique of this original and well known production, but also shows with its rich polychrome the symbolism of the decorations of scenes inspired by mythology or made up of naturalistic subjects.

The sale of this collection of Pre-Columbian Art in the first part of Extra! Objets rares et singuliers extra-européens offers seasoned collectors, but also curious amateurs, the opportunity to plunge into the extraordinary universe of these ancient civilizations that invites one to adventure to the ends of the earth. 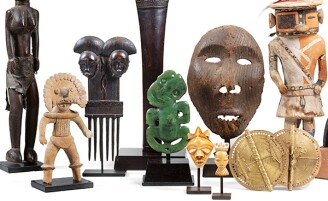