Adventurer and Collector: An Interview with Jean-Paul Morin

Annick Colonna-Césari: Where does your passion for travelling, which is reflected in your collection, come from? Did it come from your family environment?

Jean-Paul Morin: Absolutely not. I was brought up in a very Catholic bourgeois environment. My parents, both doctors in Paris, didn't travel, didn't collect, and they weren't avid readers either. As a child, I myself was not attracted to books. On the other hand, I collected marbles, matches or playing cards, and then, around the age of twenty, I bought a book on Indochina, I don't even know why anymore. And no doubt influenced by the international political context at the time, I continued to take an interest in that part of the world. And that's when I started collecting travel books. I also had the good fortune, at the start of my career, around 1970, to work in an office that was on rue Drouot, in Paris, next to the auction house. This allowed me to go and view the sale exhibitions in my free time. At this same moment, I decided to start travelling. Every year, I would leave for two weeks to visit a country in Indochina. Later on, my activities took me to both North and South America. For Publicis, where I worked for about thirty years until my retirement, I travelled to roughly a hundred countries across all five continents. Maurice Lévy, the president of Publicis, had given me the job of setting up and managing the company's global network. All these voyages fuelled my taste for collecting.

A.C-C: What exactly were you looking for?

J-P.M: I have an inquisitive nature. I had gone to business school; I had a background in accounting and economics. But thanks to these books, I became fascinated by the accounts of the great explorations and expeditions of the seventeenth, eighteenth and nineteenth centuries. And I learned a lot - in history, geography and ethnology. At first I systematically read all the books I bought. Unfortunately, my love of acquisition exceeded my reading ability. Therefore I had to be satisfied by simply consulting them. But I did so regularly. And I still do so today. I choose a book from my library and immerse myself in the text or contemplate the illustrations. And I can spend hours looking at maps. There are many books in the sale that recount expeditions, such as the eighteenth century Pacific expedition led by George Vancouver or Jules Dumont d'Urville's Antarctic expedition the following century. They are fabulous. They are fabulous because they don’t just contain the stories of the voyages. They have atlases that show the landscapes and the cities, or images of fauna and flora. They are treasures of knowledge.

A.C-C: This taste for books has never left you, nor has it prevented you from becoming interested in other fields...

J-P.M: Indeed, I became interested in objects quite naturally. It was the illustrations in these books that piqued my curiosity. Thus my first inclinations as a bibliophile for works on Asia led me to buy Han horsemen and Ming or Tang statuettes. However, I became tired of them because of the problem of forgeries. Then, starting in the 1990s as I began to travel to the poles, the Arctic and Antarctic, I turned to tribal art, particularly the art of the Inuit. I was taken by their utilitarian objects, often related to hunting or fishing - knives, scrapers, scissors, spear thrusters, harpoons, which they carved from walrus tusks or in narwhal ivory.

Finally, in the early 2000s, I discovered kachinas, ritual Native American dolls. These painted wooden figurines were offered to children and they also ensured fertility, rain and protection. Purists refuse to consider them as works of art. Obviously, they do not have the same significance as an Impressionist painting or a Louis XVI chest of drawers. For me, I appreciate their colors, their symbolism, and their expressiveness. And I am sensitive to their deeper meaning. They have something that is absent from traditional art objects: they have a soul.

A.C-C: These objects, these works, did you bring them back from your travels?

J-P.M: It depends. I bought them in France, the United States or England. A lot of my books come from well-known, specialized bookstores. One of them in Paris that has largely contributed to my passion is that of François Chamonal, on rue Drouot. He was the one who sold me my first books. He knew how to give advice. His son Rodolphe eventually took over the bookstore, and I still feel just as much happiness today when I walk through his door. Of course, I also followed the sales at the auction houses, and I often did so from afar. I could leave a bid from China for an auction that was taking place in London, New York or Paris. In any case, the collection was a constant source of pleasure for me. I was working seven days a week. I needed this bit of freedom. And it served as an anchor in my life as an international globetrotter. I spent my whole life in hotels and airplanes, but when I would return home I would be back among my books and objects. In fact, I have never stopped collecting, even if the pace of my acquisitions has slowed down since I ceased my professional activity and moved to Pont-Aven in Brittany. But I continue to travel two or three times a year. For the spring of 2020, I had planned a cruise on the Nile, with visits to temples, and in October-November, I was intending to make a two-month trip from the Solomon Islands to the sub-Antarctic islands of New Zealand and Australia. Everything was cancelled because of the epidemic.

A.C-C: In short, it can be said that collecting, like travelling, is an integral part of your life.

J-P.M: I've often been taken for an eccentric because I was looking at Inuit objects or kachinas at a time when they were ignored. Additionally, I'm rather eclectic. On the subject of travel, I was also interested in ethnological photographs, because I found that they complemented the knowledge to be found in books. I owned a large number of model ships, many of which I have sold. My passion for collecting even took me into other domains. I own several thousand vinyl records of classical music and about seventy tobacco graters. One day, I saw one that I liked. It led me to want to find out more about their history and the history of tobacco. And I was captivated by the variety of their materials - wood, ivory, porcelain... I should add that ever since moving to Pont-Aven, the land of artists, I have been collecting paintings. I like this school of painting, the scenes of markets or ports or the “pardon” {religious pilgrimages in Brittany}. And above all, for a long time now, I have been looking for paintings done by my grandfather, Jean Sala, who was originally from Catalonia. He had his moment of success and then was forgotten. I never met him as he died in 1918. But when I was a child, there were about ten of his works hanging on the walls of our apartment. Yes, collecting really is part of my life and I hope to carry on until my final breath. 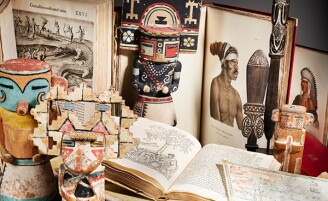