Helena Rubinstein’s and Harry A. Franklin’s Shared Passion for African and Oceanic Art

D espite being born decades and oceans apart, the fates of Harry A. Franklin, the first major promoter and gallerist of African and Oceanic art in California, and Helena Rubinstein, legendary collector and beauty entrepreneur, are intertwined in the history of art. These two fervent collectors both looked beyond obvious fashions to discover unexpected new worlds of imagination and expression, and both reveled in sharing their passion with an audience of friends, associates and fellow art lovers. Their stories converge at the 1966 Sotheby’s Parke Bernet auction of Rubinstein’s estate, which was the first major auction of the Arts of Africa, Oceania and the Americas in the United States. The financial success of this auction was a watershed moment for the art market, bridging the old world of collecting in Europe, especially Paris, and an exciting new audience awakening in the United States. It was also a boon for one of the most enthusiastic Americans in this new world: Harry A. Franklin. 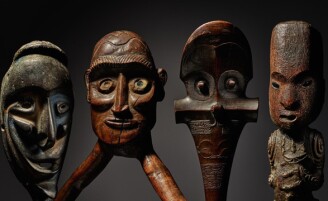 Franklin was the prescient purchaser of numerous lots in that auction, including Rubinstein’s “Bangwa Queen,” a Royal Female Statue from Cameroon. The sculpture was well known at that time, due in part to a famous series of photos taken by the Surrealist Artist Man Ray, and is today rightfully acknowledged as one of the great jewels of African Art. The Queen would go on to make auction history in dramatic fashion when Franklin’s African Art collection was sold at Sotheby’s New York in 1990, selling for 3.4 million dollars – far exceeding the previous world record for the category. This validation cemented the aura around Helena Rubinstein’s famed African Art collection, vindicated Franklin’s enthusiasm and marked another new beginning for the position of African Art in the world of collecting.

For much of the 20th century, Helena Rubinstein was a household name in Europe and the United States. She was a pioneering force in the creation of the modern beauty industry, and she dedicated her long life to building and maintaining a business that became one of the most recognizable brands in the world. With the great wealth that resulted from this success, Helena Rubinstein pursued her personal passion of collecting cutting-edge modern art. She associated closely with the artists whose work she collected: in her circle were Henri Matisse, Georges Braque, Pablo Picasso, Joan Miró, Salvador Dalí and Fernand Léger. Like many of them had, she discovered African Art as both an inspiration for and a validation of modern artistic concepts, and perhaps more than any other collector of her day, lived beautifully with the arts of primary cultures mingled together with western painting and sculpture.

Helena Rubinstein was born Chaja Rubinstein in Krakow, Poland to an Orthodox Jewish family in 1872. In order to escape an arranged marriage, Rubinstein left Krakow in 1896, spending time in Vienna before eventually landing in Melbourne where she changed her name from Chaja to Helena; thus linking herself to the mythic embodiment of female beauty. In Melbourne, Rubinstein opened her first beauty salon, called Maison de Beauté Valaze. At this point in the late 19th century, makeup and cosmetics were not widely used by middle-class women, and the concept of a storefront dedicated to accessible treatments for the hair and skin was quite novel, even in the most cosmopolitan cities of Europe. The women of Melbourne and the surrounding areas flocked to the shop, encouraged in part by Rubinstein’s own fair complexion, which her signature face cream called Valaze promised to promote. Her success in Melbourne led to further expansions of her storefronts, first to Sydney and Wellington, New Zealand (a locale whose traditional arts she would one day champion) and then to London (1908) and Paris (1909), where Helena Rubinstein was able to establish herself not just as an enterprising businesswoman, but as the embodiment of her own brand.

Rubinstein (who from this point in her life until her death was known respectfully as Madame) successfully assimilated into a circle of the fashionable elite, despite her modest background, and gradually built a larger-than-life persona. Her taste for the avant-garde in the visual arts no doubt helped to propel her image, as did her passion for the exotic. She displayed her expansive collections in both her private homes and her salons, cultivating an air of sophistication and refinement to herself and her products.

Following the First World War, Rubinstein moved to the United States, opening her Maison de Beauté on Fifth Avenue in Manhattan in 1915. According to Kathy Peiss, “More than other leading women in the beauty business, Rubinstein promoted the democratization of beauty. Her salons’ elegant furnishings and modernist design were intended to appeal to an affluent clientele, yet she welcomed Saturday afternoons as the busiest time at the salon, when business and professional women, as well as ‘stenographers, clerks and even little office girls came for treatment.”

Rubinstein’s life’s work was the transformation of the beauty industry, and it is difficult to underestimate the significance of her innovations for the culture of cosmetics and beauty. In her private life, her visionary merging of the Arts of Africa, Oceania and the Americas together with avant-garde modern art had no less an impact on the culture of collecting. Harry A. Franklin was one of the first to seize upon the mystique that the Rubinstein provenance held for collectors of beautiful objects, and the appearance of the Pacific Sculptures which Franklin acquired from Rubinstein’s estate is another major event in the history of collecting. 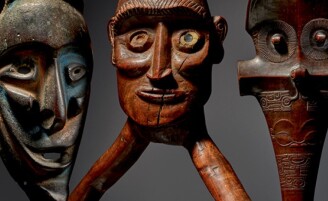 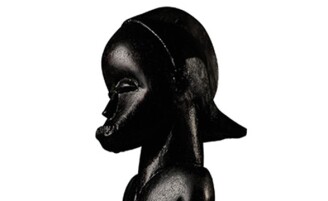