By Sotheby's
Pacific Art from the Collection of Harry A. Franklin, Beverly Hills is being presented this May in New York, alongside Sotheby’s marquee spring sale week of Impressionist & Modern and Contemporary Art.

A visionary pioneer in the field of African & Oceanic Art, Harry A. Franklin (1904–1983) was the first major promoter of this collecting category in California. His interest in collecting began in the 1940s while working as an executive at an apparel company. By the mid-1950s, eager to pursue his passion for art and embark on a more adventurous career, he opened up his first gallery on La Cienega Boulevard in Los Angeles, immersing himself in a world of art and scholarship. Franklin's gallery quickly became a meeting place for adventurers, academics, museum curators and glamorous Hollywood personalities. Always charming and impeccably dressed, Franklin was renowned for his superb eye. Equally as comfortable with anthropologists as he was with film stars, he counted among his clients Paul Newman, Frank Sinatra, Edward G. Robinson, John Huston, Vincent Price and many other notable art collectors across the United States and Europe.

Franklin’s famed personal art collection has a successful past with Sotheby’s, having made auction history in 1990 with the record-breaking sale of his African Art collection at Sotheby’s New York. That sale included one of the world's most beloved African statues, the Bangwa Queen – a superb statue from Cameroon that was famously photographed by Man Ray. Sold for $3.4 million dollars, the statue shattered the world auction record for an African artwork at the time and marked the beginning of a new era of collecting in the category. 29 years later, the Franklin Collection is poised to make history again, with the offering of his collection of art from the Pacific Islands.

Franklin's impressive collection of Pacific Art has remained in the family since his passing in the early 1980s and includes a deep selection of sculpture from the ancient island cultures of Oceania including works from New Zealand and the Polynesian Islands, as well as Melanesia and Papua New Guinea, in particular. 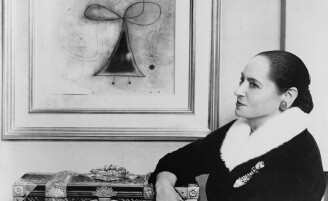 Notably, the collection features a number of works that Franklin acquired directly in the legendary 1966 auction of the Collection of Helena Rubinstein at Sotheby’s Parke-Bernet in New York. A cosmetics tycoon and one of the great collectors of the twentieth century, the Rubinstein name has a special aura in the field of African & Oceanic art. The appearance of the Franklin Collection at auction represents a rare opportunity for collectors to acquire pieces which have not been seen on the art market in half a century. The following four sculptures hailed from Rubinstein’s iconic collection:

This rare and old mask is an exceptional example of the small corpus of masks from the northern islands of Vanuatu. The ancient appearance of the deeply patinated wood contrasts with the remaining traces of blue and orange pigments.

Prior to its acquisition by Rubinstein, this major early Maori Sculpture of stacked human figures was in the collection of the famed founder of Surrealism, André Breton, and a recently-uncovered photograph confirms that before Breton it was owned by the British collector William Oldman. The Maori Sculpture – called a tekoteko – was fitted for a base by the Japanese wood artist Kichizô Inagaki. The figure is seen in several period photographs of Helena Rubinstein’s richly-decorated Paris apartment.

The art of the Marquesas Islands was made famous in Europe at the turn of the 20th century by the French painter Paul Gaugin. Drawn to the extraordinary sculptural creativity of the Marquesan artists, Gauguin took up residence there in 1901, remaining there for the rest of his life. Made up of an ingenious array of overlapping and intertwining human faces, this superbly-carved War Club is the finest known example of this iconic type. In 1984 it was loaned by Franklin’s heirs to the landmark exhibition “Primitivism” in 20th Century Art, held at the Museum of Modern Art in New York, where it was displayed alongside a painting by Gauguin.

Easter Island (Rapa Nui) is the most remote inhabited location on earth and is home to the mysterious world- famous stone heads known as Moai. Closely related to these Moai in style and iconography, but not as well- known, are the island’s extraordinary smaller wood sculptures. Depicting a human head with a stoic stare, this enigmatic Wooden Sculpture is, to our knowledge, unique. The figure’s steadfast expression is counterbalanced by the dynamic pose of the arms, which emerge from the underside of the head. Originally in the collection of legendary dealer and collector of Modern Art, Alfred Flechtheim, during the 1920s, the sculpture subsequently passed to Pierre Loeb – another pivotal figure in the history of Modern Art – who loaned it to the historic exhibition at the galerie du théâtre Pigalle in Paris in 1930. Helena Rubinstein acquired the sculpture from Loeb in the 1930s and displayed it in the fireplace of her New York City apartment.

Outside of the Rubinstein works, the collection features this Suspension Hook from the Blackwater River Region, Middle Sepik River, Papua New Guinea. Franklin acquired the monumental hook figure from the leading European promoter of African & Oceanic Art, the Parisian dealer Charles Ratton. Of great scale and extraordinary sculptural quality, the body of the hook features an ornately swirling symbolic design which invokes water.

The collection also includes objects with a wide range of estimates, including three Maori pendants, with a particularly fine example of a hei-tiki inlaid with shell and red-sealing wax.