Three of a Kind: Red Gems

By Sotheby's
To accompany Jewels Online: The Red Gem Edit, we look at three very different rings showcasing three types of red gem found in the sale. All modern, contemporary designs, these offer the perfect opportunity to accessorize for every style and taste. Treat the lady in your life this Valentine's Day, or give a gift to yourself.

Burma has historically been seen as the most important source of fine rubies, characterized by their robust, rich red color. This 2.90 carat stone is both Burmese and unheated, adding to its value and desirability. As the majority of rubies on the market today have been heated to improve their color, unheated examples such as this one are rare.

As spinel is often found in the same deposits as ruby, historically the two were often confused. The most famous example is in the Imperial State Crown in the British crown jewels, where the ‘Black Prince’s Ruby’ is in fact, a 170 carat spinel and it was only in 1783 that the two were distinguished due to their different chemical composition. Nevertheless, this vibrant stone can be found in a range of colors, with red being most in demand.

Pink tourmaline, or rubellite as it’s known as, can often be found in cocktail rings. Due to the richness of color, they work well as a statement piece, as seen in this example – a bold look at an attractive price point. 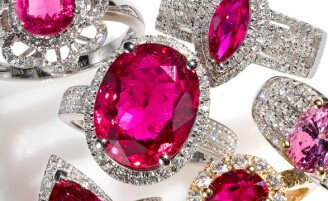