Celebrity Engagement and Wedding Rings in Every Shape

W hether it's Blake Lively’s 12-carat light pink diamond or Audrey Hepburn’s trio of platinum and gold wedding bands, the most famous engagement rings in history all tell fascinating stories. Those belonging to past and present British monarchs, award-winning actresses, models and muses all topped Sotheby’s list of must-see rings, which range from family heirlooms to contemporary bespoke designs. Read on to discover which celebrities share your engagement ring style.

Scarlett Johansson and Saturday Night Live's Colin Jost got engaged this May, but her engagement ring did not make its public appearance until this July when the Avengers star spoke at Comic-Con International. We think her 11-carat light brown, Type IIa diamond, designed by Taffin, was well worth the wait!

The latest celebrity engagement comes from one of the most buzzed-about couples – and the ring certainly does their stardom justice. Alex Rodriguez popped the question to Jennifer Lopez with an emerald-cut diamond, believed to be around 15 carats. The world awaits to discover the designer behind this stunning ring, and we can hardly quench our curiosity!

When Jacqueline Kennedy Onassis married John F. Kennedy in September 1953, she wed with a 2.88-carat emerald cut diamond and a 2.84-carat emerald flanked by tapered baguettes. The First Lady later had her ring remounted to replace the baguettes with 2.12 carats worth of round brilliant and marquise cut diamonds.

Department
Discover a World of Diamonds at Sotheby's

Though all eyes have been on her grandsons’ wives' engagement rings the last few years, Queen Elizabeth II's diamond should not be forgotten. Prince Philip proposed to her in 1947 with a platinum band mounting a 3-carat solitaire diamond surrounded by five smaller diamonds on each side.

Natalie Portman married her Black Swan co-star and choreographer Benjamin Millepied in 2012. The actress’s ring is an antique round old mine cut diamond weighing four carats and set in a double halo of pavé diamonds.

Although her marriage to Frank Sinatra only lasted two years, Mia Farrow's 9-carat solitaire pear-shaped ring will always be remembered.

Upon learning that the Meghan Markle's cushion cut diamond was flanked by two stones from Princess Diana's collection, the world swooned over the newlywed's engagement ring from Prince Harry.

Elizabeth Taylor famously married eight times, but the largest was the 33.19-carat asscher cut diamond, known then as the 'Krupp Diamond,' bought for her by Richard Burton in 1968. A year later the couple purchased what became known as the Taylor-Burton Diamond, a whopping 68-carat pear-shaped stone, from Parke-Bernet, the auction house acquired by Sotheby's in 1964. 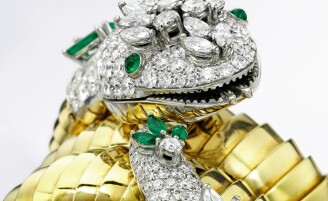