F or Chinese-American artist Anna Hu, music and gemstones have gone hand in hand since childhood. Born in Taiwan to gemstone dealer parents, she fell in love with stones at just the time when, aged 8, she began to play the cello. A young musician of exceptional talent and dedication, her sights were set firmly on a career as a virtuoso classical cellist; she won competitions and went on to study at the Walnut Hill School for Arts, Boston. She was devastated when a shoulder injury and resultant tendonitis put an abrupt end to her dreams.

Anna Hu and the Music of Jewelry

Hu had learned from her professor that every musical note has a corresponding colour – D-Flat minor, she says, is lavender. Revisiting her early childhood fascination with gems, she began to apply this theory to them, assigning a gem to each note, channelling her musical gifts into jewellery. “I could see the possibility of jewels composed in the same way as a symphony or opera,” explains Hu. She knew this would involve placing each gemstone meticulously and purposefully to create a rhythmic flow of line, light and colour.

In 1997, she began studying gemology at the Gemological Institute Of America, New York, followed by jewellery design at the Fashion Institute of Technology (FIT) and Decorative Arts at Parsons School of Design. Armed with this education, she interned at Christie’s New York jewellery department, then worked in the gemstone division at Van Cleef & Arpels, where she learned how to source and select gemstones. The finishing touch to her knowledge came from a masters degree in arts administration from Columbia University. 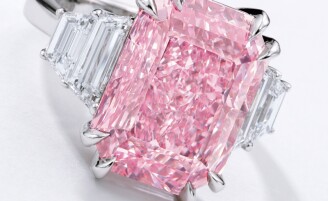 After a stint at Harry Winston in New York, where she was encouraged by designers whom she’d met at FIT, Hu decided the time had come to focus on her own ideas. In 2007, at the age of 30, she founded her own company and launched her first collection. As planned, the jewels possessed a fluidity of line, form and silhouette, while light and colour rippled with musicality over the surfaces of immaculately pavé-set gemstones. Designs were influenced by Chinese themes – plum blossom, lotuses, dragons, phoenixes, Koi carps, cranes and bamboo – while the craftsmanship was resolutely Western, executed in elite high jewellery ateliers in New York and Paris.

Now Anna Hu’s twin passions – music and jewels – move even closer in the five spectacular masterworks to be sold at Sotheby’s Hong Kong this autumn; each has been inspired by a musical instrument. The Silk Road series pays homage, says Hu, to cultural connections between East and West – connections that have influenced music and shaped her life. Part of the proceeds of the sale will go to Silkroad, a charity founded by Yo-Yo Ma, who has always inspired Hu.

The star of the series is a necklace designed as a dancing diamond ribbon of musical script, from which hangs a pendant centred on a 100.02-carat fancy intense yellow diamond (page 135). The idea, explains Hu, was to give form to music theory, weaving notes together to create a composition of “the exquisite melody of the Silk Road”. The design was inspired by the Mogao grottoes in Dunhuang, China, a repository of Buddhist art on what was the Silk Road. In them, murals depict the pipa, an ancient musical instrument of the Tang dynasty, which influenced Western music. The complexity of the necklace – transformable into five jewels – could only be achieved through the skills of the finest French craftspeople, ensuring the result is a masterpiece of high jewellery.

The jade “Cello” brooch takes inspiration from Picasso’s Violin Hanging on the Wall, 1913, the Imperial jade elements specially carved to suggest the curvaceous outline of the cello in a poignant reference to Hu’s own story. In the “Blue Magpie” Brooch, while referencing blue and white porcelain, Hu sculpts songbirds painted by celebrated 18th-century Italian artist Giuseppe Castiglione, who fused Italian and Chinese painting styles. Here Hu imagined a pair of the birds singing together beside an egg – a symbol of life and creativity – formed from a single conch pearl.

In the “Ellington” earrings, a piano features keys made of blue sapphires and white diamonds, which are twisted into rhythmic hoops, inside which swings a conch pearl. The focal point of the “Appassionata” ring is a matched set of five superb emerald-cut rubies. This composition, Hu explains, was inspired by the Appassionata by Beethoven, her “ultimate idol”.

Each of these extraordinary jewels has its own distinct personality, and each is layered with hidden messages linked to music, art and China – from antiquity to modernity, East to West. But, says Hu, they also fuse childhood memories of being a classical cellist, and her Chinese cultural heritage, with the richness of her adopted Western life. Memories and compositions, she adds, that serve as a springboard for the next phase of her work. “When Sotheby’s invited me to create this series, it was as if a firework exploded in my heart,” she says. “These five jewels that encapsulate my spirit are the start of my future.”