By Sotheby's
Thirty years after the first edition of Understanding Jewellery, the book by Sotheby’s specialists David Bennett and Daniela Mascetti remains the ultimate resource for professionals, collectors and enthusiasts alike. Today at its third revised edition and translated into five languages, this 500-page “Bible” has formed the basis of a ground-breaking new App which makes the content available in a new dynamic and interactive way, featuring the full content of the book as well as brand new images, news, events and auction highlights.

B and bracelets were the vogue arm ornament of the early 1920s. Usually designed as chains of narrow, articulated, geometrical plaques and links, or set with courses of gemstones of contrasting colours, they became, in the mid-1920s, wider, flexible, gem-set bands.

The geometrical style of the 1920s well suited the linear shape of these bracelets. Zigzags, triangles, concentric squares, stylised buckles, chevrons and chequered patterns, stylised leaves and flowers pierced in platinum and pavé-set with diamond and multicoloured gemstones of all shapes, became the most sought after decorative motifs combined with motifs inspired by exotic civilization from across the world and the ages.

This 1920s Cartier bracelet was made for Queen Victoria Eugenia of Spain. We know of no other significant Cartier jewel that employed the charming baby pink conch pearl in conjunction with black enamel and diamonds. The fruiting vine central motif is shared with other highly chromatic, ‘tutti frutti’, bracelets designed in the company’s workshops at this date. Although the design is totally balanced and harmonious, the principal gems, all of different sizes and slightly different shades of colour are placed asymmetrically giving the jewel a sense of tension which is highly unusual.

This sapphire and diamond bracelet by Van Cleef & Arpels was made around 1925. Note the simple yet striking composition of interlinking circles and cross motifs, the beautifully matched stones and the superb workmanship, employing sapphires “calibré-cut” to fit the settings.

Download the app designed for both Android and Apple tablets devices. (iOS |Android) 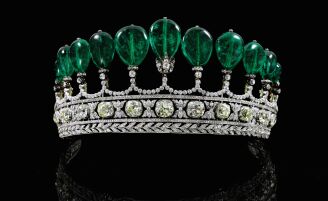