R emember the time when a buttercup trembled beneath your young chin? When hours drifted idly by with fluffy seeds blown from a dandelion clock, or a wedding bouquet was pressed as a keepsake. Flowers are one of the ways we mark particular moments in our lives, and jewellery is another. It’s small wonder, therefore, that flowers are a significant theme in the oeuvre of jewellery designers. In the same way that love consistently inspires poets, novelists and songwriters, it’s impossible to imagine collections by greats such as Peter Carl Fabergé, Louis Comfort Tiffany, René Lalique, Suzanne Belperron or Joel Arthur Rosenthal without the inclusion of stylish flora of their eras. Flowers crop up time and again, studied from every angle for inventiveness and reimagined to suit the prevailing whims of fashion.

I’m often drawn to comment on floral jewel trends and have explored antique naturalist approaches to design in my book Floral Jewels from the World’s Leading Designers, which sowed the idea for In Bloom, the upcoming selling exhibition at Sotheby’s New York.

Some of the flowers represented in pieces offered by Sotheby’s in this sale, such as the yellow-stone trumpet of Oscar Heyman’s daffodil – a flower which in perfect timing raises its golden head during springtime – are currently out of season. A flower’s fragility, transience and rich symbolism never withers or fades when rendered as a jewel.

These floral jewels aren’t simply solid objects. Part of a flower’s attraction is the charm of its irregularity and complex curves, giving life to the plant’s movement. The jewels on show offer this naturalism. The shape of Boucheron’s Fleurs Eternelles ring is biologically and botanically correct, as it’s been created from actual petals. A flower’s contours and structure are scanned and preserved by an “artist-petallist”, then stabilised with a microscopically thin layer of lacquer, before the golden corolla and centre stone are added to complete the precious realism.

A contemporary peony in full bloom by Eliane Fattal has 19th-century elements wound organically around its golden foliage, all hung with a 3.31ct fancy deep-brown diamond. “Peonies have been the ‘king of flowers’ in China since the Tang Dynasty,” says Fattal. “It’s symbolic of love and good fortune.”

You can trace the trail of fashions in flowers from the signed jewels of the grand Parisian Maisons Cartier and Van Cleef & Arpels, who acted as “florists” for the voguish women of the 19th century, to the exquisite Tiffany & Co. watch brooch, coveted in its day by jazz-age flappers, or the bouquet of multi-coloured sapphires and rubies by Trabert & Hoeffer Mauboussin, circa 1940, redolent of the type pinned to the latest Mainbocher suit lapel by the Duchess of Windsor’s set.

Amid the antique and vintage you can spot fresh contemporary names in jewels, such as Alessandro Sabbatini and Tatiana Verstraeten, launched by British Vogue last year as a rising star in the jewellery firmament, who has created a winged-petal collar shimmering with hand-mixed enamel and gold scattered with diamonds.

Some pieces created for the exhibition appear to mimic the landscape where they were fashioned, such as the showy hibiscus flower by India-based fine jeweller Bina Goenka, with rubies luscious enough to attract a cloud of tropical butterflies, or Gimel’s delightful pink diamond violet, resonating with a sense of modesty and calm similar to that inside her Japanese workshop.

Intrepid orchid hunters searching for the elusive plant in the tropics of Asia and South America, to ship back to Gilded Age hothouses, would have nurtured a bloom in the vivid shades of candy-pink phosphosiderite, green turquoise and yellow tourmalines used by Lydia Courteille – colours which fascinated bejewelled creatures to crawl onto its petals. “It’s the most coveted of ornamental plants,” explains Shaun Leane of his handmade exotic orchid studs, with a natural fancy vivid-green diamond at the centre, trailing tsavorites and diamonds around the ear.

Often flowers have been cultivated in cottage gardens and orchards with the dual purpose of feeding body and soul. Citrus flowers, with their zesty green and white sprigs, are visible atop the life-size lemon earrings – set with 1,297 yellow sapphires – appearing to glow with warmth from the bright Sicilian sun, where they were plucked from the fertile minds of Stefano Gabbana and Domenico Dolce. The colour, nature and traditions of Sicily act as a muse to the designers for their fine jewellery collections. Layers of foliage and ivy are tangled in lagoon-coloured tourmalines, emeralds, corals, tsavorite garnets and South Sea pearls, like tenacious climbers seen tumbling over sun-drenched bricks somewhere along the Mediterranean coast. The designers interpret them with their choice of stones, conferring immortality on their vision of Italian nature.

Nothing compares to an early morning garden as the leaves and petals shake off the dew, charging the air with a rush of scent as buds unfurl to release their prismatic display of freshly coloured clusters balanced on spiky stems. Beyond an accessory, a floral jewel provides the key to this garden, taking us back to harmony, to the essence of nature. These objects are both subtle and robust at the same time, with miniature leaves and tiny mosaics of stones that blossom into something of substance, as the brief life of a bloom is preserved into something everlasting. "

Discover More About the Jewels 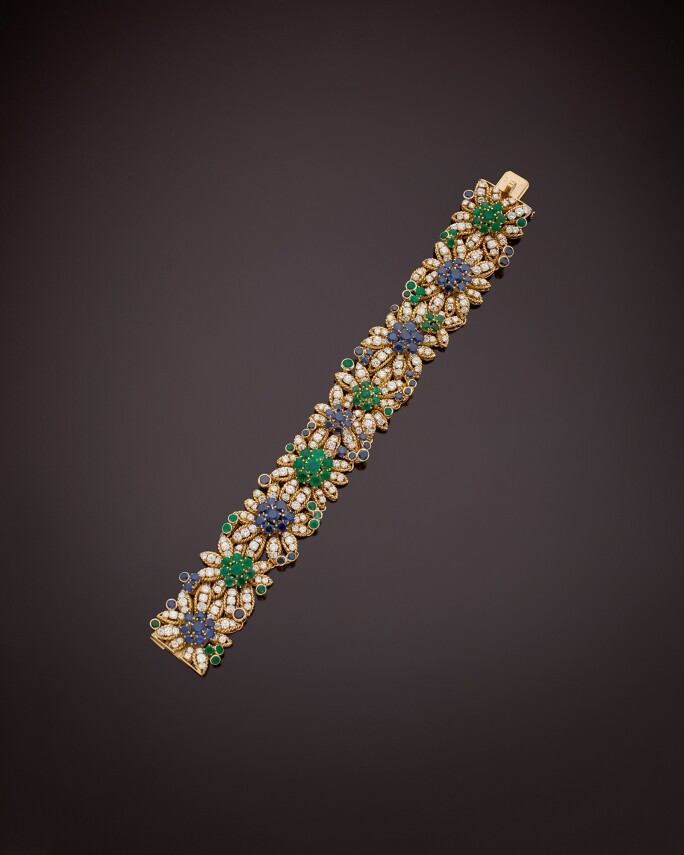 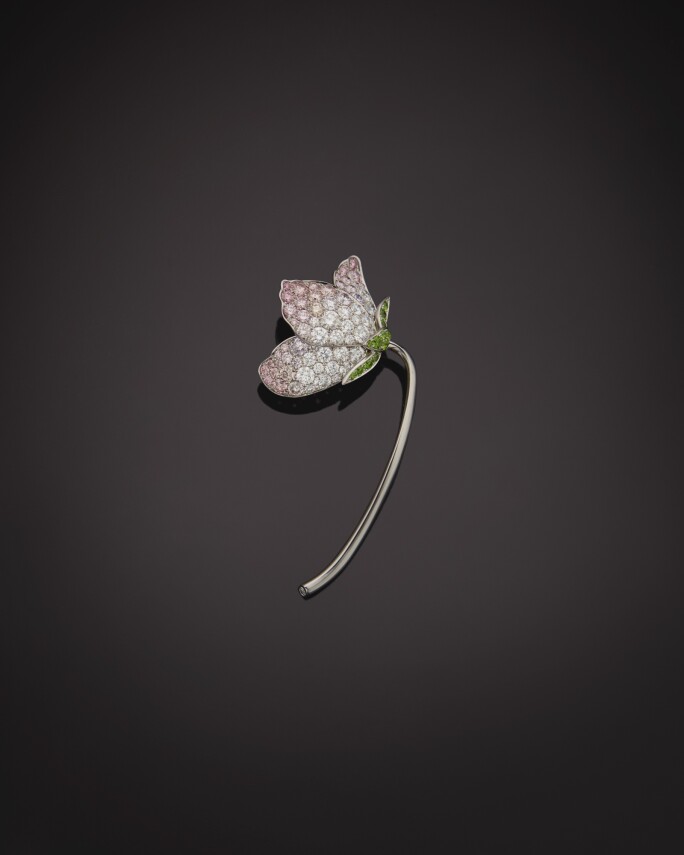 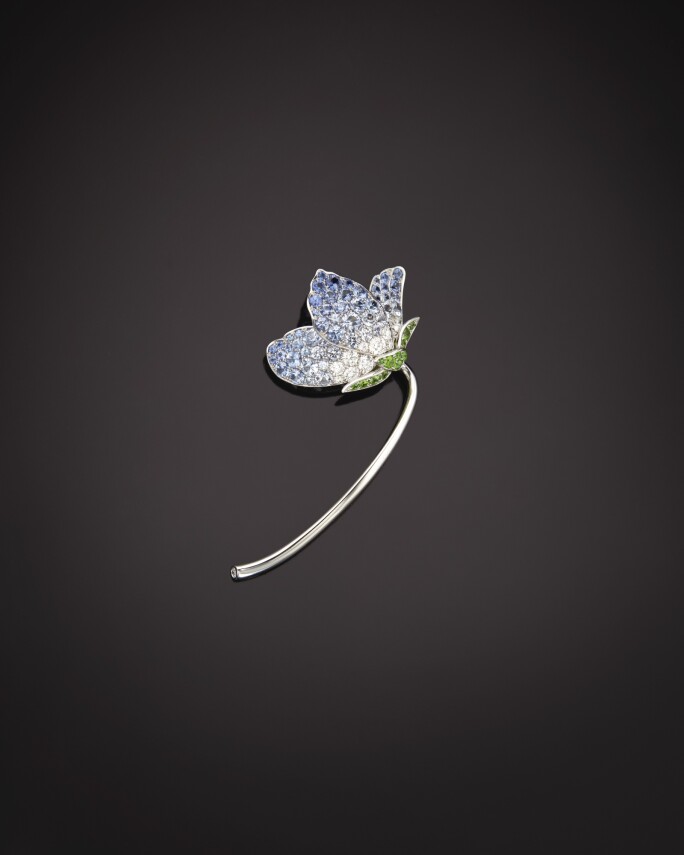 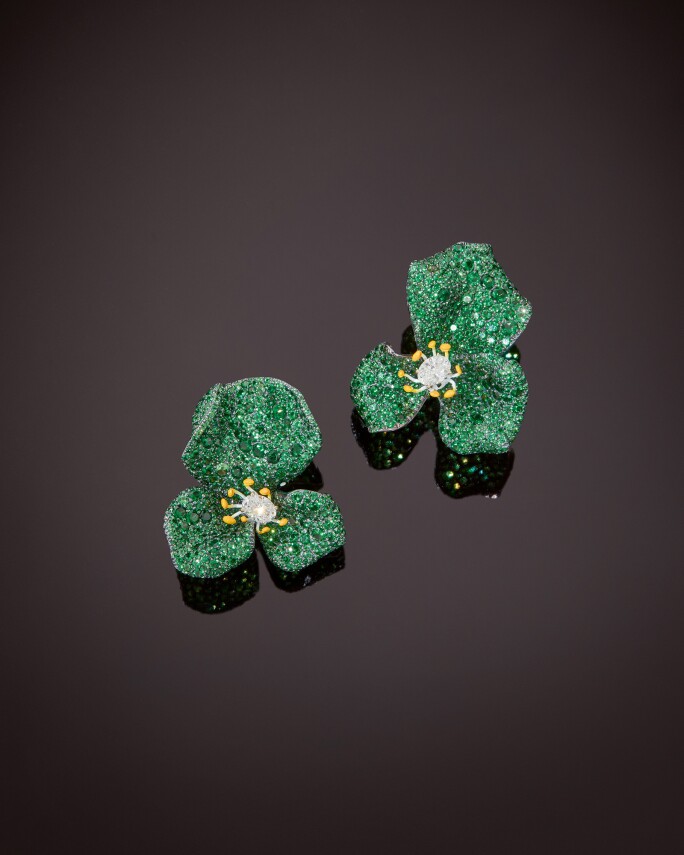 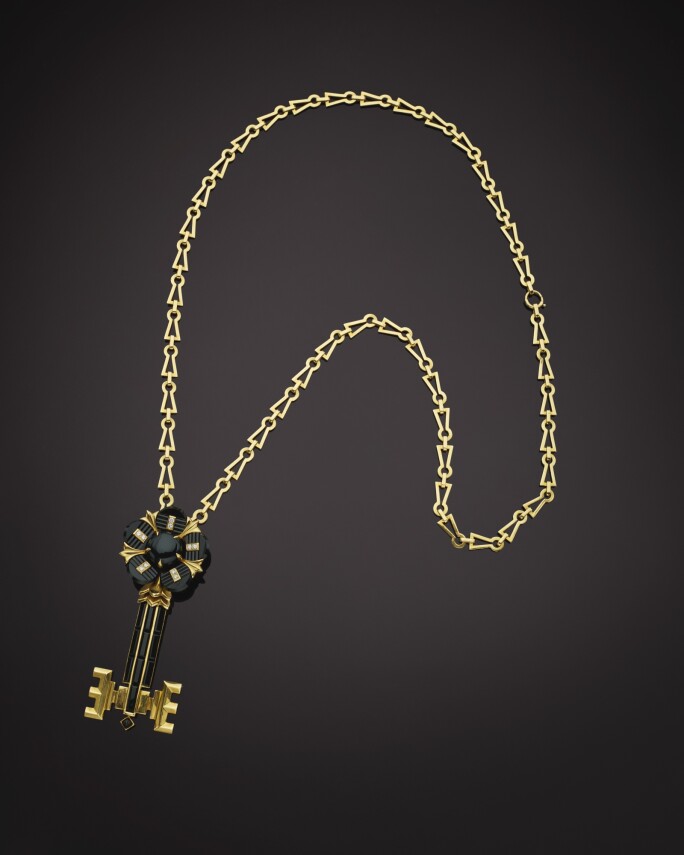 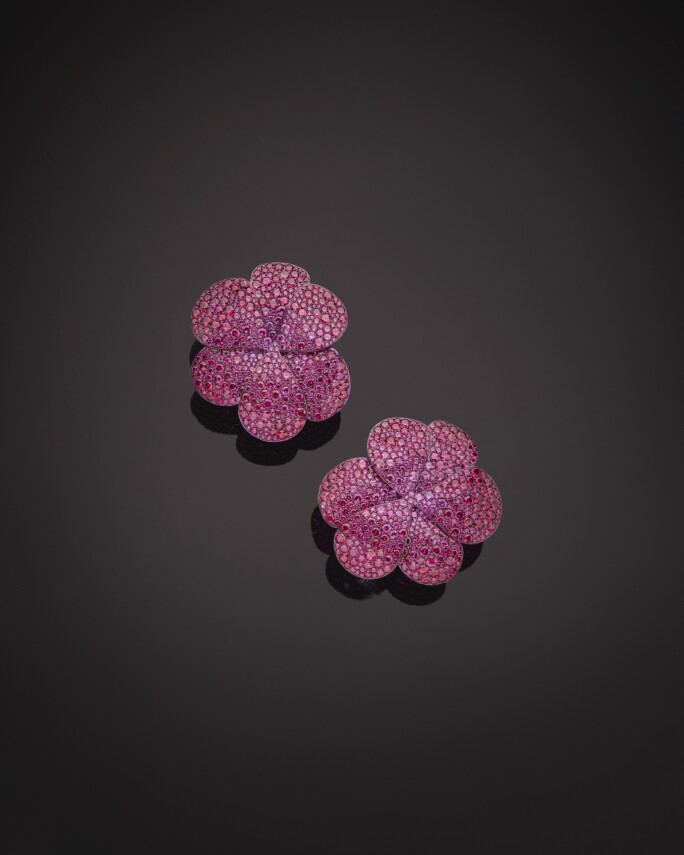 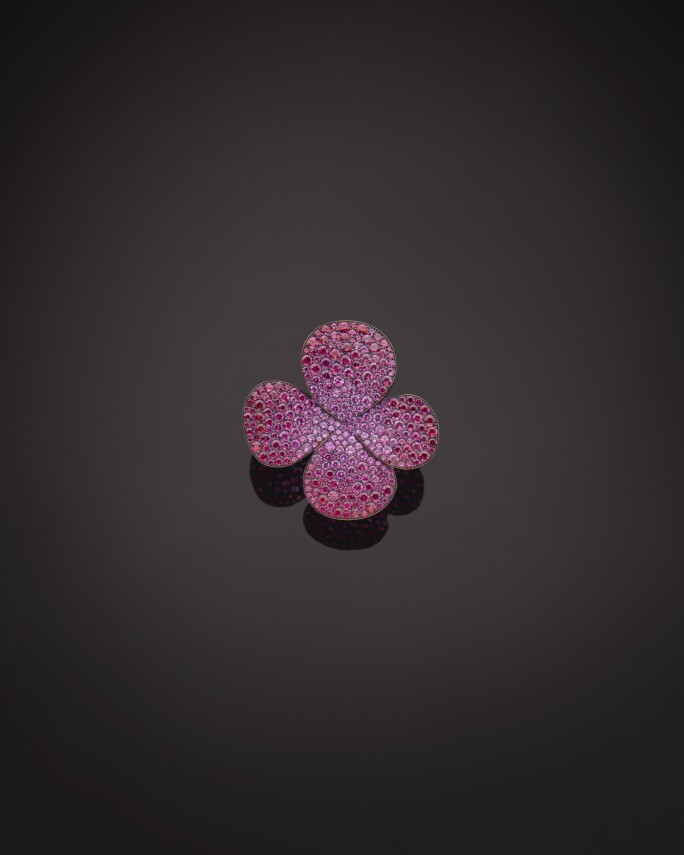 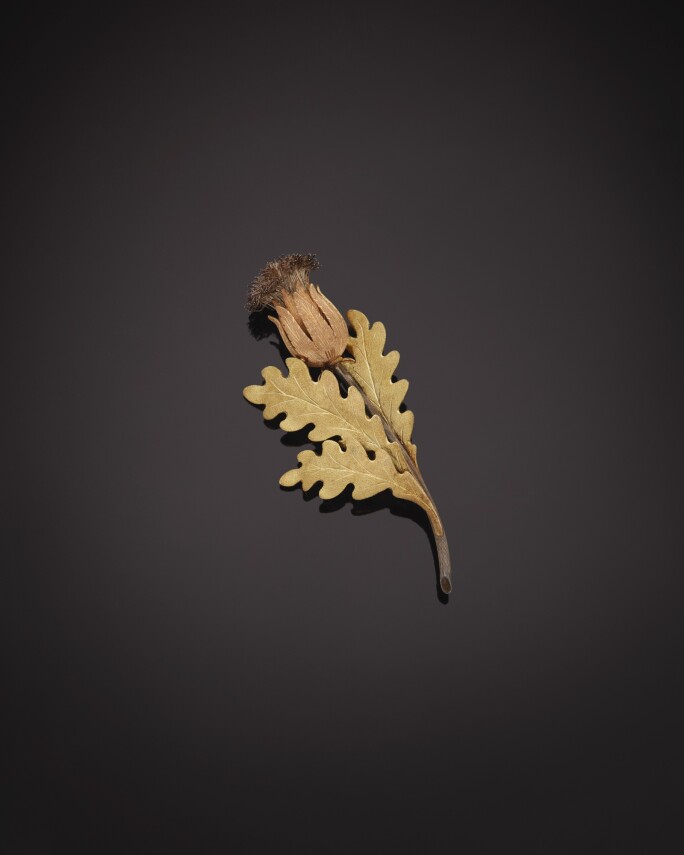 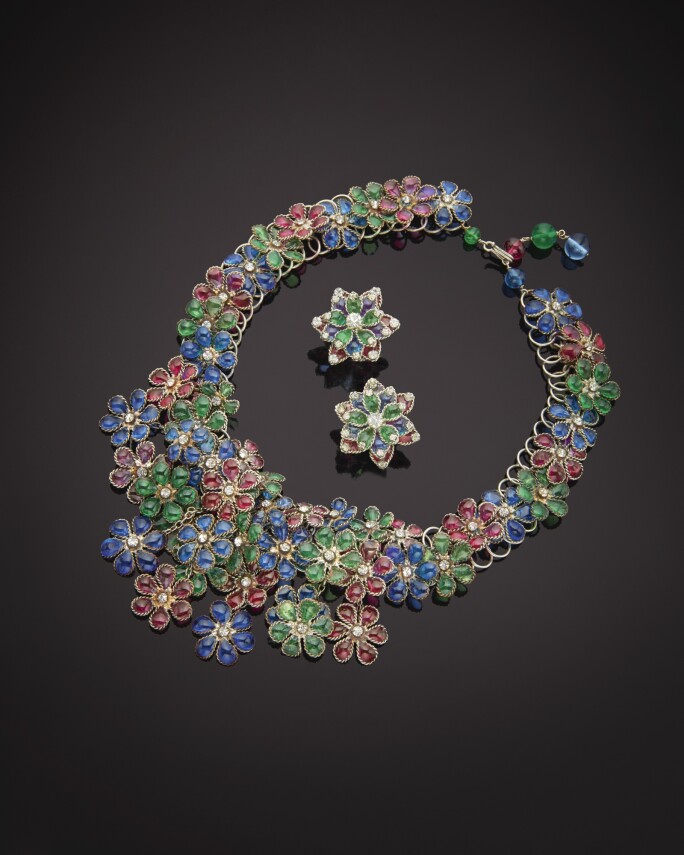 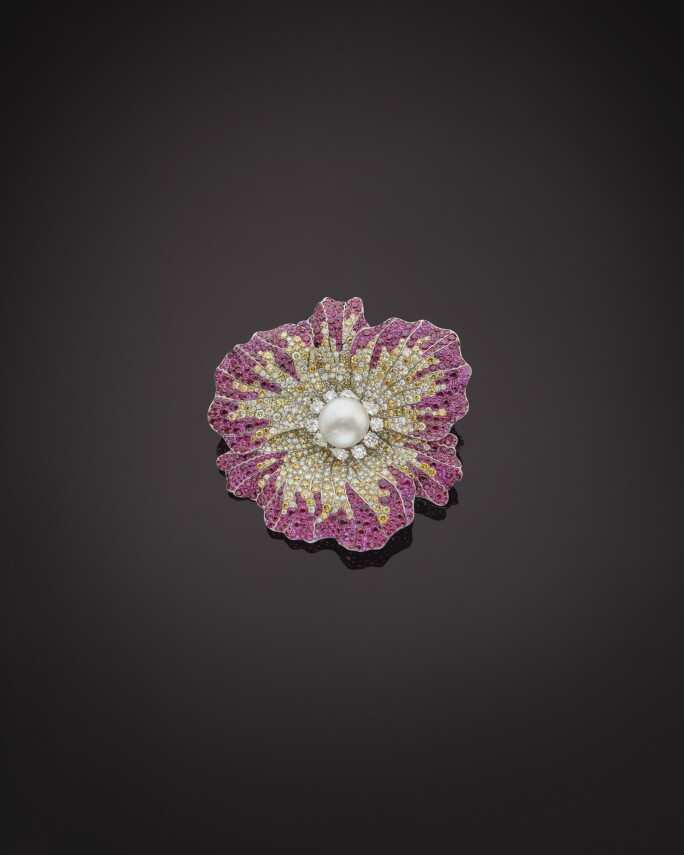 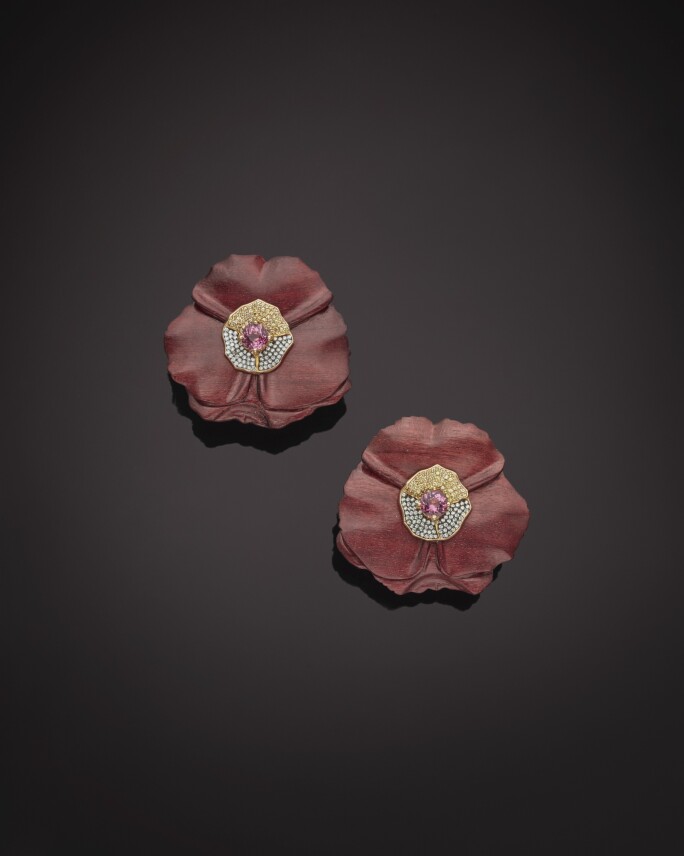 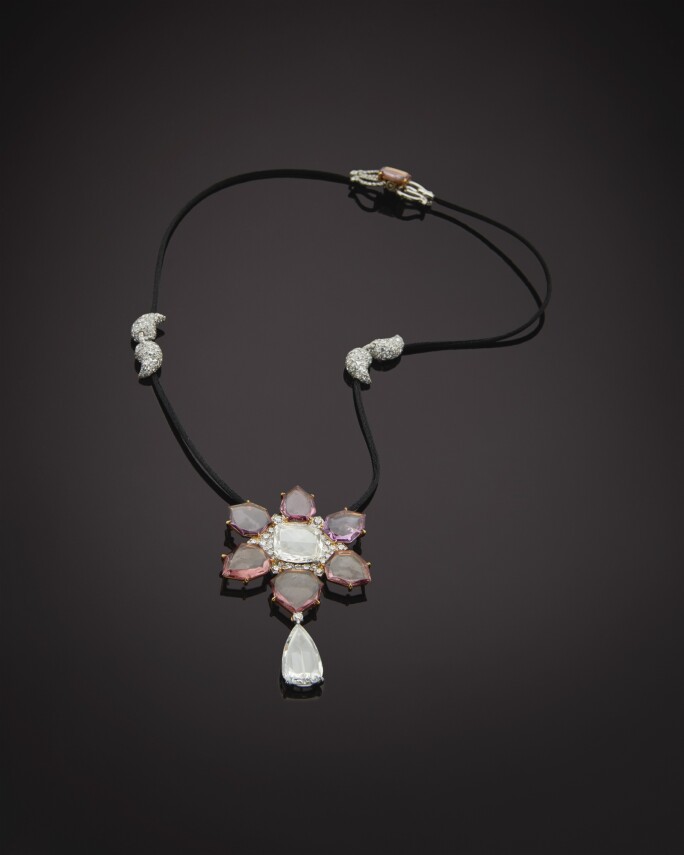 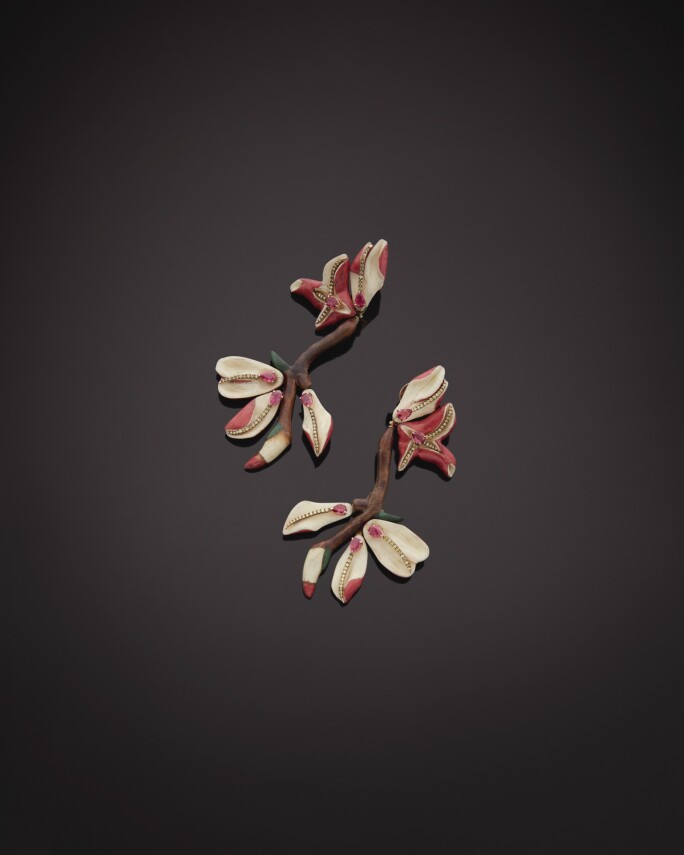 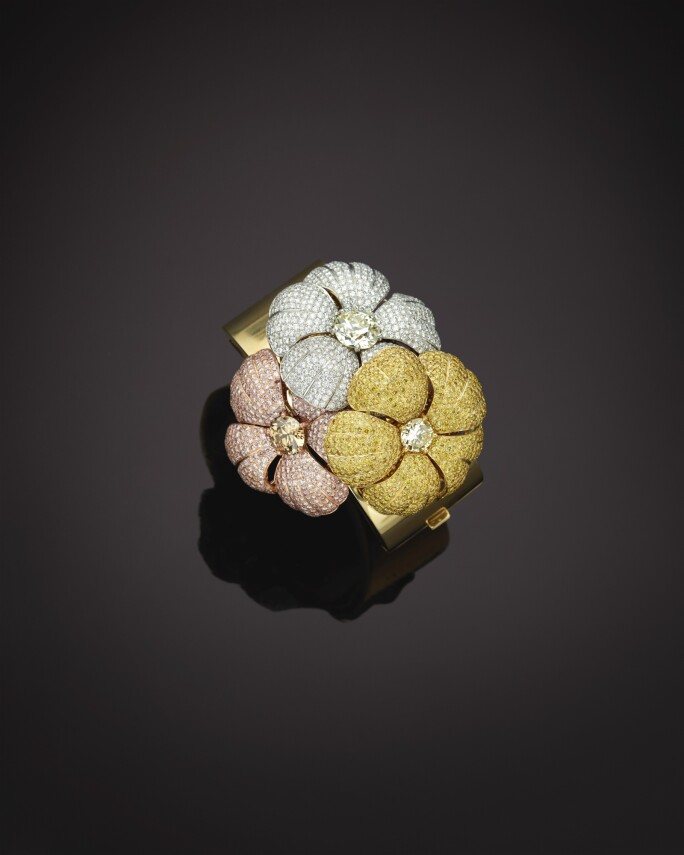 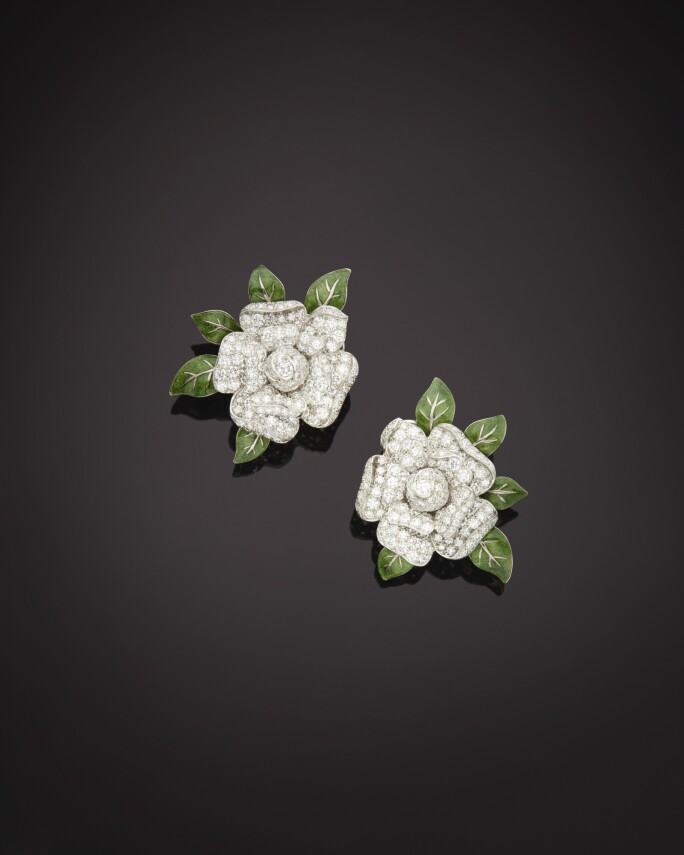 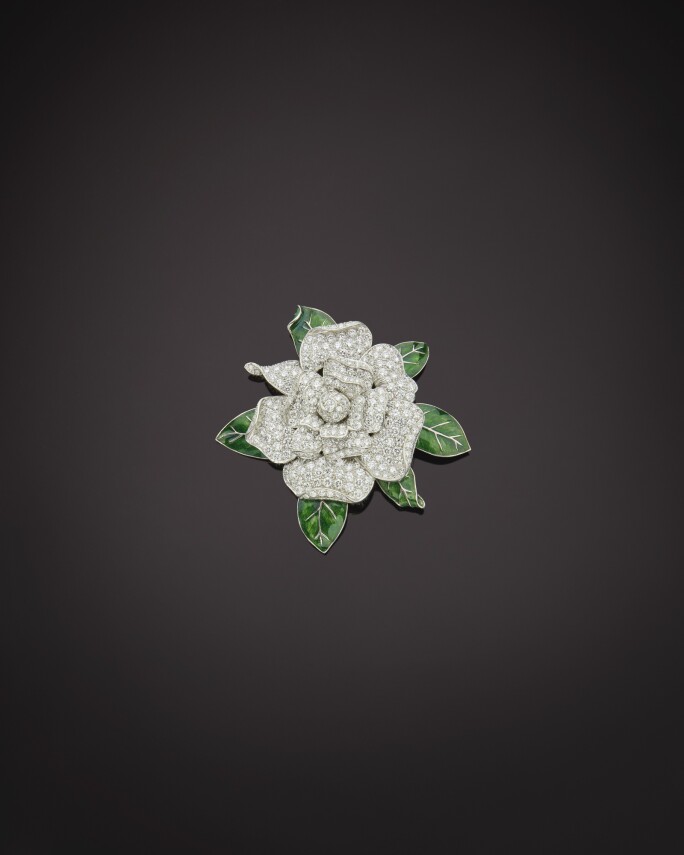 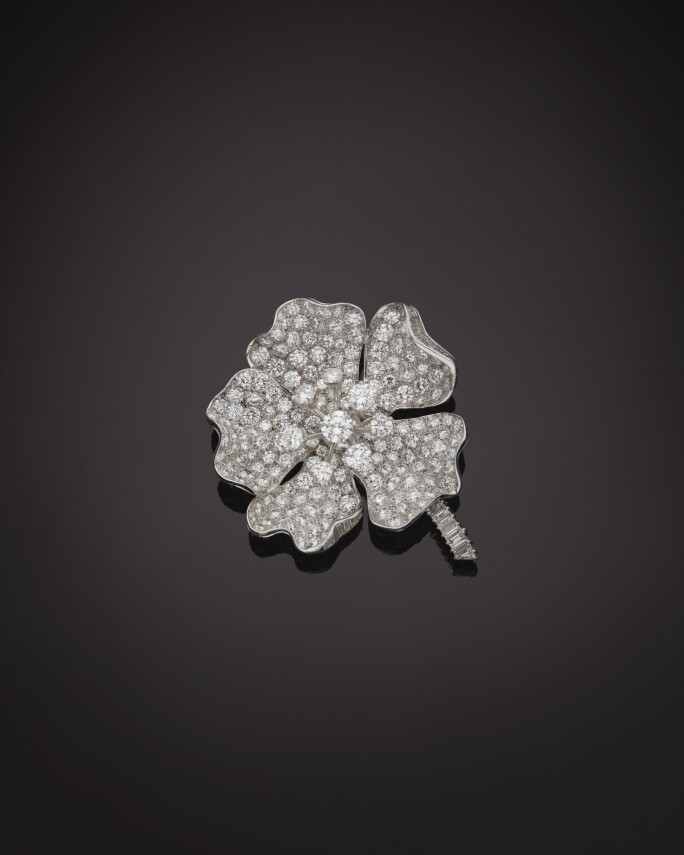 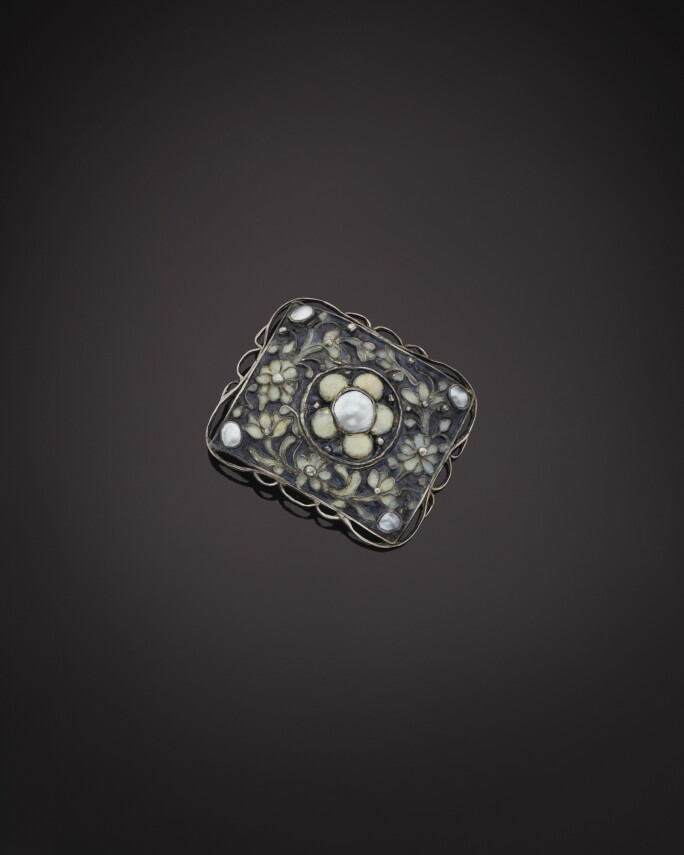 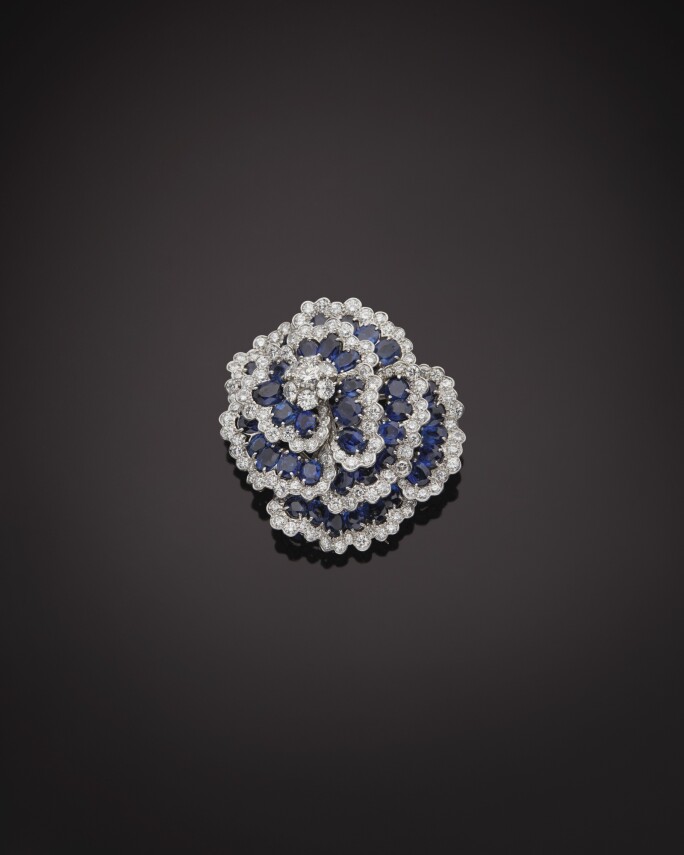 Carol Woolton is a jewellery historian, editor and the author of four books including Floral Jewels from the World’s Leading Designers. She is contributing director of jewellery for British Vogue

Curated by Carol Woolton and Sotheby’s Frank Everett, In Bloom is a selling exhibition of Floral jewels, and will be on view at Sotheby’s New York from 3–24 May