The Power of the Cuff Bracelet

A s style statements go, the jewelled cuff bangle has made some of the strongest and most memorable in the history of 20th-century fashion and femininity: Gabrielle “Coco” Chanel’s truly iconic and ever-present cream enamel and gem-studded Maltese cross bangles, designed for her by Fulco, Duke of Verdura; Marlene Dietrich’s monumental jarretière cuff, made in 1937 by Van Cleef & Arpels, and worn in Alfred Hitchcock’s Stage Fright (1950); Diana Vreeland’s immense ivory armlets, paired with a giant tusk pendant; Jacqueline Kennedy Onassis’s rich, crumpled gold cuffs by Van Cleef & Arpels; and Elsa Peretti’s 1970s organic and archetypal silver bone cuff. The cuff was – and still is – a new jewel for a new generation of independent, working women.

The cuff was – and still is – a new jewel for a new generation of independent, working women.

Armour-like, yet sensual and sophisticated with a touch of ferocity, the cuff exudes a whiff of dangerously exciting hyper-femininity, with a tantalising hint of fragility – a sense of something secret and precious, locked away and untouchable.

To click a jewelled cuff around the wrist, or better still, a matching pair (as Daisy Fellowes always did, “for balance,” she said), is to feel both comforted and empowered, and instantly, unassailably glamorous.

A lusciously gold and gem-shackled wrist can be seen and enjoyed by the wearer herself, waved around to enliven or even start a conversation, to underline personality and, of course, to express style. Just as femininity can be bold and warrior-like, and fashion has become more tailored and streamlined, so too has the bracelet grown up and toughened up. A perennial classic, the cuff is back in a big way.

A perennial classic, the cuff is back in a big way.

From a design point of view, too, the cuff bangle offers designers and jewellers a blank canvas for seemingly endless artistic expression: the opportunity to be strong, graphic and modern, but also fabulously decorative and opulently bejewelled. The cuff can serve to tell stories, or it can play on emotive associations, with tribal ornament, edgy hardware, or provocatively, a corset.

Cuffs can run the gamut of 20th-century cuff creativity: a Verdura agate bangle, topped with a 19th-century coral, gold and enamel foliate plaque, that must have originally been a brooch, adds a new interpretation to Coco’s signature cuffs; the Boucheron bangle, with its stylised buckle and ribbon translated into silky mystery-set sapphires, tells of the immense change that came over jewellery in 1937 – the plumped up geometry, the sense of rolling, rocking mechanical movement, the exuberance of rich yellow gold and colour after the flat cool streamlining of Art Deco.

The cuff tells of the immense change that came over jewellery in 1937.

It tells too of the huge fashionability of the cuff in the “cocktail” age of the 1940s, the power-jewel of its time. And in Buccellati's spectacular bangles you’ll find the cuff’s connection to fashion and fabric: gold and diamonds poetically transformed into lace and silk, through the artistry and sublime craftsmanship of this Italian master goldsmith and jeweller. It’s all in the wrist. 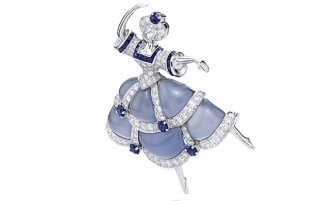 Vivienne Becker is a jewellery historian and contributing editor for FT’s How to Spend It.