By Sotheby's
S otheby's Magnificent Jewels auction (17 April, New York) presents three pieces whose exceptional beauty is only second to their rare provenance. Step back in time to visit the origins of these jewels: a circa 1930 tutti frutti bracelet , an Art Deco Cartier brooch and a turn-of-the-century demi-parure made by Paulding Farnham for Tiffany & Co. 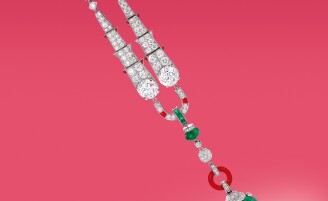 1. A Tutti Frutti Bracelet from the Collection of Mrs. Cole Porter's Niece

Epitomizing the marriage of Eastern exoticism to Art Deco design, tutti frutti jewels by Cartier are held up as masterpieces of the jeweler’s art. After first being exhibited at the 1925 Exposition Internationale des Arts Décoratifs et Industriels Modernes in Paris, the style rapidly gained popularity among the most fashionable women and discerning jewelry collectors of the day, including Mrs. W.K. Vanderbilt, Daisy Fellowes and Mrs. Cole Porter. Though unsigned, the bracelet offered here is notable for its preponderance of telltale elements: carved colored stones of varying shades and qualities (in-keeping with the Moghul style); scrolling diamond vines highlighted by drill-set onyx beads; enameled saw tooth patterns applied at the terminals; and a foldover tab clasp. The bracelet closely resembles two examples made for Mrs. Cole Porter between 1925 and 1929. The association with Mrs. Porter continues, for this piece is known to have been in the collection of Linda Lee Colgate, the niece and namesake of Mrs. Porter. The bracelet, along with a complementary double-clip brooch (lot 150) descended through the family, first as a wedding gift and, more recently, as an inheritance.

Of all the works produced by Cartier since its founding in 1847, it is their dazzling creations from the Art Deco period that epitomize the firm's unparalleled innovation, style and craftsmanship. Instantly recognizable and timeless in design, Cartier's Art Deco jewels represent one of the great highpoints in the history of jewelry. This pendeloque is another illustration of the firm’s marriage of Eastern and Western influences. A rare discovery, the piece is a notable contribution to the published canon of Cartier jewels. Its lithe, columnar form—originally intended to drape off the shoulder—was inspired by the Indian sarpech, a jeweled turban pin that dangled like a tassel over the eyebrow. According to historian Hans Nadelhoffer, Cartier discovered the sarpech form indirectly through the fanciful orientalist costumes of the Ballets Russes, transforming theatrical fantasy into some of the most popular decorative motifs of the period. In a nod to contemporary fashion, this piece's attenuated silhouette and highly articulated diamond-set panels echo the increased mobility of drop-waist flapper dresses designed to swing along to the exuberant tones of the Charleston.

3. An Art and History-Inspired Necklace from Paulding Farnham for Tiffany & Co.

Paulding Farnham was the creative genius responsible for the original design of this necklace, which was the only jewel by him that Tiffany & Co. displayed at the 1904 St. Louis World’s Fair, an exhibition to celebrate the centennial of the 1803 Louisiana Purchase. At first glance the necklace appears to be decorated with a synthesis of motifs borrowed from Renaissance art and architecture. Stylized jardinières, nymphs and naiads, gargoyles, shield shapes, palmettes, acanthus leaves, scrolls and arabesques, are all gracefully combined into a harmonious flowing pattern decorated with colorful enamel. However, upon closer inspection towards the back of the necklace near the clasp, Farnham has specifically included two figures of the Knights Templar, which would likely be historical references to the French King Louis IX who lead the Seventh Crusade (1248-1254 A.D.) and after whom the city of St. Louis is named. The fleur-de-lys is another recurrent motif throughout the design of the necklace and also quarters each of the platinum settings surrounding the rose-cut diamond-set links. It is of course the symbol associated with the city of St. Louis, and it is surely why Farnham intentionally chose it for this jewel. Works by Paulding Farnham rarely appear on the market, but some important pieces have made their way into private collections and museums including the Metropolitan Museum of Art and the Cooper-Hewitt in New York, The Brooklyn Museum, The Walters Art Gallery in Baltimore and the Museum of Fine Arts, Boston.

The Tiffany & Co. Jewels that Dazzled the 1904 World’s Fair

Department
Discover a World of Diamonds at Sotheby's
Stay informed with Sotheby’s top stories, videos, events & news.
Receive the best from Sotheby’s delivered to your inbox.