The Life of Hester Diamond

R ecently married, Hester and Harold began the 1950’s trying to reconcile their mutual love of art with the need to make a living. Hester began a secretarial job at Stair and Company, a leading antiques dealer on 57th Street, and Harold became a fourth-grade teacher. She quickly established herself at Stair and developed both a love of early English furniture and a keen eye for the material. Meanwhile, as they were making the rounds of the 57th Street galleries, Harold became friendly with Martha Jackson, the owner of an important gallery of cutting-edge contemporary art. Over time, Harold and Hester established themselves as part of that world. Around 1956, Harold was asked by a client to locate a particular Henry Moore. The assignment required securing three extra vacation days over the Thanksgiving holiday for a trip to Europe. When the school’s principal refused permission, Harold quit his $3,500 a year job and in lieu of the $5,000 commission on offer. His career as a full-time art dealer was launched and the couple’s life was never the same.

I n the early 1970’s, Harold’s largest clients were Seward and Basia Johnson, an heir to the Johnson & Johnson Company and his young wife, who had trained as an art historian. The Johnson’s became avid collectors of high-level modern painting and sculpture and found themselves in need of help managing and displaying their newly acquired treasures. Hester had always enjoyed decorating and offered to help. Hester’s particular focus was developing interiors which highlighted important works of art while simultaneously developing environments which held together aesthetically and were comfortable places to live. Hester designed and furnished two homes for the Johnson’s and soon found herself with a huge job and a going business. Hester found the time to take on other clients and eventually built her business into a good-sized and highly profitable venture, designing and decorating homes for a variety of serious collectors who needed help reconciling their desire to collect with their need to live their lives. Hester’s unique ability was to provide these clients with homes which were both showplaces for art and wonderful places to live; she also had an uncanny ability to mix and match art and furnishings of different nationalities, styles and dates. Hester continued in the decorating business for almost 30 years, eventually retiring from the active business of decorating other people’s homes in the late ‘80’s but continued to actively redecorate her own homes until the last year of her life.

H ester’s personal taste and style were ever-evolving. Her crowning achievement was the Wallace Harrison house in Huntington, Long Island, which Harold and Hester convinced Harrison to sell to them, as they were prepared to bring it back to its former glory. Built as a modernist statement in the ‘30’s, Hester managed to return it to its art deco aesthetic while simultaneously updating it to 1970’s standards and making it a spectacular getaway house for her husband Harold and three children. The entire house was a remarkable accumulation of amazing objects. Hester’s personal style was similarly unusual. She had no interest in the latest dresses from the major designers, but instead had a closet full of remarkable clothes purchased from boutiques around the world, found on her travels, discovered at various craft fairs she would attend and purchased directly from a few designers whose work she admired.

C ollecting is a gene. You either have it or you don’t and Hester had it many times over. Hester began collecting as a committed modernist, but her time working at Stair and Company led to a serious interest in English furniture. From relatively early on, throughout her homes, 18th Century English furniture was mixed in with more modern furniture and modern painting and sculpture. While many were surprised by the contrast, Hester instinctively knew how to make it work. Later, to fund her quest to begin collecting Old Masters, Hester sold a large Léger for a then record price of $11m and after that an important Cubist Picasso. Thus, began a decade long series of sales and acquisitions, with the original and new collections hung side by side throughout her large Central Park West apartment.

Sometime after Harold’s death in 1982, Hester wanted a new challenge and a new area to collect. She considered several fields, ultimately settling on Old Masters, specifically early Netherlandish and early Italian paintings. One day Hester realized that the number of Old Master paintings far outweighed the modern paintings; the visual mix no longer worked. In an uncharacteristic move, all the modern art was moved to the dining room. A few years later, she realized the modern art no longer had the same meaning to her - it was her old life, her old friends, her old interests. The next day she began the process of selling everything, with her usual speed and determination. Her then husband, Ralph Kaminsky, used to joke – “she got rid of everything except me, the Old Masters and the dog.” During this period, Hester also became interested in Old Master sculpture. As before, she sold paintings to fund her new passion, and eventually the three-dimensional works in her collection outnumbered the flat art.

H ester loved to travel, both to brand new places and to places (and people) she loved to revisit. She started seeing Europe in the late ‘40’s and early ‘50’s, as it was still recovering from the war, and eventually began the habit of spending the summer in Europe. After extensively covering Europe, her travel appetite continued to grow, and encompassed trips throughout the world, most often just a few years before places had “opened up” to Americans. All of her travels were focused on art – looking at ancient wonders, visiting all of the important museums and getting in touch with the local contemporary art scene. This habit continued after Hester’s marriage to her second husband, Ralph Kaminsky in 1985. Together and often with like-minded friends, they would travel to Europe several times a year, now to see art and also to hear Wagner and contemporary classical music concerts. They also visited more exotic locations and spent several years splitting their time between New York and Shanghai, which became both a second home for them and a base for deeper explorations into Asia. As late as 2018, Hester would travel to London or Rome for an important art opening or art fair, returning home 3-4 days later after also attending a continual stream of exhibitions, dinners and parties, and wondering aloud why she was so tired after such a short trip. Although she loved to travel, New York remained her home throughout her whole life.

F or Hester, people were more than just friends. They were a way to broaden her mind, expand her interests and to keep her young. She had friends of all ages, nationalities, professions and social-economic backgrounds. Her home was always open to individuals and groups, regardless of their supposed importance or status, who wanted to see her collections, talk about collecting or just meet her. When Hester’s stepdaughter, Rachel Kaminsky, became the Program Director for Artfully Dressed: Women in the Art World, by photographer Carla van de Puttelaar, Hester agreed to participate in the project. Prompted to comment on the industry by Carla’s project, Hester proclaimed:

“Women in the art business started to make their mark in Modern and Contemporary. I was right on time for that. They are barely beginning to be recognized in the world of Old Masters. It’s about time!”

T hroughout her life, Hester was a committed and focused philanthropist. She was always ready to provide support for cultural and social service organizations whose missions she supported and whose programs she thought were effective. Later in life, she chose to focus on a few charities that were especially important to her. Hester was a driving force behind two significant charitable organizations. She was one of the founders of the Medici Archive Project, an organization designed to provide support to the huge repository of documents and other materials belonging to the Medici family in Florence. In 2013, along with her friends Jon Landau and Fabrizio Moretti, she founded VISTAS (Virtual Images of Sculpture in Time and Space), an organization committed to the ongoing publication of serious new scholarship on sculpture within the European tradition from 1200-1800 through the publication of books and the creation of related websites which use cutting edge tools to provide 3-D images of specific artworks. 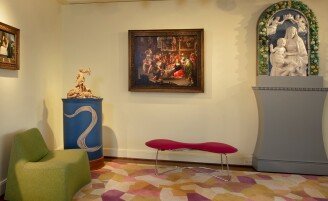 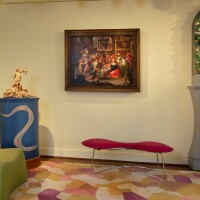